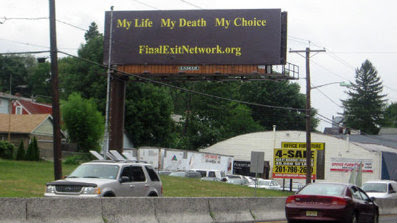 I have been repeatedly asked my views about the Final Exit Network advocacy billboards that push assisted suicide.  I was going to post on it, but I was interviewed by Fox News Network on the issue, and I think my comments to Fox’s reporter will suffice.  From the story:

A national right-to-die organization has launched a controversial billboard campaign to inform terminally ill and elderly adults that they have a right to end their own lives — but critics say the group is simply preying on vulnerable senior citizens and mentally unstable people.

Well, FEN has never advocated restricting assisted suicide to the terminally ill.  Moreover, they have assisted suicides of people who were not dying—a point I made abundantly clear:

But others say Final Exit’s mission is unethical ... and illegal. “The signs communicate a pro-suicide message that sends a dangerous message throughout society, including to people like the young who would not legally qualify for a lethal prescription,” said Wesley J. Smith, a California-based bioethicist who opposes assisted suicide. “I think they are trying to make themselves seem like an advocacy group rather than one in which some of its members engage in criminal suicide facilitation,” he said.

The story details allegations and pleas of FEN activists assisting suicides of people who clearly were not dying—which I covered here when it happened:

But Final Exit members, including Egbert, also are alleged to have been involved in the 2007 death of an Arizona woman, Jana Van Voorhis, who suffered from a serious mental illness, not a debilitating physical illness. Wye Hale-Rowe, then 79, and retired college professor Frank Langsner, who provided her guidance, as well as two other senior Final Exit officials — Egbert and Roberta Massey — were charged in the case that will go to trial next month. Hale-Rowe pleaded guilty in January to facilitation to commit manslaughter, a felony. She struck a plea deal with county prosecutors and agreed to testify against the three remaining defendants in the case...

Smith says the Voorhis case “shattered” the “pretense that the minions who participate in the Final Exit Network are mere counselors — rather than mobile assisted suicide clinics.”...Smith questions Final Exit’s judgment of “suffering” individuals and asks people to “take the time to look beneath the political posturing and the true agenda — death on demand for people with more than a transitory desire to die — comes clearly into focus.” “I think it is worth pointing out that the logic of these ideologues is impeccable. Once you accept the belief that killing is an acceptable answer to human suffering, assisting the suicides of the mentally ill — whose suffering is often far worse than those with physical illnesses — can become compelling,” he said.

Proof of my points are found in the last paragraph from an “alternative” suicide counselor—who is clearly pro suicide—wants people to be able to choose not to burden others by being made dead:

But Carolanne Cortese Barton of Alternate Group Counseling in Bayonne, N.J., says she sees the logic behind the billboard campaign, “because in life everyone has a choice, this really is all we have.” “Family traditions have changed and children are no longer able to take their elderly parents into their homes for care anymore and therefore have to send them to nursing homes,” Barton said. She said the billboards create awareness that there are options out there for people who are suffering and do not want their families to suffer further by paying for treatment and care.

Wow.  Honesty.  How unusual in the drive to legalize assisted suicide.  Whether she is right is the debate we should be having.
0
Print
Email
Prev Article
Next Article