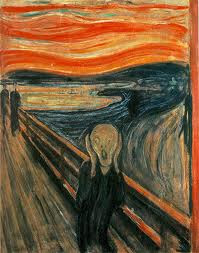 The problem of suffering and what do to about it has occupied philosophers and religious thinkers since humans first created civilization.  This concern has led to to the creation of great religions, such as Buddhism, and impelled some of us to astonishing acts of empathy and charity.  Indeed, our reaction to suffering sometimes leads to the best acts of of which human beings are capable.

But fear and loathing of suffering also drives some of us to leap screaming over the edge of reason.  For example, I once attended a transhumanist conference in which a speaker argued seriously that the minds of all animals should be uploaded into computers so they don’t suffer.  Along a similar vein, a university professor (natch!) from Rutgers named Jeff McMahan—who is also associated with Princeton’s Center for Human Values (led by Peter Singer)—advocates in the NYT that we should create what could be called a eugenics program for animals that would eventually eradicate all predators! From “The Meat Eaters:”

Viewed from a distance, the natural world often presents a vista of sublime, majestic placidity. Yet beneath the foliage and hidden from the distant eye, a vast, unceasing slaughter rages. Wherever there is animal life, predators are stalking, chasing, capturing, killing, and devouring their prey. Agonized suffering and violent death are ubiquitous and continuous.

Yes, which is why I laugh when humans are called evil for the pain we cause, when in fact, we are the only species that seeks to mitigate suffering.  But predation isn’t evil.  It is natural and necessary to maintain proper ecological balances.  Without predators, prey animals would overpopulate and eventually starve.

But back to the hysterical professor—who does go on, and on, and on!. After the obligatory castigation of factory farms, and discussing—at too great a length to reproduce in a blog—the various objections that could be raised to making predators extinct—he concludes:

Here, then, is where matters stand thus far.  It would be good to prevent the vast suffering and countless violent deaths caused by predation.  There is therefore one reason to think that it would be instrumentally good if  predatory animal species were to become extinct and be replaced by new herbivorous species, provided that this could occur without ecological upheaval involving more harm than would be prevented by the end of predation.  The claim that existing animal species are sacred or irreplaceable is subverted by the moral irrelevance of the criteria for individuating animal species.  I am therefore inclined to embrace the heretical conclusion that we have reason to desire the extinction of all carnivorous species, and I await the usual fate of heretics when this article is opened to comment.

Ah, the life of a tenured professor—paid a lot of money to spout nonsense—and you can’t be fired. What a racket.

Of course, we will never eradicate predators, the discussion about which might be fun over a beer, but ultimately as meaningful to real life as a game of monopoly.

So, why do I bring it up?  Because McMahan’s advocacy reflects an unhealthy obsession with suffering that I think is hurting society. This fear drives the euthanasia movement, has led to animal rights ideology, and fosters radical environmentalism. The suffering obsession causes some of our leading intellectuals to advocate infanticide and has given rise to a new eugenics that would wipe people with disabilities such as Down syndrome off the face of the earth.  It has led to the creation of a Utopian meme that we should strive to not just mitigate suffering—which no one opposes—but actively seek to eliminate it, no matter how Draconian and extreme the “cure.” And therein, as history shows—and we are watching it unfold again before our very eyes—lies the potential for the infliction of terrible destruction in the hope of creating heaven on earth.
0
Print
Email
Prev Article
Next Article