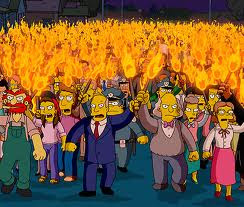 Yes, it’s the law—for now. But most Americans oppose it.  The Republicans are running on repealing it. The democrats are running away from it.  Obamacare is on the rocks and may yet die a’borning.

Don’t take my word for it.  None other than an editorial in the New England Journal of Medicine is sounding the alarm (it supports the law).  From “The Midterm Elections: High Stakes for Health Policy:”

The stakes for health policy in the 2010 congressional elections are higher than they have ever been. The political parties are polarized. Policy divisions are deep. The challenges of implementing the Affordable Care Act (ACA) are enormous. The outcome of the 2010 congressional elections may well determine whether this landmark legislation succeeds or fails. Whatever the electoral outcome, the political battle over health care reform will continue into the 2012 presidential elections and probably beyond.

Yup. That’s what happens when a party arrogantly shoves an unpopular law down the throats of the other major party-and in this case, the American people.  There is no sense of comity in the wake of defeat.  There is no desire to shake hands and go have a beer.  There is, instead, lingering anger and resentment.  We aren’t serfs. We react.  Indeed, we rebel politically.

A more serious possibility is that ACA opponents could deliver on another pledge: to cut off funding for implementation. Here is how such a process could work. Customarily, substantive legislation “authorizes” spending, but the funds to be spent must be separately “appropriated.” The ACA contains 64 specific authorizations to spend up to $105.6 billion and 51 general authorizations to spend “such sums as are necessary” over the period between 2010 and 2019. None of these Congress enacts specific appropriation bills. In addition, section 1005 of the ACA appropriated $1 billion to support the cost of implementation in the Department of Health and Human Services (DHHS). This sum is a small fraction of the $5 billion to $10 billion that the Congressional Budget Office estimates the federal government will require between 2010 and 2019 to implement the ACA.4 The ACA appropriated nothing for the Internal Revenue Service, which must collect the information needed to compute subsidies and pay them. The ACA also provides unlimited funding for grants to states to support the creation of health insurance exchanges (section 1311). But states will also incur substantially increased administrative costs to enroll millions of newly eligible Medicaid beneficiaries. Without large additional appropriations, implementation will be crippled.

That paragraph tells you what is so wrong with the law. Look at the bureaucracy!  Look at the centralization!  Look at the complexity!  And here’s what will happen if anti-Obamacare candidates prevail in November:

If ACA opponents gain a majority in either house of Congress, they could not only withhold needed appropriations but also bar the use of whatever funds are appropriated for ACA implementation, including the implementation of the provisions requiring individual people to buy insurance or businesses to offer it. They could bar the use of staff time for designing rules for implementation or for paying subsidies to support the purchase of insurance. They could even bar the DHHS from writing or issuing regulations or engaging in any other federal activity related to the creation of health insurance exchanges, even though the ACA provides funds for the DHHS to make grants to the states to set up those exchanges.

Bingo. At that point, President Obama would have to compromise—if he even understands the term—and permit substantial revisions of the law.  If he doesn’t, Obamacare will die a’borning, and he will be a one term president.

The editorial takes a much darker view of the political impasse that could result-a law that survives, but limps:

Perhaps the more likely — and in some ways more troubling —possibility is that the effort to repeal the bill will not succeed, but the tactic of crippling implementation will. The nation would then be left with zombie legislation, a program that lives on but works badly... The strategy of consciously undermining a law that has been enacted by Congress and signed by the president might conceivably be politically fruitful in the short term, but as a style of government it is a recipe for a dysfunctional and failed republic.

Well, that’s a bit alarmist.  But what are we supposed to do—just give in to our overseers?  Obamacare was enacted in contravention of the will of the American people. The responsibility for any dysfunction flowing therefrom must fall on those who thought they knew better than the people whom they represent.

If Obamacare is repudiated in the coming election, the president should heed the will of the people and cooperate in making substantial changes that can earn the support of the majority of the electorate.  That is how free countries are supposed to work.
0
Print
Email
Prev Article
Next Article