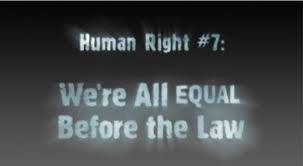 I was alerted by Nat Hentoff about an assertion made by Peter Singer—as reported in the Catholic Eye—at a  Princeton conference around the abortion question, in which he claims that human beings don’t possess full moral status until after the age of two. I checked it out for myself. Yup. From my transcription of Panel II on 10/15/10 (press “Event Videos,” 20101015-panel two, to link to access streamed session) :

Q (beginning at 1:25:22): When discussing at which point after birth we would give full moral status, you gave...a legal or public policy point about practicality... Forgetting the practical or public policy questions, if a person is a self aware individual and self awareness isn’t conferred by birth, and we use mirror tests to determine self awarness...at what point do you think an infant would pass the mirror test and therefore be self aware and be considered a person.

Singer (beginning at 1:27:18): ... My understanding is that it is not until after the first birthday, so somewhere between the first and second, I think, that they typically recognize the  image in the mirror as themselves...Really, I think this is a gradual matter. If you are not talking about public policy or the law, but you are talking about when you really have the same moral status, I think that does develop gradually. There are various things that you could say that are sufficient to give some moral status after a few months, maybe six months or something like that, and you get perhaps to full moral status, really, only after two years. But I don’t think that should be the public policy criteria.

That point aside, what did Singer say the public policy should be, which is just a way, in my view, of weaseling out of the implications of his beliefs. Starting at 56:22, after stating he no longer holds that an infant does not have a right to life until 1 month after birth because it is “not a practical suggestion,” Singer says:

Maybe the law has to have clear bright lines and has to take birth as the right time, although maybe it should make some exceptions in the cases of severe disability where parents think that it is better for the child and better for the family that the child does not live...The position that allows abortion also allows infanticide under some circumstances...If we accept abortion, we do need to rethink some of those more fundamental attitudes about human life.

The last comment is very telling.  Abortion was once widely disdained, and was nearly universally illegal except for medical reasons. It is now broadly accepted because our perception of the value of fetal life changed, and is legal throughout most of the West. If we accept Singer’s views that children, perhaps past the age of two, do not possess full moral status, it would similarly change our perceptions about their lives, and ultimately lead to horrible practices and a concomitant change in public morality and law.

The Netherlands and its infanticide permissiveness further illustrates this process. Dutch doctors commit infanticide and nothing is done about it by authorities, even though it is technically murder, even though doctors have publicly published the guidelines they use in deciding which babies to kill.  And there is already talk about full legalization of infanticide—which was the incremental method used to move general euthanasia for those age 16 and up to full legality in the Netherlands.

We need to hear very clearly what Peter Singer advocates, and understand the consequences that would flow from accepting his brand of utilitarianism. Then, we need to run in the opposite direction and fully embrace human exceptionalism.  That is the only way to protect the lives of the weak and vulnerable specifically, and more broadly, guarantee universal human rights.
<a onblur=”try {parent.deselectBloggerImageGracefully();} catch(e) {}” href=”http://2.bp.blogspot.com/_OEoNzDCQX5s/TOtcZLLoS8I/AAAAAAAADfk/SV-AT8EB2iE/s1600/equal.jpg”><img style=”float: right; margin: 0pt 0pt 10px 10px; cursor: pointer; width: 303px; height: 166px;” src=”http://2.bp.blogspot.com/_OEoNzDCQX5s/TOtcZLLoS8I/AAAAAAAADfk/SV-AT8EB2iE/s400/equal.jpg” alt=”” id=”BLOGGER_PHOTO_ID_5542625353977580482” border=”0” /></a>
0
Print
Email
Prev Article
Next Article