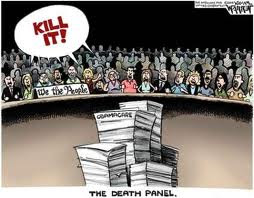 After my earlier post here about the Obama Administration decision to rescind the end of life counseling compensation regulation—just a week after promulgating it—NRO asked me to opine further.  I cranked up the old gray matter and added some thoughts I had not mentioned here previously.  From my The Corner post:

Sarah Palin’s “death panel” charge clearly continues to spook the Obama administration — even though, as I said here, the end-of-life-counseling rule did not technically qualify for that pejorative. But I think more may be at work than Palin-phobia. The general unpopularity of Obamacare has united conservatives and independents into a potential new political coalition that threatens to be the iceberg to the Obama administration’s Titanic. With repeal to be the first order of business for the House of Representatives, and a war of attrition likely to result against it when the Senate refuses to go along, it seems that the administration is trying to make Obamacare and its ancillary parts as small a target as possible. This is a sign of political weakness that should encourage repealers to keep pushing.

First the repeal vote to set up the issue, and then the dismantling brick-by-brick.  Oh, and we already see some weakening by a Democratic Senator.  From the story:

A Democratic senator facing a tough reelection fight in 2012 said Congress should pursue alternatives to a requirement for individuals to purchase health insurance. More than 20 states have challenged the new healthcare reform law’s so-called individual mandate in federal court, arguing that Congress cannot require individuals to purchase health coverage. Sen. Claire McCaskill (D-Mo.), expected to face stiff competition from Republicans in the 2012 election, said she understood why the requirement was included in the reform law, but said lawmakers should find other ways to boost insurance enrollment.

Believe me, if Obamacare was popular, she wouldn’t be hedging her bets.
0
Print
Email
Prev Article
Next Article