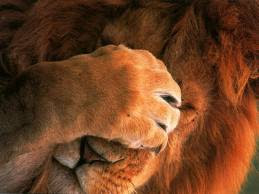 A restaurant in Tucson is planning to serve tacos containing lion meat.  From the story:

In the six months since it launched Exotic Taco Wednesdays, Boca Tacos y Tequila has served up python, alligator, elk, kangaroo and rattlesnake. Frog legs, turtle, duck and Rocky Mountain oysters have also made appearances. “We’ve done just about anything we can get our hands on,” said owner Bryan Mazon. “Every Wednesday we do something a little bit different.” Last week he announced on Boca’s Facebook page that the UA-area taco shop was accepting prepaid orders for African lion, to be served on Feb. 16. Orders must be placed by 3 p.m. Feb. 7. “I’ve gotten a lot of questions, like if it’s legal,” said Mazon, adding that a few lion tacos have been reserved so far. “We’re still a month out, too.”

According to the Food and Drug Administration, lion and other game meat can be sold as long as the species isn’t endangered.

Prediction: Now that the cat is out of the bag (good one, Wesley!), it will never happen.  Animal lovers will go into high shriek mode.  The restaurant will back down.

Which raises a question in my mind.  With the exception of fish and a few reptiles, why is it that we don’t generally consume predator animals? True, some Asian countries eat dog.  And then there was the bear Davey Crockett killed “when he was only three,” from the old Disney song.  (Boy, am I dating myself!).  In the frozen north they eat walrus and whale.  But certainly, eating predators is the exception for humans.  Of course, there are fewer of them and, particularly in our past, less technological epochs, they would be far more difficult to kill—they bite back!  Perhaps it’s just predators—us—having developed a taste over the millennia for herbivores such as ox, horse, and goat and their domesticated derivatives.

Today, when we are no longer in raw survival mode, we have become more picky.  Assuming humane slaughter, I don’t see a difference between eating a lion and a cow.  But so much of our sensibilities about animals today runs on pure emotion—and we perceive lions as so majestic!  Like I said, I think this story will create a firestorm of protest.  I doubt that the lion tacos will make it to the menu.
0
Print
Email
Prev Article
Next Article