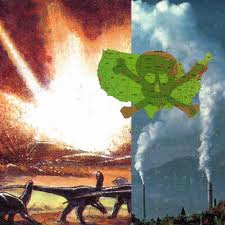 Environmentalism has taken on a distinctly anti human hue in recent years—which is why I got interested in discussing it here.  Latest example: We are supposedly calling a mass extinction event.  From the story:

Mankind may have unleashed the sixth known mass extinction in Earth’s history, according to a paper released by the science journal Nature. Over the past 540 million years, five mega-wipeouts of species have occurred through naturally-induced events. But the new threat is man-made, inflicted by habitation loss, over-hunting, over-fishing, the spread of germs and viruses and introduced species, and by climate change caused by fossil-fuel greenhouse gases, says the study. Evidence from fossils suggests that in the “Big Five” extinctions, at least 75 percent of all animal species were destroyed.

Unless we have a nuclear war, I truly doubt we will cause 75% of the species on earth to disappear.

But here’s the point that I would like all you human unexceptionalists out there—and you know who you are—to ponder:  If we do cause a mass extinction and we thrive anyway—so what? What difference does it make if we kill off species if they don’t do us any material good?  It just means more earth for us.


You could say that such extinction would cause an environmental imbalance.  True, but the earth will be fine in the long run.  New life will emerge from the ashes—as it has 5 times before.  Indeed, it could open a path for tremendous evolutionary events!

You could say that it would harm humanity, that we depend on a diverse ecosystem.  True. But that means what impacts us is what matters most, at least implying human exceptionalism.  Ooops.

You could say we will have destroyed something of undefinable beauty and infinite preciousness.  True!  But that isn’t rational.  Beauty, awe, propriety, probity, humility, respect—these are mere moralistic sensibilities—and I have been hearing in another thread that such considerations can’t be measured and thus, aren’t legitimately imposed upon a libertarian society.

So, what is your answer to the question posed above?  Mine is human exceptionalism.  Our mere humanity imposes the human duty upon us to be good conservators of nature.  Causing a mass extinction would be to violate one of our raisons d’ etre-whether we evolved randomly, were designed, or are the product of divine creation.  Living properly on the earth is a profoundly moral issue that can’t be rationally measured but arises from the intrinsic nature of our species.  Indeed, if being human alone doesn’t give rise to that duty, what does?

And if being human does give us that duty—name one other creature that has a responsibility to sometimes put its own thriving aside to protect other species.  Can’t think of one?  Me neither.  That makes us exceptional.
0
Print
Email
Prev Article
Next Article