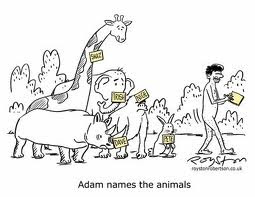 PETA never runs out of ideas to promote it’s a rat, is a pig, is a dog, is a boy, agenda. Now, it wants the publishers of a new translation of the Bible to personalize animals.  From the story:

Animal activists say the Bible needs to be more considerate of God’s furry friends. People for the Ethical Treatment of Animals, or PETA, has asked the Committee on Bible Translation to update the New International Version Bible to include more animal-friendly language, according to CNN. In a letter to translators, the group called the Bible’s current text “speciesist” and requested that pronouns like “he” and “she” be used instead of “it” when referring to animals. “The public now recognizes that animals are feeling, intelligent individuals, capable of joy and suffering,” PETA Vice President Bruce Friedrich wrote in the letter...PETA said it hopes the switch to include more gender-neutral language will spark translators to readdress the ways animals are referred to in the Bible. Supporters for the change argue that referring to an animal as “it” takes away its special, God-given identity. “Language matters,” Friedrich told CNN. “Calling an animal ‘it’ denies them something. They are beloved by God. They glorify God.”

Oh bruuuuther.  PETA never misses a chance for publicity or to blur the crucial moral distinction between humans and animals.

The letter requests that animals be referred to as “who,” instead of “which,” just as people are.  But of course, this seeks to promote PETA’s goal of eradicating the moral boundaries between the moral worth of people and that of animals.

The Bible—whether one believes in it or not—is about the relationship between humans and God, not between God and animals.  Indeed, in the Bible, humans are given dominion over the animals, God established animal sacrifice, abandoned by Christians (and eventually by Jews after the destruction of the Temple).  Moreover Jesus explicitly states that humans have greater value than animals—denied by PETA’s animal rights ideology. He rode into Jerusalem on Palm Sunday on a colt—an action deemed abuse by PETA.  Indeed, Jesus was an orthodox Jew, and thus His Last Supper—the Passover feast—was lamb.

I doubt that PETA will accept those—and the many other human exceptionalist parts of scripture—as having any sway.  The committee should similarly ignore PETA’s suggested rewrite to remake the faith in PETA’s misanthropic image.
0
Print
Email
Prev Article
Next Article