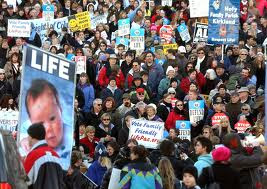 It is amazing that activists in the pro life movement don’t get thoroughly dejected: They are scorned by the mainstream media.  Their free speech rights are abridged in ways that would never be permitted of labor unions. They are looked down upon by celebrity culture and made fun of by famous comedians.  Their leaders are demonized and their grass roots are dismissed as so many religious fanatics.  And even when they prevail legislatively, they are stymied repeatedly in the courts.

And yet, they are ever so slowly succeeding. A peer reviewed scholarly article just published in the State Politics and Policy Quarterly has found that pro life inspired state laws have unquestionably contributed to the recent decline in the number of abortions.  From the article:

The number of abortions that were performed consistently increased throughout the 1970s and the 1980s (Brener et al. 2002). However, between 1990 and 2005, the number of legal abortions declined by 22.22 percent (Gamble et al. 2008; Koonin, Smith, and Ramick 1993). A number of different reasons for this decline are possible. However, one factor that played a role was the increased amount of anti-abortion legislation that was passed at the state level.  Indeed, the Supreme Court’s decisions in both Webster and Casey and the electoral success of anti-abortion candidates at the state level resulted in a substantial increase in the number of restrictions on abortion.

By 2005, more states had adopted parental involvement laws and informed consent requirements (NARAL 1992, 2005). A comprehensive series of regressions provides evidence that these laws are correlated with declines in in-state abortion rates and ratios. Furthermore, a series of natural experiments provides even more evidence about the effects of these restrictions on abortion. States where judges nullified anti-abortion legislation were compared to states where anti-abortion legislation went into effect.

The results indicate that enforced laws result in significantly larger in-state  abortion declines than nullified laws. Other regression results indicated that various types of legislation had disparate and predictable effects on different subsets of the population. For instance, parental involvement laws have a large effect on the abortion rate for minors and virtually no effect on the abortion rate for adults. These results provide further evidence that anti-abortion legislation results in declines in the number of abortions that take place within the boundaries of a given state.

That’s the beauty of the American system.  People can have their cause knocked to its knees—as in Roe v. Wade—and through creativity, commitment, and doggedness materially impact the society’s laws and the attitudes of the public, despite it all.

More remarkable still, pro life groups do not have very deep pockets.  Much of this was accomplished by people staying up late at night making phone calls and licking stamps.  Whatever one’s position on abortion, there can be no denying that the pro life movement has been a remarkable political success.
0
Print
Email
Prev Article
Next Article