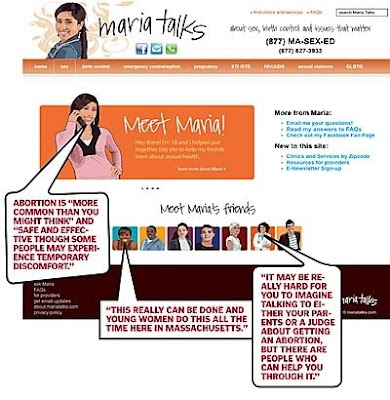 The state of MA is helping fund a site that undermines parental relationships by smilingly telling teenagers that they can get an abortion—presented as no big deal—and keep it all a secret from their parents.  From the story:

A state-funded sex education Web site that tells teens an abortion is “much easier than it sounds” has drawn fire from outraged pro-lifers who say mariatalks.com is glossing over ugly truths, steering teens toward the controversial procedure and counseling them how to keep mom and dad in the dark. “The commonwealth is using taxpayer money to tell kids how to get a secret abortion, and that’s wrong,” said Linda Thayer, a former Boston schoolteacher who is vice president for educational affairs of Massachusetts Citizens for Life, which this week took aim at the site. “This is a misuse of state funds, especially for parents who are taxpayers,” said Thayer, who also blasted the Web site for “deception by omission” for describing abortion simply as “when the contents of the womb (uterus) are removed.”

Mariatalks.com, featuring fictional hip teen “Maria,” who addresses teens in a breezy tone, has been produced since 2008 by the AIDS Action Committee with $100,000 annual grants from the state Department of Public Health. The money also covers a sex-crisis hotline and other outreach efforts. AIDS Action Committee chief Rebecca Haag, in a statement defending the Web site, said, “We feel strongly that the issues that are addressed through the Maria Talks Web site are essential in safeguarding the general, sexual health of youth by informing them of their risk for unintended pregnancies, HIV and other sexually transmitted infections.”

Maria tells teen readers abortion is a “hot topic” but that the procedure is “more common than you might think” and “safe and effective, though some people may experience temporary discomfort.” The site’s discussion of risk is limited to advising that it is better to get an abortion sooner rather than later...

Under state law, children under 18 seeking an abortion must have permission from a parent or a guardian. Maria notes that state law allows minors to skirt that approval through a confidential judicial hearing, saying, “I know it sounds crazy . . . this really can be done and young women do this all the time here in Massachusetts.” The site then directs teens to Planned Parenthood, saying that agency will either help them talk to parents or provide a lawyer to guide them through the judicial process.

Whatever one thinks about its legality, abortion is a serious matter.  It has a profoundly moral element, as it destroys a developing human life.  Contrary to “Maria’s smiling advice,” it can have a devastating emotional impact on girls and women who undergo it. And, it is a form of surgery that occasionally leads to serious complications, even death.  If the child bleeds or has other complications and the parents don’t know why, needed medical interventions might not be obtained.

The site has a free speech right to exist, of course.  But the state should not contribute to a the clear social agenda of pushing parents out of the lives of their children on sexual, medical, and mental health matters.  It’s wrong.

What’s important is how you feel about it. One of my friends who had an abortion told me that it was a difficult decision to make, but she felt that it was the best choice she could make for herself, her boyfriend, her family, and her future.

As far as I could tell, no equivalent friend told Maria that giving up the child for adoption, or keeping the child, was “best.”  Besides, telling teenagers to follow their feelings is fraught with peril.  Sometimes what one feels is right in the moment, is very wrong.

Second, while the site does discuss adoption, it has a link to its abortion page.  In contrast, the abortion page does not have a link to the adoption page.
0
Print
Email
Prev Article
Next Article