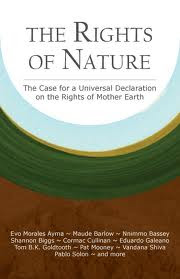 Utter madness: First, under the influence of American radical environmentalists, Ecuador put the “rights of  nature” into its constitution, co-equal with those of humans.  I missed this, but apparently a few months ago, Bolivia did likewise.  And now, an attempt will be made to have the UN adopt the radical idea that “nature” can have “rights.”  From the story:

Bolivia is drawing up a draft UN treaty which would give Mother Earth the same rights as humans, including the right to life, to pure water and clean air. The South American country wants the UN to recognize the Earth as a living entity that humans have sought to ‘dominate and exploit’. It aims to establish 11 new rights for nature which include: the right to life and to exist; the right to continue vital cycles and processes free from human alteration; the right to pure water and clean air; the right to balance; the right not to be polluted; and the right to not have cellular structure modified or genetically altered. Bolivia’s large indigenous population is ruled by Latin America’s first indigenous president Evo Morales, who was elected in 2006. Morales is an outspoken critic in the UN of countries which are not prepared to limit climate change by holding temperatures to a 1C rise. Bolivia’s ambassador to the UN, Pablo Salon, says his country seeks to achieve harmony with nature, and hinted that mining and other companies would come under greater scrutiny.

I can think of fewer ways to subvert human exceptionalism and destroy human prosperity than to give “nature” co-equal “rights” with humans.  And remember, possessing rights implies personhood.  So as the story said, this is about personalizing nature and the earth.

Here’s part of what I said in the Weekly Standard about Ecuador’s granting constitutional rights to nature.  From “Why We Call Them Human Rights:”

This goes way beyond establishing strict environmental protections as a human duty. It is a self-demotion of humankind to merely one among the billions of life forms on earth—no more worthy of protection than any other aspect of the natural world. Viruses are part of nature. So, too, are bacteria, insects, trees, weeds, and snails. These and the rest of Ecuador’s flora and fauna all now have the constitutional and legally enforceable right to exist, persist, and regenerate their vital cycles.

The potential harm to human welfare seems virtually unlimited. Take, for example, a farmer who wishes to drain a swamp to create more tillable land to better support his family. Now, the swamp has equal rights with the farmer, as do the mosquitoes, snakes, pond scum, rats, spiders, trees, and fish that reside therein. And since draining the swamp would unquestionably destroy “nature” and prevent it from “existing” and “persisting,” one can conceive of the farmer—or miners, loggers, fishermen, and other users and developers of natural resources—being not only prevented from earning his livelihood, but perhaps even charged with oppressing nature.

And, by obliterating human exceptionalism, we will also destroy the basis of human rights:

When I mention the “rights of nature” in speeches, people still laugh and roll their eyes.  It’s time for such, “Oh, that will never happen,” kind of thinking to stop.  These advocates are very serious in what they want to do.  And it will cause tremendous human detriment if they succeed.
0
Print
Email
Prev Article
Next Article