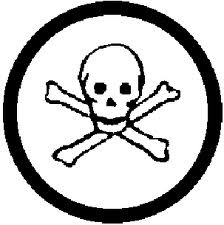 A woman tried to commit suicide with rat poison late in pregnancy.  She survived, but her baby died after birth.  From the story:

Bei Bei Shuai, 34, a restaurant owner who moved to the US from China 10 years ago, was pregnant and planning to marry her boyfriend until she learned late last year that he was already married and he would be abandoning her. A few days later, on 23 December, she went to a hardware store, bought rat poison pellets, went back to her flat in Indianapolis and swallowed some. But she did not die immediately and was persuaded by friends to go to hospital. She was given treatment to counteract the poison and gave birth on New Year’s Eve, but her daughter, Angel, suffered seizures and died after four days.

Shuai then had a second breakdown and spent a month in a psychiatric ward, after which she left to stay with friends and began rebuilding her life. But in March she was arrested and charged with murder and attempted foeticide. She now faces life imprisonment. “This case has huge implications for pregnant women, not only in Indiana but across the country,” said Alexa Kolbi-Molinas, a lawyer with the American Civil Liberties Union. “If we allowed the state to put a woman in jail for anything that could pose a risk to her pregnancy, there would be nothing to stop the police putting in jail a woman who has a drink of wine or who smokes. So where do you draw the line?”

Please.  Rat poison isn’t a glass of wine or a cigarette.  Beyond which, the state has a duty to protect children, and this was a born baby. If there was a direct relationship with the poison and the baby’s death or injury, it seems to me to be a righteous prosecution (with a lot of potential defenses based on mental health and cause and effect).

Mothers have been prosecuted for harming or killing their children when they engaged in recklessly dangerous behavior while pregnant, such as taking illegal drugs.  But again, this is for harm caused to the born child as a consequence of that behavior.  Some think that violates women’s rights.  But I think it protects the welfare of children.

But what if she had miscarried from the poison instead of giving birth and then the child dying?  Would a prosecution be allowed?  I doubt it.  Mothers are allowed to terminate their pregnancies at will, in some states through the ninth month.  Wouldn’t this merely be a self induced abortion?  Or to put it another way, if an abortionist did the deed it isn’t a crime, but if she did it to herself, it is?

Now, if someone else gave her the poison, and she miscarried, I don’t think there is a question that it would be a prosecutable offense, indeed,  in some states, as a murder.  Such are the morally inconsistent and convoluted times in which we live.
0
Print
Email
Prev Article
Next Article