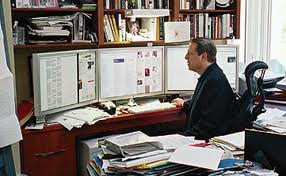 Ouch.  A notable political scientist (and believer in global warming, at least in the general sense) has mounted a powerful critique of the disastrous political  leadership on the issue by Al Gore.  From “The Failure of Gore, Part 1” by Walter Russell Mead in his blog at The American Interest:

Gore has the Midas touch in reverse; objects of great value (Nobel prizes, Oscars) turn dull and leaden at his touch.  Few celebrity cause leaders have had more or better publicity than Gore has had for his climate advocacy.  Hailed by the world press, lionized by the entertainment community and the Global Assemblage of the Great and the Good as incarnated in the Nobel Peace Prize committee, he has nevertheless seen the movement he led flounder from one inglorious defeat to the next.  The most recent, failed global climate meeting passed almost unnoticed last week in Bonn; the world has turned its eyes away from the expiring anguish of the Copenhagen agenda.

The state of the global green movement is shambolic.  The Kyoto Protocol is withering on the vine; it will almost certainly die with no successor in place.  There is no chance of cap and trade legislation in the US under Obama, and even the EPA’s regulatory authority over carbon dioxide is under threat.  Brazil is debating a forestry law that critics charge will open the floodgates to a new round of deforestation in the Amazon.  China is taking the green lobby head on, suspending a multibillion dollar Airbus order to protest EU carbon cutting plans...It is hard to think of any recent failure in international politics this comprehensive, this swift, this humiliating.

Mead gets specific as to how the shaman of GWH went wrong:

Let us begin with a basic question of judgment.  The former vice president has failed to grasp the basic nature of the kind of leadership the global green cause requires.  Vice President Gore, like all who aspire to lead great causes, must reconcile his advocacy with his conduct — that is, he must conduct himself in a way that is consistent with the great cause he seeks to promote...You can be a leading environmentalist and fail to pay all of your taxes.  You can be a leading environmentalist and be unkind to your aged mother...

But you cannot be a leading environmentalist who hopes to lead the general public into a long and difficult struggle for sacrifice and fundamental change if your own conduct is so flagrantly inconsistent with the green gospel you profess.  If the heart of your message is that the peril of climate change is so imminent and so overwhelming that the entire political and social system of the world must change, now, you cannot fly on private jets.  You cannot own multiple mansions.  You cannot even become enormously rich investing in companies that will profit if the policies you advocate are put into place.

Add in Gore’s refusal to debate, refusal to answer questions in a free and open forum, and one comes to the conclusion that he doesn’t believe his own dire warnings.  I mean, if you really think the world is going to end, would that be how you acted?

Back to Mead in a point I hadn’t considered before:

Worse, by hanging out with the glitterati and identifying himself so clearly with the elite against the Great Unwashed, Gore does irreparable harm to the cause he seeks to lead.   The Achilles heel of environmentalism in politics has always been its association with upper crust ‘starve the peasants to save the pheasants’ thinking.  Gore’s lifestyle and the way he positions the issue strengthen that fatal association rather than undermining it.  The more the rich and the well bred applaud his heroism and swoon over his courage, the more sullen and resistant the peasants grow...

If Al Gore really wants to understand why the global green movement has tanked, he should start by taking a long hard look in the mirror.  Gaia, too, can be betrayed by a kiss.

Oh, I wish I had written that kicker!  The whole essay is worth reading regardless of your position on the issue.  It is cogent, articulate, very well written—and spot on right.
0
Print
Email
Prev Article
Next Article