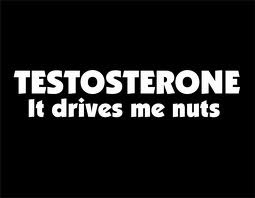 To think some people take this guy seriously.  Chris Mooney has a Looney Tunes blog post out today blaming testosterone and the supposed need to dominate others for global warming skepticism among angry white male conservatives.  (Talk about cliched thinking!)

It’s a real hoot.  He discusses another one of those ridiculous, “why conservatives think the way they do” articles soon to be published, and weighs in with a theory of his own for higher levels of global warming skepticism among the world’s Rush Limbaughs.  From “What’s With Conservative White Men and Climate Change Denial?”

I am surprised the authors didn’t bring up what may be the most biologically grounded of them: “social dominance orientation,” or SDO. This refers to a particular personality type—usually male and right wing—who wants to dominate others, who sees the world as a harsh place (metaphorically, a “jungle”) where it’s either eat or be eaten, and who tends to really believe in a Machiavellian way of things. Fundamentally, this identity is all about testosterone firing and being an alpha male. SDOs are fine with inequality and in favor of hierarchy because frankly, they think some people (e.g., them) are just better than others, and therefore destined to get ahead.

Or, perhaps they are just not easily panicked by blatant hysteria the way myopic, metrosexual, testosterone deficient, left wing, cracking voiced, white male “science” pundits are.  I mean, if we are going to cast baseless aspersions via stereotyped, insulting, and unscientific “theories,” why can’t I join in on the fun?
0
Print
Email
Prev Article
Next Article