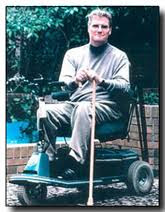 I met my wonderful friend, Mark Pickup, in Vancouver way back in November 1997 at an anti euthanasia conference where we were both speaking.  Ah, we were young!  Over the years we have become closer than brothers, to the point that I dedicated my book Consumer’s Guide to a Brave New World to Mark.

Mark is an uncompromising opponent of euthanasia.  And he is a disability rights activist.  He is also a Christian apologist, a convert to Catholicism.  Often, pro euthanasia types use his religious faith as a deflector against his cogent and powerful rational opposition to legalizing assisted suicide and euthanasia.  That is a clever tactic in a country like Canada which is decidedly post Christian, if not anti.  But it seems to me that with an issue literally involving life and death, it is incumbent on those who wish to install this radical agenda into law to answer Mark’s substantive and rational non religious objections.

Mark pointedly made the anti assisted suicide case in a recent conference call at the request of the Canadian Department of Justice, the contents of which he has published on his blog.  The whole thing is well worth everyone’s time.  But here are a few highlights.

First, he confronts head on a  potential conflict between liberty interests in Canadian law.  From “My Input to Government Regarding a Legal Challente to Canada’s Laws Against Assisted Suicide:”

My citizenship rights entitle me (and other Canadians with disabilities) to equal protections of the law. The first Legal Right mentioned in the Canadian Charter of Rights and Freedoms (as well as Article 3 of the United Nation’s Universal Declaration of Human Rights) is the Right to Life. There is no mention of a Right to Death. Human rights must protect life not death. Death does not need protecting; it is an eventuality that will visit everyone regardless of what any law might state.
Canada’s Charter does mention in Section 7 the right not to be deprived of security of the person but it is qualified and not sufficient to override laws on euthanasia or assisted suicide. Why? Because by doing so it will jeopardize “principles of fundamental justice” for present and future vulnerable populations.

Exactly. When you say that some lives are so devoid of quality that rather than try to prevent suicide, the state will allow it to be facilitated, a powerful and deleterious social statement has been made about the worth of those lives stripped of protection. Mark explains:

Acceptance of assisted suicide places personal autonomy as paramount. This must be rejected. Autonomy is diametrically opposed to the concept of community. As John Donne stated in the 17th Century, “No man is an island entire unto itself”.  If I choose assisted suicide it will not affect just me: It will affect my wife, children and grandchildren. It will affect my community by not teaching the importance of inclusion and accommodation of people with terminal, chronic illnesses or severe disabilities. It will affect my physician because I will ask her to cease being a healer and become my executioner or participate in killing me. And in a small but certain way, my assisted suicide would help to coarsen the collective public conscience and further entrench the notion that there is such a thing as lives unworthy of life ? so unworthy that society will end or help to end those lives.
Assisted suicide threatens to turn back the clock of inclusion that disability advocates and their allies fought so hard to gain throughout many decades. Assisted suicide is a cheap and short-sighted compassion that ends in the ultimate exclusion of the tomb.

This is precisely why the disability rights community—people who, unlike Mark, are generally liberal politically, pro choice on abortion, and secular in outlook—are among the most vociferous opponents of legalizing doctor prescribed death.

Mark criticizes the constant use of euphemisms in assisted suicide advocacy.  And notes that almost all pain can be alleviated (which is why assisted suicide advocates deploy a very elastic definition of unbearable suffering as being whatever the suicidal person thinks is unbearable).  He notes the problems with “who decides” about when a “quality of life” isn’t worth living, noting:

People advocate euthanasia or assisted suicide when quality of life has been deemed to be too low. Whose standard will judge? The treating physician? The family of the sick person? The patient? Euthanasia/assisted suicide advocates usually say the patient decides. The problem is this: Quality of life is a moving target. What gave my life quality at 25 years of age is not what gives my life quality at 58 years of age. At what point do we stop the continuum for quality of life. At 25 years my quality of life revolved around being athletic and physically active with my family and enjoying an upwardly mobile career. After I was diagnosed (at the age of thirty) those things either stopped or were severely hampered.
In my grief, I did not understand that a time would come when love (not physical function) would define my standard for quality of life. In my early thirties, the joy of having grandchildren did not even cross my mind and yet today they are my joie de vivre! Some arbitrary cut-off point for quality of life would have stopped that joy before it was.

My friend Bob Salamanca, who died of ALS, said the same thing.  He was suicidal for 2 1/2 years after his diagnosis.  He noted that assisted suicide advocates would have been all too happy to accomodate his desire to die, and congratulate themselves for giving him access to “death with dignity.”  But that would have deprived Bob of what he called the best years of his life—but no one would have ever known because by helping kill him, they would have taken away all choice and all hope.

Mark concludes by noting that quality of life is already an excuse to deny wanted life-sustaining medical treatment.  And he worries in conclusion:

Euthanasia or assisted suicide can be so attractive and easy. It is a cheap compassion that requires so little humanity from those who administer or prescribe it. Certain lives will ultimately be deemed as unworthy of life and ended with or without their consent. Guess who they will be? Moi, et les gens comme moi.

That is precisely what has happened in the Netherlands and Belgium.  Indeed, once killing is accepted as an acceptable answer to human suffering, it eventually subsumes “choice.”  We ignore Mark’s pointed warning at our peril.
0
Print
Email
Prev Article
Next Article