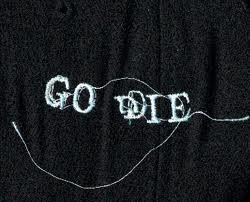 “Get out of the lifeboat you expensive terminal cancer patients!  Sure, your lives could be extended months, maybe even years,—but it isn’t worth the money!  You’re going to die sooner or later, so it might as well be sooner.  We need the money for more important and productive patients.”

That, in a harshly stated nutshell, is the recommendation of a committee of doctors in Lancet Oncology who recommend money by rationing therapies that don’t save the lives of cancer patients, but can extend their lives.  From the Daily Mail story:

Patients with terminal cancer should not be given life-extending drugs, doctors said yesterday. The treatments give false hope and are too costly for the public purse, they warned. The group of 37 cancer experts, including British specialist Karol Sikora, claimed a ‘culture of excess’ had led doctors to ‘overtreat, overdiagnose and overpromise’...’We clearly would want to spare the patient the toxicity and false hope associated with such treatment, as well as the expense,’ the experts told the European multidisciplinary cancer congress in Stockholm.The doctors point out that many patients do not want to spend their final days undergoing exhausting chemotherapy in hospital and would rather be at home surrounded by loved ones.

Oh, quit pretending that it’s for the patient. It’s about money.

Indeed, we are now seeing a drive to extend the cancer of Futile Care Theory beyond ICU-style life-sustaining treatment, to other forms of care in which the patient may not even be hospitalized.  When I was researching Culture of Death, I interviewed an advocate of medical futility and noted that refusing ICU treatment wouldn’t save a lot of money.  I asked, what will futilitarians try to cut next?  He responded, “marginally beneficial care.” And here we are.

Don’t get me wrong. I support people deciding not to go for the last shot of chemo, with the terrible side effects that can bring.  But the decision should not be up to the doctors to withhold what is, after all, efficacious treatment that extends life.  Doctors should give clear and honest pros and cons of the treatment—including onerous physical effects—but it should be up to the patient to decide whether the time has come to enter a hospice situation.

Patient advocates are pushing back:

But a spokesman for the Rarer Cancers Foundation said: ‘Describing all treatments near the end of life as futile is tantamount to writing patients off. ‘Just because they cannot be “cured” does not mean that we cannot give them valuable treatment, care and support.’ Ian Beaumont of Bowel Cancer UK said money was not the sole issue. ‘While cancer care can be expensive, it is unjust to  put a cost on the lives of patients, especially when modern treatments can often give them precious time with their loved ones and increase their length and quality of life,’ he added. Only last week a pill for prostate cancer, Abiraterone, was made available in the UK for the first time at a cost of £35,000 a patient. Although on average it only extends lives by a few weeks, some patients survive for five years.

We all have our stories.  When my dad was dying of colon cancer—for which he generally received awful care (I now know) from the Veterans’ Administration—doctors very reluctantly offered him a last ditch chemo that might give him a few months, with terrible side effects.  He took it, and the cancer actually went into remission for a year. Not only that, the side effects were few. Indeed, it was a time of relative health for my dad, in which he and mom traveled and he thoroughly enjoyed every minute.

Bottom line: By accepting the philosophical premises of Futile Care Theory, bioethicists have opened the door to now imposing greater restrictions in the name of “fairness.”  We should not let utilitarian central planners to take away hope and create a putative “duty to die.”
0
Print
Email
Prev Article
Next Article