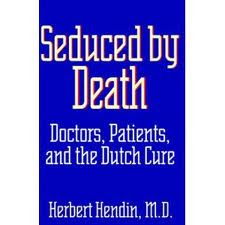 I have been fighting the international campaign to legalize and normalize doctor-prescribed/administered death since 1993, and this much I know: Once euthanasia is let in the door, ultimately, enough is never, ever enough.

Par exemple: Euthanasia activists often assure that no doctor will be forced to participate in medicalized killing.  But I have been warning that this right of conscience is really an expedient, intended to give false assurance while the euthanasia consciousness gestates and matures.

And now the very pro euthanasia Dutch Medical Association (KNMG) has stated that all doctors have a professional duty to be complicit in euthanasia—either by killing legally qualified patients directly who ask, or if they don’t want to do the deed personally, by referring suicidal patients to a death doctor who they know will kill.  From “The Role of the Physician in the Voluntary Termination of Life” position paper:

Patients, too, often have difficulty telling a physician they have an authentic wish to die. Physicians, for their part, are under an obligation to take such requests seriously. This also means that if a physician cannot or does not wish to honour a patient’s request for euthanasia or assisted suicide he must give the patient a timely and clear explanation of why, and furthermore must then refer or transfer the patient to another physician in good time. Vague promises,  failure to transfer patients during absences, causing delays or indicating at a late stage or too late that the physician has reconsidered his decision to perform the euthanasia all demonstrate a lack of professionalism. The KNMG therefore calls on all physicians to act as they would wish themselves or their loved ones to be treated.

Do the Dutch really want doctors to have to choose between their careers and being complicit in killing?  Are doctors to be punished professionally because they still believe in the Hippocratic Oath?  Because while that is not yet Dutch law, by asserting that Dutch doctors have a “moral and professional duty” to refer, forced complicity is precisely where this is heading.   Dissenting Dutch doctors need to forcefully stand against this encroaching tyranny.

It is also worth noting that if a patient does not qualify for euthanasia, according to the KMNG position paper, a doctor may refer him/her to how-to-commit-suicide literature:

There is no punishment for physicians and other persons if they provide information about suicide. Physicians are also legally permitted to refer patients to information that is available on the Internet or to publications sold by book vendors, or provide these on loan, and to discuss this information with patients. (30, 31) In fact, it is the physician’s professional responsibility to engage the patient in discussion if the latter voices an intention to stockpile drugs with a view to using them to end his life. The physician can, but is not obligated to, refer the patient to available resources and experts, including spiritual care providers such as a pastor, minister or humanistic counsellor.

So, let’s recap: It is unprofessional for a doctor to refuse to kill or refer for that purpose when a patient asks for euthanasia.  But it is okay to help patients learn how to commit suicide if they don’t qualify for euthanasia under the  law. Culture of death, Wesley?  What culture of death?

And the moral of the story?  Once the culture of death sinks into the bedrock of a society or culture, it brooks no dissent.
0
Print
Email
Prev Article
Next Article