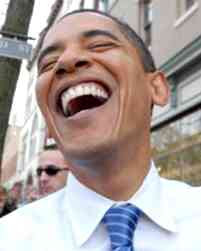 No wonder the president is smiling: The Fourth Circuit Court of Appeals has dismissed two Obamacare appeals, one from Virginia and one from Liberty University.  But neither reached the constitutional question, dismissing the cases for a purported lack of standing to bring the cases.  From the Politico story:

A federal appeals court on Thursday threw out two challenges to President Barack Obama’s health care overhaul on procedural grounds. Delivering a two-pronged win to the Obama administration, the 4th Circuit Court of Appeals said Virginia has no right to challenge the law’s requirement that nearly all Americans buy insurance. The court also said that Liberty University couldn’t challenge the law before the mandate goes into effect...

The court said Virginia had no right to bring its lawsuit because “the sole provision challenged here — the individual mandate — imposes no obligations” on the state itself. In the case of Liberty University, the court said the legal challenge had come too soon: “Because this suit constitutes a pre-enforcement action seeking to restrain the assessment of a tax, the Anti-Injunction Act strips us of jurisdiction. Accordingly, we must vacate the judgment of the district court and remand the case with instructions to dismiss for lack of jurisdiction.”

Much is being made that the decision was made by three Democratic appointees, two by Obama.  On the other hand, the proper judicial approach is to avoid the constitutional question when possible.  In this regard, I think the Liberty case was rightly decided.  However, I have strong doubts about the dismissal of the Virginia case since state law conflicts directly with Obamacare’s mandate, and the commonwealth must act to facilitate the insurance exchanges (or the Feds can impose its own version).

I would have preferred a substantive finding of unconstitutionality, but this beats the opposite. And it really doesn’t matter.  Two District Courts of Appeal have previously come to opposite conclusions about the constitutionality of the individual mandate, and VA can always decide to become a party to the case brought by 26 other states that struck down the mandate.    This conflict between districts guarantees a Supreme Court final decision, perhaps before the election next year.  And since these cases added no analyses to the constitutional question, they will have no material effect on the ultimate outcome.