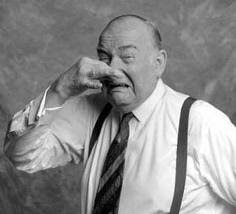 I don’t think the current growth in people without health insurance is directly attributable to Obamacare, but primarily to the lousy economy.  Much of the law hasn’t taken effect yet, and the more than 1000 waivers from existing Obamacare mandates have prevented many from losing their coverage.  Still, this isn’t a good sign.  From a CMS report of a Gallup Poll:

My intro notwithstanding, I do think that the potentially onerous requirements of Obamacare, and the uncertainty created by such a huge mandate, have helped depress employment, or at least, made employers think twice before bringing on new hires.  Moreover, a recent study shows that up to 30% of companies currently insuring their workers might strip them of coverage and throw them into the exchanges after the law takes full effect.  From the AP story:

Nearly one of every 10 midsized or big employers expects to stop offering health coverage to workers after insurance exchanges begin operating in 2014 as part of President Barack Obama’s health care overhaul, according to a survey by a major benefits consultant. Towers Watson also found in its July survey that another one in five companies are unsure about what they will do after 2014. Another big benefits consultant, Mercer, found in a June survey of large and smaller employers that 8 percent are either “likely” or “very likely” to end health benefits after the exchanges start. The surveys, which involved more than 1,200 companies, suggest that some businesses feel they will be better off dropping health insurance coverage once the exchanges start, even though they could face fines and tax headaches. The percentage of companies that are already saying they expect to do this surprised some experts, and if they follow through, it could start a trend that chips away at employer-sponsored health coverage, a long-standing pillar of the nation’s health system.

Obamacare is hurting, not helping, our society overall.  And I think it will only get worse if the law ever goes into full effect.  Perhaps that’s why nearly 60% still want repeal according to a recent Rasmussen Poll.
0
Print
Email
Prev Article
Next Article