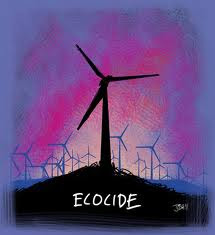 The campaign to create a new “international crime against peace” called “ecocide,” which would land offenders, such as oil and timber company CEOs, in the Hague, continues to advance.  By making “ecocide” an international crime akin to genocide cleansing—and as I have noted in the Weekly Standard, not just pollution but also large scale development—the radical environmentalists aim to stifle most development of resources by making it a crime to engage in wealth producing activities such as mining, oil and gas drilling, timber harvesting, perhaps even suburbanization.

Moreover, the movement is profoundly anti human exceptionalist because it uses the term “displaced individuals” in the definition of the crime to include flora and fauna, which are deemed as important as people. In this sense, ecocide is the sword to “rights of nature” being the shield.  If enacted, poverty will flow like a river.

When I mention this environmental misanthropic threat in speeches—as so often happens about many of the radical policies that this way come—people often roll their eyes with that “it can’t happen here” look on their faces.  Well it will happen here if we aren’t careful.  Indeed, ecocide advocates are about to run a mock trial streamed live on Sky News in the UK.  From the New Zealand Standard story:

Michael Mansfield QC (prosecuting barrister) and Nigel Lickley QC (defence barrister) will lead the case for and against Mr X. Mr X has been charged with a number of ecocides – which one will be tried will be determined on the day – and could be:

The trial will examine how the crime of Ecocide protects the Earth Right to Life.

Note again, the defendants will not necessarily be accused of polluting—as in the Exxon Valdez oil spill sense—but development.  And as the painting I embedded above illustrates, once the premise is accepted, it won’t end with the currently named enemies.

Make no mistake: This is the future these environmentalist radicals want; shrinking economies, reducing levels of wealth, fewer jobs, shorter and more brutal human lives, and equal rights for fauna, flora, dirt, viruses, and rocks.  It is utterly anti human.


Polly Higgens, the Gaia-mother of the Ecocide Movement believes she can attain her goal within two years.  From the Business Green story:

Polly Higgins is urging the UN to accept “ecocide” as a crime against peace, alongside genocide and crimes against humanity. The move could make it possible for those individuals and businesses found guilty of environmental harm to be tried at the International Criminal Court (ICC).  Speaking to BusinessGreen on the sidelines of an event in London earlier this week, Higgins revealed that she hopesecocide will be accepted as an international crime by spring 2013. If enshrined in law, the radical idea could have a massive impact on industries blamed for widespread damage to the environment, such as the fossil fuels, mining, agriculture, chemicals and forestry sectors.  “Its not a question of ‘if’ but ‘when’,” Higgins argued, adding that she hopes to secure the change to the law and retire in the next 18 months.

That’s probably overly optimistic on her part, but the time for bemused eye rolling is clearly over.
0
Print
Email
Prev Article
Next Article