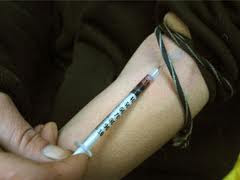 I once called euthanasia, “heroin.”  My point was—and is—that once a culture starts mainlining mercy killing, it will always wants more. And now a Dutch euthanasia advocacy groups wants to create mobile euthanasia clinics.  From the CBS story:

The main Dutch euthanasia advocacy group says it supports creating “mobile” euthanasia teams of doctors for terminally ill patients who want to die in their own homes, rather than in a hospital. The Netherlands legalized euthanasia in 2001 in cases where patients are suffering unbearable pain due to  illness with no hope of recovery. Spokeswoman Walburg de Jong of The Right To Die said Wednesday the idea is a logical extension of its plan — notapproved by the government — to create a clinic for patients who meet the criteria for euthanasia but whose doctors are unwilling to carry it out.

You wouldn’t think that the Netherlands, which has wide open euthanasia, would need a Voluntary Euthanasia Society.

Just to be clear: Dutch doctors make house calls and euthanasia is often done in homes.  Nor is Dutch euthanasia restricted legally to physical pain but also includes mental suffering.  And since the Dutch Medical Association now wants to expand the concept of suffering even further, to include things like lonliness or financial concerns, this is really about creating Dutch Final Exit Network or mobile suicide clinics capable of offing any comer who wants to be offed that those in charge think worth offing.

Like I said, euthanasia is heroin.
0
Print
Email
Prev Article
Next Article