In the late 1920s, T. E. Lawrence contemplated writing a biography of Sir Roger Casement, with whom he had much in common — both were famous for speaking out on behalf of dark-skinned men treated badly by empires, and for having sex with them. Casement’s career was extraordinary even compared with Lawrence of Arabia’s: While serving as British consul in the Belgian Congo, he was instructed by the Foreign Office to prepare a report on any atrocities that King Leopold’s men might be committing. He returned in 1904 with tales of severed hands and ten-year-olds enslaved, and the Casement Report became a national sensation. From the rubber estates of the Congo to the rubber estates of Peru he went, and found a system equally inhumane — if anything worse, because the Putamayo Indians had a “docility of temperament in singular contrast with the vigorous savagery of the far abler African,” and because the company responsible was not Belgian but British. The great humanitarian “Congo Casement” was knighted in 1911.

Five years later, he was hanged for treason and thrown naked in a pit of lime, having been caught importing German arms to Ireland for the Easter Rising. He had also gone to German POW camps to recruit Irish detainees for the revolt, an effort warmly embraced by the Kaiser but which produced only three takers. Public pleas to have Casement’s death sentence commuted — from George Bernard Shaw, Arthur Conan Doyle, and G. K. Chesterton, among others — went nowhere, because word was quietly spread that any statement in praise of the defendant might later prove embarrassing: The British government had in its possession pornographic “Black Diaries,” which recorded Casement’s homosexual encounters in scandalous detail, including how much he paid for them, as well as other measurements. (To be fair, the “White Diaries” describe his expenses down to the last peseta in an equally meticulous fashion.)

It was the Black Diaries that undid T. E. Lawrence’s project. The British Home Office refused to let him see them, and in his opinion — which, on this subject, was more informed than the average man’s — Casement’s biography could not be written without them.

But where Lawrence of Arabia failed, Mario Vargas Llosa has persevered. His newest novel is a fictionalized account of Casement’s life. (It has not been released in English yet, but Graeme Wood of The Atlantic has written a review .) It is called The Dream of the Celt , from the title of a poem Casement wrote in 1898, while in the Congo. Casement had a bug in his brain about Ireland even then; his coworkers quickly learned not to engage him on the topic. His letters home were full of Irish stuff, and, as is traditional for those in the grip of Celtic mania, some of it was poetry — decent poetry, even. Consider this parody of Sir Henry Newbolt’s famous ode to Ireland (“Down thy valleys, Ireland, Ireland / Still thy spirit wanders mad”), which he wrote in a letter to a friend two days after the Newbolt poem first appeared, and which is not at all bad as verse:


But the Congo problem was a more immediate concern than Irish independence, for one could not live in the Congo without being struck by the misery of its inhabitants, or the callousness of the rubber barons toward it. These were the Heart of Darkness years — in fact, Joseph Conrad and Casement met in 1890. (“Thinks, speaks well, most intelligent . . . a limpid personality” was Conrad’s impression.) Even before he was ordered to compile an official report, Casement had noted his concerns in dispatch after dispatch to the F.O.

In a funny twist for a man fated to be hanged on a comma, Casement’s Congo report was almost ruined by inept punctuation. Erring on the side of caution, his publisher decided that the public edition would omit the full names of all towns and tribes and all individuals except those who had given Casement specific permission to cite them. The effect on the reader was thereby much diminished:


N.N. and R. fought, and they killed several R. people and one R. man. O.O.O. took a man and sent him to L.L.L. to go and tell the white man to come and fight with Nkoko. The white man who fought with N.N. first was named Q.R.


But Casement’s facts were rendered into more striking language by Arthur Conan Doyle in Crime of the Congo , and by other authors, and the requisite outrage was eventually stirred — in 1908, King Leopold was forced to relinquish his personal fiefdom, by which time Casement was on his way to South America.

His Putamayo Report was equally celebrated but far less successful in the practical sense, since the worst culprits went unpunished and the system was not reformed. The main Peruvian tycoon, Julio Cesar Arana, became a senator and died in his bed at 88. Arana wrote to Casement when the latter was being held in prison on his treason charge, asking, with indignation still fresh, that Casement retract his “calumnious” charges and “confess before the human tribunal your guilt . . . regarding your dealings in the Putamayo business.”

However, Casement was invited by the British ambassador in Washington to discuss his Putamayo findings with the man whose business it was, according to the Monroe Doctrine: President William Howard Taft. An embassy staffer, writing years after the fact, described the juxtaposition:


President Taft was lured to dinner in the embassy and led away to a quiet corner where Casement was let loose on him. A queer picture they made — the tall Celt, haggard and livid from the Putumayo swamps, fixing with glittering black eyes the burly rubicund Anglo-Saxon. It was like a black snake fascinating a wombat.


But the wombat took no decisive action, and several committees of inquiry later, the system survived unchanged. (Which I expect Vargas Llosa will have a thing or two to say about, being from that part of the world.) Casement got his knighthood and retired to Ireland, where he began getting into trouble in earnest. 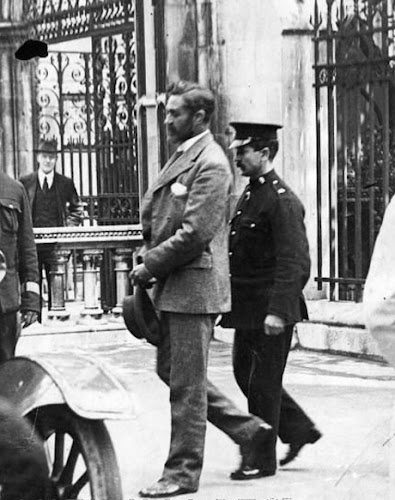 To clarify a misunderstood point: When Casement said he was “hanged on a comma,” he was complaining about his lawyer, not the law. Casement’s original intention was to stake his defense on a romantic speech (written for him by Shaw) claiming that Irishmen could hardly be disloyal to England, not being Englishmen to begin with. The comparison he drew was to the Czech hero Tomas Masaryk, who had been “loyal” to the Austrian empire insofar as he had served in the Reichsrat, but had begun organizing for Czechoslovak independence once war broke out, making him a traitor in one sense and a patriot in another. Britain lionized Masaryk; it would be inconsistent not to lionize (or at least tolerate) Casement.

But it was difficult enough to find a barrister willing to take Casement as a client at all, and finding one willing to argue the affirmative validity of treason during wartime was simply impossible. The man Casement settled upon, Serjeant Sullivan, insisted upon a different defense, the one about the comma. (The punctuation issue is too complicated to explain, but this summary is clear enough. The question is whether or not the treason statute specifies that the crime must be committed “in the realm,” which Casement’s crimes, having taken place in Germany, were not.) This defense went nowhere, as you would expect, prompting Casement to write, “God deliver from such antiquaries as these, to hang a man’s life upon a comma and throttle him with a semi-colon.” He was stripped of his knighthood and hanged.

An Irish death-bed convert to Catholicism who scaled the heights of fame only to be brought down by a notorious court case in which Sir Edward Carson and homosexuality each played a leading role — and you thought Oscar Wilde was the only one. In fact, Roger Casement might have more in common with Wilde than he does with T. E. Lawrence, who never had to endure such public humiliation. But Casement’s story is happier than Wilde’s in at least one respect. Even after his release from prison, Wilde hardly ever stopped complaining that the ignorant philistines had convicted an innocent man, but Casement faced his punishment manfully, on the logic that though he was disgraced, at least he came by his disgrace honestly. As his prosecutor put it in opening arguments, “He has played a desperate hazard, and he has lost it. Today, the forfeit is claimed.”