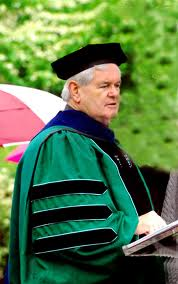 Full disclosure: I have very little respect for former House Speaker Newt Gingrich as a political or moral leader. Well, that’s not quite right. Actually, I have none.

Small case in point: Gingrich has claimed that human life only begins at “implantation,” and yet for some reason opposes embryonic stem cell research.  From the ABC story:

TAPPER: Abortion is a big issue here in Iowa among conservative Republican voters and Rick Santorum has said you are inconsistent. The big argument here is that you have supported in the past embryonic stem cell research and you made a comment about how these fertilized eggs, these embryos are not yet “pre-human” because they have not been implanted. This has upset conservatives in this state who worry you don’t see these fertilized eggs as human life. When do you think human life begins?

GINGRICH: Well, I think the question of being implanted is a very big question. My friends who have ideological positions that sound good don’t then follow through the logic of: ‘So how many additional potential lives are they talking about? What are they going to do as a practical matter to make this real? I think that if you take a position when a woman has fertilized egg and that’s been successfully implanted that now you’re dealing with life. because otherwise you’re going to open up an extraordinary range of very difficult questions

TAPPER: So implantation is the moment for you.

Gingrich is wrong coming and going.  First, let’s look at the accurate science from an embryology textbook.  From my book, Consumer’s Guide to a Brave New World (citations omitted:)

If we want to learn the unvarnished scientific truth about whether an early embryo—wherever situated—is really a form of human life, we need only turn to apolitical medical and embryology textbooks. For example, the authors of The Developing Human: Clinically Oriented Embryology (6th Ed.) assert: “Human development is a continuous process that begins when an oocyte is fertilized by a sperm…”  The fertilized egg is known as a zygote, which “is the beginning of a new human being…” More to the point, the authors write: “Human development begins at fertilization” with the joining of egg and sperm, which “form a single cell called a zygote.  This highly specialized…cell marks the beginning of each of us as a unique individual.”

But Gingrich doesn’t “believe” that.  Yet, he still tells Tapper that he opposes embryonic stem cell research:

True, but that makes no sense—none—if “life” doesn’t begin until implantation, since ESCR begins with the destruction of a non implanted embryo. One can say that life does not matter morally until implantation.  But that is not the same thing as saying that it doesn’t “begin” until then.

We can’t have a rational ethical and moral discourse unless we get our definitions correct.  Moreover, moral assertions have to be based on something other than political expediency.  Newt, the teacher, gets an F in both science and ethics. First, he calls human life, non life, and secondly, he doesn’t explain why opposes the destruction of—from his definition, non life—or how destroying it constitutes dehumanizing instrumental use.