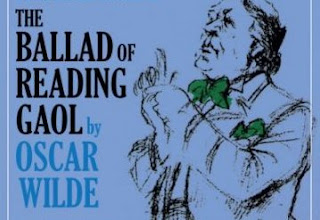 He did not wear his scarlet coat,

For blood and wine are red,

And blood and wine were on his hands

But the coat worn by Charles Thomas Wooldridge, the unnamed hangee of “The Ballad of Reading Gaol,” was   not   scarlet — he was a cavalryman in the Royal Horse Guards, also known as “the Blues,” and you can guess what color their coats are. We know for certain that “the hangman with his gardener’s gloves” in the third-to-last stanza of Part I was James Billington, since gardener’s gloves were not exactly regulation hand-wear for executioners but they were a personal quirk of Billington’s. (Incidentally, Billington started out as an amateur hangman, practicing with dummies on a backyard gallows he built for himself, and ended his career after being required to hang a man he’d known personally from his local pub; all three of Billington’s sons followed him into the family business.) Wilde’s reference to “the dripping wall” in the Debtor’s Yard is accurate — the wall was in constant shade and so plagued by condensation and algae — but “the warders with their shoes of felt” could not possibly have “crept by each padlocked door,” because Reading Gaol’s padlocks were replaced with standard locks well before 1896.

This, dear reader, is the kind of literary analysis you get from a prison guard; clearly Anthony Stokes is a proponent of “close reading.” He is also a remarkable man, to have written a book about Wilde’s poem based on his expertise as a prison guard at (and amateur historian of) the real-life Reading Gaol. In addition to his line-by-line fact-checking of the “Ballad,” Stokes’s book The Pit of Shame: The Real Ballad of Reading Gaol includes a history of the prison’s founding, biographies of its executioners, profiles of such notable prisoners as serial child-killer Amelia Dyer and Easter Rising ringleader W.T. Cosgrave, and a description of prison conditions in the period when its most famous tenant served his two years of hard labor. For instance, prisoners had to wear something known as a “Scottish cap,” which has a downward sloping brim that covers the face and two slits for eye-holes, in order to prevent prisoners from recognizing one another’s faces after being released. The book is full of details of this kind.

Stokes must be something of an eccentric: To the third-to-last stanza of the poem —


In Reading Gaol by Reading town

There is a pit of shame,

And in it lies a wretched man

Eaten by teeth of flame,

In a burning winding-sheet he lies,

And his grave has got no name.

— he gives this annotation:

Wilde would have appreciated the fact that today there is a small brass plaque on the prison wall at every grave listed in the records and at sites shown on old plans, bearing the name of the prisoner and the date of his execution.

These plaques were put up by Stokes himself; he also put one at  Wilde’s old  cell, C.3.3. (now C.2.3). Just imagine the conversation when he asked the warden for permission.

But anyway — about those cookies. Eighteen months into his two-year sentence, Wilde was having a rough time of it. His mother had just died;   legal custody of his children had been given to his wife and her cousin, who weren ’t  likely to let Oscar see his boys again; the warden had denied him permission to mail  De Profundis to Lord Alfred Douglas; and, in general, prison life was sending him into a deep depression. Then, in February 1897, a sweet-tempered Irishman named Thomas Martin was assigned guard duty in  Wilde’s wing of the prison. (Stokes suspects this was the work of some benefactor of  Wilde’s, since a relatively junior guard like Martin would not normally have been transferred to the long-term prisoners ’ wing, generally considered the easiest gig in the prison and claimed by guards with enough seniority to choose their own assignments.) Martin would bring Prisoner C.3.3. (whom he called “ The Poet”)  ginger biscuits, hot beef tea, and copies of the Daily Chronicle . Wilde in turn would pass him notes:

My dear friend, what have I to write about except that if you had been an officer in Reading Prison a year ago my life would have been much happier. Everyone tells me I am looking better  —  and happier. That is because I have a good friend who gives me the Chronicle and promises me ginger biscuits.

Martin wrote a reply at the bottom of this note: “ Your ungrateful I done more than promised.”

Included as an appendix to Pit of Shame is an essay by Theodore Dalrymple (who also wrote the foreword) in which Dalrymple contrasts Wilde ’ s humane maturity after his release with “ the sheer callow, shallow, spoilt-child silliness”  of his Phrases and Philosophies for the Use of the Young (e.g., “ Wickedness is a myth invented by good people to account fo the curious attractiveness of others” ), which Wilde wrote the year before he was sent to prison. When I wrote my senior essay on Wilde ’s conversion to Catholicism, I concentrated on  suffering as the main catalyst of his turn to God and his abandonment of “callow, shallow,  spoilt-child silliness.”  But now I suspect that, although stripping tarry rope until his hands were bloody certainly knocked some sense into his aesthetic head, Wilde might have simply been embittered if not for the leavening of friendship that, thanks to luck or providence, he found in this guard.

As for Thomas Martin, he was fired the week of Wilde ’s release for giving cookies to a boy who ha d been caught poaching and sent to prison because he couldn ’t afford the fine. Stokes explains that “t he young lad unknowingly had told the chief warder of his kindess, and for this Martin was dismissed.”
0
Print
Email
Prev Article
Next Article