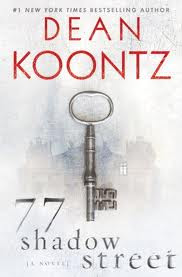 Very strange happenings in my pal Dean Koontz’ new novel, 77 Shadow Street—which opened at number 1 on the NYT Bestseller List. Terrible things happen every 38 years to residents of the old Victorian mansion—now an upscale cooperative called The Pendleton. And now, the time has come again. No, not ghosts.  Something more claustrophobic, more sinister.

This isn’t a book review as I am in mid read. But I wanted to share a couple of portions with you that gave me goose bumps, and because they fall four-square on some of our discussions here—although with the hyperbolic license we allow novelists.

First, one of the protagonists has a meeting at a restaurant and observes the young people at the bar trying “too hard” to appear carefree. He has a chilling premonition:

Still focused on the bar crowd, Perry, “I thought it was just me being old.”

“This feeling that everything is coming apart. More like being torn down. I have this nightmare now and then.”

Silas put away his wallet. Perry Kyser said, “Everything torn down, every man for himself. Worse. It’s all against all.”

Silas looked out at Shadow Street, the Pendleton looming through volleys of rain. “All against all,” Perry repeated, “murder, suicide, everywhere, day and night, unrelenting.”

I know the feeling. I hate the smell of nihilism in the morning.

Even more chillingly, the Evil that encompasses the Pendleton says its existence arose out of our own rejection of human exceptionalism and the embrace of misanthropic species loathing:

I am the One and I see all.

But the blind man in Apartment 1-A is blind in many ways, as are all human beings, even thouse with functioning eyes. They are blind to their folly, to their ignorance, to their history, to the future they will make for themselves. A future born of self-loathing.

Even those who know that the twenty universal constants ensure a universe that will support life, who know intellectually as well as intuitively that the human race must be exceptional and must be graced with a destiny, even they are capable of hating not only others of their kind but also their kind in general.  Some are capable of such self-loathing that they fantasize a world without humanity and take comfort from that dream.

As Dean does, I see a misanthropy rising quietly, steadily—like the Nile at flood.  We won’t face the kind of fantastical threats the characters in 77 Shadow Street do, of course. But unless we come to our senses, the consequences of our self loathing will be paid in the currency of human suffering and stifled thriving.  Indeed, that bill is already coming due.
0
Print
Email
Prev Article
Next Article