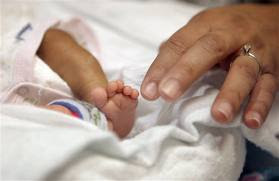 The media is justly celebrating the release from the hospital of a baby born prematurely at 24 weeks, named Melinda Star Guido.  From the CBS story:

At birth, Melinda Star Guido weighed less than a can of soda - only 9 1/2 ounces. After spending close to the first five months of her life at the hospital, she’s headed home. One of the world’s smallest surviving babies, Melinda has been growing steadily and gaining weight since she was born premature at 24 weeks in August at the Los Angeles County-USC Medical Center. She is the world’s third smallest baby and the second smallest in the U.S. Now weighing 4 1/2 pounds, Melinda has made enough progress to be discharged, doctors say. It’s too early to know how she will fare developmentally and physically, but doctors plan to monitor her for the next six years.

That’s great news.  But I wonder: Would the same result have happened after Obamacare was fully implemented?

About 7,500 babies are born each year in the United States weighing less than 1 pound, and about 10 percent survive. Most babies as small as Melinda don’t survive even with advanced medical care. A study published in the journal Pediatrics in 2010 found that many survivors have ongoing health and learning concerns. Most also remain short and underweight for their age.

In other words, the odds of such a favorable outcome were overwhelmingly against Melinda. her care was, to say the least, very expensive, and some of a utilitarian mindset might argue that her “quality of life” will likely be lower than the norm, thereby making the effort more a cruelty than a beneficence.  Under such circumstances, I can absolutely foresee a situation in which the cost/benefit boards that are being established under Obamacare—using “evidence-based” coverage guidelines—would refuse to pay for such an extraordinary effort.  Indeed, we’ve seen both express and implied advocacy in the popular media and professional journals for that very approach.

I am not saying that Melinda would have died under Obamacare.  I am saying, however, that if you take the Obamacarians’ cost/benefit/utilitarian advocacy seriously—and we had better!—that is a very possible scenario.
0
Print
Email
Prev Article
Next Article