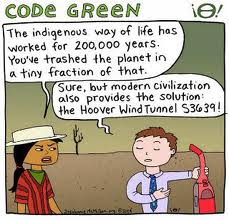 Some global warming hysterics seek to make us all poor to save the planet. How else explain a National Geographic blogger named Stephen Leahy telling us that we should let indigenous people teach us how to live a low carbon lifestyle. From “Indigenous Peoples Can Show the Path to Low-Carbon Living If Their Land Rights Are Recognized:”

Many indigenous peoples are living examples of societies thriving with sustainable, low-carbon lifestyles. Successfully meeting the global climate change challenge requires that much of the world shift from high carbon-living to low. This shift is daunting. Current emissions for Australia and the United States average about 20 tonnes of carbon dioxide per person. In the coming decades that needs to fall to two tonnes per person as it is currently in Brazil or the Dominican Republic. Emissions from most indigenous peoples are even lower and are amongst the lowest in the world.

But indigenous people use low amounts of carbon because they tend to be in terrible poverty or lead hunter/gatherer existences, as in the Amazon. But the IPCC would-be rulers of the world’s economy apparently think that we should embrace our inner destitution:

All options for making the shift from high- to low-carbon living need to be explored and that’s why the United Nations University Traditional Knowledge Initiative (UNU) and  Intergovernmental Panel on Climate Change (IPCC) invited indigenous peoples to a special three-day workshop in Cairns, Australia last week...The Climate Change Mitigation with Local Communities and Indigenous peoples workshop offered a number of “examples of local peoples in Siberia, in Australia, northern Canada and in some African countries demonstrating that it is possible to change our behavior,” he said.“I live in a shack but I love being on my ‘bubu’, my traditional land,” said Marilyn Wallace of the Kuku Nyungka ‘mob’ (tribe) in northern Queensland, Australia.

Living in a shack may be fine for the few, but most of the world has a higher ambition.  But reducing living standards is apparently part of the anti-global warming cause:

“The IPCC has been issuing major reports for 20 years now and things have only gotten worse. What does that say? It says it is not changing the way people behave or the systems that reinforce this,” said Tauli-Corpuz, a member of the indigenous Kankana-ey Igorot community in the Philippines. Dealing with climate change means changing the current economic system that was created to dominate and extract resources from nature, she said. “Modern education and knowledge is mainly about how to better dominate nature. It is never about how to live harmoniously with nature.” “Living well is all about keeping good relations with Mother Earth and not living by domination or extraction.”

That’s nothing less than a prescription for mass poverty. Do we really want most of the world to have 60 year life expectancies and lives often threatened by hunger and want?

If we love our fellow man, we will want to help those currently living very poor in the world thrive. That will increase life expectancies, reduce illness and suffering, and promote human freedom.  But thriving requires good transportation, electricity, bounteous energy, and the development of resources.  There is no other way. And for at least the next few decades, that means fossil fuels. Destitution should be Enemy Number One, not carbon dioxide.
0
Print
Email
Prev Article
Next Article