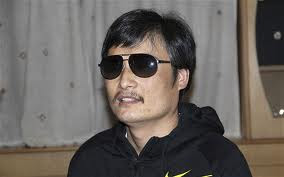 In a victory (of sorts) for human rights, and a good piece of diplomacy by the Obama Administration, the persecuted Chinese human rights activist, Chen Gugangchen, has been freed from the national gulag that is the People’s Republic of China. He’s coming to “study” in the USA with his family. (Pity his relatives and supporters left behind.)

What, did he protest?  The continual breaking of Chinese law.  Okay, but what law?  Those against forced abortion/sterilization and infanticide that are integral in the practice of China’s infamous one child policy.  From “Is Pro Life Cause Celebre Chen Guangchen Really Pro Life?”, in Religion Dispatches:

Forced abortions and sterilizations are illegal in China under a 2002 law that gives individuals the right to an “informed choice” in these matters. However, the central government publishes national population targets and holds local officials accountable for meeting them. Some officials resort to illegal and coercive tactics to meet their quotas. These abuses happen primarily in rural areas where families want more children to work the land. In the cities, most couples voluntarily limit the size of their families.

The central government disavows responsibility for the actions of these officials, but it has never made an example of any official who has been caught coercing women, according to Steven Mosher of the Population Research Institute. Chen is being persecuted by local authorities, but Beijing has been unwilling or unable to help him. In 2006, he was sentenced to over four years in prison for “destroying property” and “assembling a crowd for the purpose of disrupting traffic”—despite being under house arrest at the time. According to Amnesty International, Chen is a prisoner of conscience who has been jailed solely for peacefully defending human rights.

I wouldn’t claim that those in the cities who obey an unjust law “voluntarily” limit their family size. Were African-Americans who only used “their” drinking fountains under Jim Crow “voluntarily” not using those reserved for whites? Please. It is the single child policy that is unjust—indeed, a violation of basic human rights—which too many of a certain political/cultural persuasion so often neglect to mention.

The intriguing question is whether Chen will become a pro life activist in the USA. The pro life community has embraced him as one of their own, and even chastized pro choicers for not working hard enough on Chen’s behalf.  From a column by the National Right to Life Commitee’s Dave Andrusko:

So, why have abortion advocates been struck deaf and dumb? The explanation, of course, is not just that these atrocities are taking place thousands of miles away. And clearly they do not favor coerced abortion, although I’ve been struck by how many times I see reader responses to newspaper stories which take the line that what China does is its business.

But having the word “abortion” and “human rights” in the same sentence strikes too close to home. Better silence in the face of unbelievable brutality and cruelty than to even entertain the thought that there is another party whose human rights are abridged every time an abortion occurs, whether it takes place in a rural village in China or an urban abortion clinic here at home.

I don’t know about that, but the piece I first quoted, written by lefty journalist Lindsay Beyerstein, is clearly intended to defend against the meme that Chen is pro life in the American sense of the term, and that the pro choice community was muted in his support.

Only time will tell if Chen will engage the broader “life” issues, and what the government’s attitude toward his continued residence in the USA will be if he does.  I suspect he’ll stay focused on his homeland.  Whatever. For now, let’s all of us—pro life and pro choice—celebrate the liberation of a very courageous and impressive man.
0
Print
Email
Prev Article
Next Article