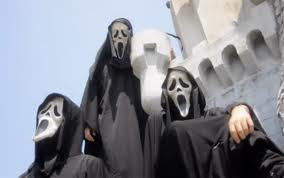 The Final Exit Network “counsels” suicidal people on how to kill themselves with helium and a plastic bag.  They also “attend” the suicides and apparently “clean up” afterwards so that investigators are unaware of the helium element in the deaths.

This has led to indictments for the suicide of a mentally ill woman in Phoenix, with two guilty felony pleas and an acquittal of one of FEN’s Big Heliums because he wasn’t there and because the judge did not let the jury learn the victim was mentally ill.  Also, indictments in Georgia that were thrown out when the ridiculously worded law against assisted suicide was rightly declared unconstitutional, a problem since remedied.

Now, an indictment in Minnesota. From the Star Tribune story:

A national right-to-die group is headed for a court battle in Dakota County after investigators pieced together evidence linking it to an Apple Valley woman’s suicide nearly five years ago. Dakota County Attorney James Backstrom announced Monday that a local grand jury had indicted the Final Exit Network and four of its members on 17 counts of assisting a suicide and interfering with a death scene.

The network faces four counts, two of them felonies. Altogether, the grand jury returned indictments on nine felonies related to assisting in a suicide and eight gross misdemeanors for interference in a death scene. “If the people of our state wish to authorize assisted suicide, this should be done through clearly defined laws enacted by the Minnesota Legislature with proper restrictions and requirements to ensure the protection of a terminally ill patient and the direct involvement of the patient’s physician and immediate family,” Backstrom said during a news conference at the county law enforcement center in Hastings.

Please, Mr. Prosecutor, assisted suicide is not about terminal illness!  This alleged victim wasn’t apparently terminally ill. Neither were the victims in the Georgia and Phoenix cases. And even if a law were passed allowing assisted suicide for the terminally ill, the FEN ghouls would still do that helium voodoo to those unqualified to be made dead by doctor-prescribed suicide.  But he’s quite right about the necessity of following the rule of law—a societal problem on this issue since the Kevorkian days.

If FEN members were there and cleaned up the helium apparatus as charged, leading to a wrong coroner’s report, I don’t see how they get out of the conviction. Time will tell. But if they did the deed, I hope they serve time.  Good for the prosecutors for bringing this case!
0
Print
Email
Prev Article
Next Article