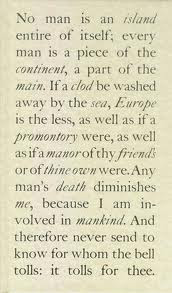 The right to life is morphing before our very eyes into a right to death.  Witness the recent Canadian judge who ruled, in essence, that there is a right to suicide because it isn’t a crime to kill oneself.  In the UK, in the meanwhile, Tony Nicklinson—whose lawsuit seeking the right to be killed by a doctor we have discussed here before (to which a commenter claiming to be Mr. Nicklinson responded)—has now gone to court.  The argument by Nicklinson’s lawyer is both disturbing and, it seems to me, illimitable. From the Telegraph story:

Mr Bowen QC argued the law is currently “failing to protect the very   people its intended protect” and was forcing assisted suicide “underground.” He added: “It encourages those with the means to Switzerland. For those without the means it offers ‘Hobson’s Choice’ of amateur DIY death or   continued suffering. Those who cannot end their own life are left to suffer. “The claimant has made a voluntary, clear, settled and informed wish to end his own life with dignity, and is too disabled to do so. “The only means he can practically end his own life is with medical assistance. “He is condemned to an existence he doesn’t wish to live with, a state of   suffering nobody should be forced to endure. “This state of affairs constitutes a serious interference with his common law rights of autonomy and dignity.”

Killing is not a medical act. Why not just say he has a right to hire a hit man?  The result would be the same.

More seriously, if committing suicide is somehow a right, how can we engage in suicide prevention, particularly when coupled with involuntary hospitalization?  (Many people are alive today who wouldn’t be, but for such interventions.) Indeed, the very argument that people who can’t afford to go to Switzerland are somehow wronged legally because they can’t obtain a UK doctor’s lethal aid would create a right to death.

What possible limit could there be on such a liberty?  None, with the exception perhaps, of a temporary suicidal ideation. Consider:

Mr. Nicklinson’s plight is very upsetting for all empathetic people. We can all understand his desire for control.  But this isn’t just about him. Not by a long shot. If he gets his way, people will die who would later be glad to be alive had they received intervention or survived long enough to change their mind (as my once suicidal hospice patient with ALS did). People will be coerced or persuaded into death, as happened to MS patient Myrna Lebov at the hands of her husband George Delury.

What about empathy for them?  In these pro suicide times, it is decidedly lacking.