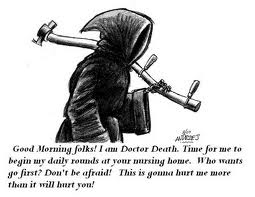 Switzerland, which already permits suicide purveyors to make a lot of money out of suicide tourism, is now bringing self termination into nursing homes and hospitals. From the Swiss Info story:

Vaud is set to become the first Swiss canton to introduce a law explicitly regulating assisted suicide. On Sunday, 62 per cent of people in the French-speaking canton voted in favour of a proposal obliging nursing homes and hospitals to accept the practice. The plan was put forward by the cantonal parliament and when the new law comes into force, doctors in nursing homes and hospitals must respect the wishes of a person requesting assistance to die. However, certain conditions must be met before the wish is granted: the person in question is suffering from an incurable illness or injury and is of sound mind.

The decision whether both criteria are met is taken by the head of the nursing home or, in the case of a hospital, by the chief physician. This proposal was supported by the associations of Vaud nursing homes and doctors and put forward to counter an initiative by assisted suicide organisation Exit, which would have gone further by guaranteeing people in care facilities the unconditional right to die. Voters rejected Exit’s initiative.

The West is fast becoming—and in some regards has already become—pro suicide.  You doubt it?  Read the news.  And note here that legalizing assisted suicide was considered the moderate course—the only way to keep doctors from being forced to make people dead on demand.

But that is coming.  Indeed, Netherlander doctors are already forced to participate in the euthanasia deaths of legally qualified patients—either by doing the deed or finding a doctor who will—according to an ethics ruling by the Dutch Medical Association (KNMG).

By the way, Switzerland has declared the intrinsic dignity of individual plants in its constitution and makes it illegal to flush a live goldfish down the toilet. Think about it.
0
Print
Email
Prev Article
Next Article