Back to the Songbook—I can’t exactly explain why it has had to be dormant awhile.

To understand Rock, I have argued, you have to wrestle with the 60s. This post is an attempt to capture perhaps that era’s most intoxicating moment, the early folkie and folk-rock one of expectation, where it seemed The Times, They-Are-A-Changin’ , and in ways that invited heroic deeds. It could be read as a companion piece to my post on ”Blowin’ in the Wind,” except the focus is entirely upon the feeling, with the words neglected. For there are recorded voices, melodies, and timbres from those days capable of directly transmitting what bliss it was to be alive in that new dawn .  Take, for example, the first song on the first (1960) Joan Baez album, “Silver Dagger.” Sadness, yes, but bliss aplenty. And in a new way, I think.

Something new in pop music becomes available with the folkies, unleashed upon a larger audience a few years later via certain forms of rock.  Out of a middle-class rendering of old-time ballads and such, a technically slight shift in sound somehow declared a new attitude and possibility: poetry was going to be lived in the days to come. Romanticism and Religion-of-Art would walk out of their Chopin-esque chambers into the fields and forests, highways and by-ways, guitar in hand. Why this musical idea couldn’t make itself felt earlier, say in the 20s, or the late 40s, is hard to say. For the first 40 or so years of recorded music, one seldom put a non-classical record on expecting that kind of profundity: a Charlie Parker or an Edith Piaf might give you such moments, but still, they came wrapped in the mantle, the conventions, of night-club music. But folk music, it came in a mantle of high-minded earnestness.  It had a religious aura: it was willing to sing hymns, and had a side ready to lose itself in the contemplation of the spare.

Again, it wasn’t a new sound, or it shouldn’t have been, being revivalist to the core. On that note we can compare its roots-mining with that of the Rolling Stones. The folkies’ famous initial rejection of Dylan’s electrification was also a rejection of the overt sexualization offered by the Stones and such.  The Beatles and Stones both used various ingredients we might call folk elements, and whereas we might dwell upon their deficiencies compared to the best blues, soul, and country artists of America, like them, they wanted filled dance-floors.  But the folkies loved obscurity, lonesomeness, and let their hostility to the commercial become a de facto hostility to the dance. Nonetheless, here I want to highlight the fact that the British bands lacked a certain intangible quality found . . . well I don’t want to say in San Francisco or in Greenwich Village, as much as I want to say in the hills, forests, and wild places of California, or of upstate New York, and even in the green pastures of . . . Harvard University . The British Big Beat emerged out of a night-club Cavern, but the voice of Joan Baez, it came from here: 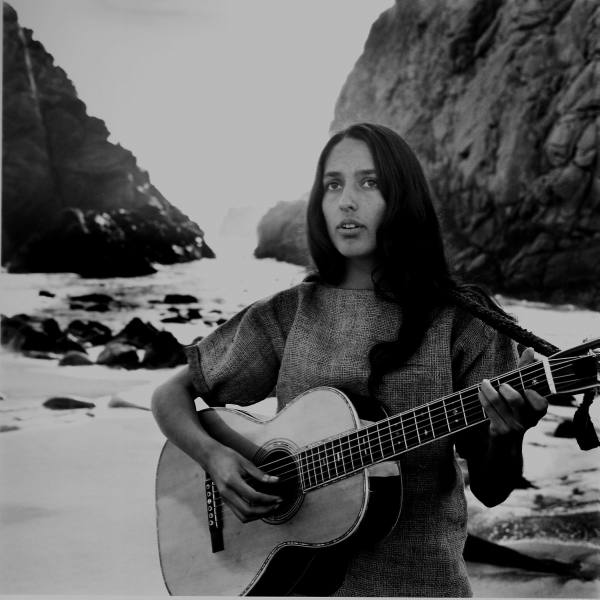 And, of course, from here also:

Anyone interested in the 60s can trace back all the key influences—politically in Gitlin , literary-wise in various accounts of the Beatnik poets, drug-wise in The Electric Kool-Aid Acid Test , etc. But all those roots of the 60s seem rather tawdry, wordy, decadent, smoke-filled, and over-studied, compared to a certain wind of idealism coming from the folkies, echoing up from a Joan Baez standing barefoot somewhere on the California coast, and out to the world.

How did it sound out there? Of all people, it is V.S. Naipaul who perhaps best captured Baez’s magic, in a scene in A Bend in the River , where he’s describing a cosmopolitan mid-60s party in a newly-independent African state.

The narrator is one of those Indians who grew up on the Tanzanian-Kenyan coast, but had to flee the ethnic cleansing unleashed by independence. Most of the novel up to this point has described his impoverished difficulties in starting a new life in Congo/Zaire, but this scene follows his having made friends in the elite government compound—he now seems poised to rise into a more intellectually stimulating and comfortable life:

And the mood became sweeter. The music that was being played came to an end, and in the wonderfully lit room, blurred circles of light thrown onto the ceiling from the lamps on the floor, people stopped dancing. What came next went straight to my heart—sad guitars, words, a song, an American girl singing, “Barbara Allen.”

That voice! It needed no music; it hardly needed words. By itself it created the line of the melody; by itself it created a whole world of feeling. It is what people of our background look for in music and singing: feeling. It is what makes us shout “Wa-wa! Bravo!” and throw bank notes and gold at the feet of a singer. Listening to that voice, I felt the deepest part of myself awakening, the part that knew loss, homesickness, grief, and longed for love. And in that voice was the promise of a flowering for everyone who listened.

. . . Not all the songs were like “Barbara Allen.” Some were modern, about war and injustice and oppression and nuclear destruction. But always between them there were the older, sweeter melodies. These were the ones I waited for, but in the end the voice linked the two kinds of songs, linked the maidens and lovers and sad deaths of bygone times with the people of today who were oppressed and about to die.

It was make-believe—I never doubted that. You couldn’t listen to sweet songs about injustice unless you expected justice and received it much of the time . . .

I do not quote Naipaul to dismiss the early-60s idealism I’m associating with Baez. Yes, I have elsewhere shown how the Polly-annish Pantheism that characterized many hippies is contemptible, but Joan never struck me as one of those who would praise, as the Byrds did, someone who

. . . walks with ease, and all she sees
is never wrong or right.

Even though Naipaul is absolutely right that Baez’s idealism has roots in “suburbia,” i.e., in the modern democratic realm of middling comfort, college aspirations, and protection from serious injustices and deprivations, it is important to see that it also has roots in America’s spiritual longings, and here I mean the non-pantheistic ones. They trace back to the Boston and Philadelphia of old, both to Winthrop’s and Penn’s era and to that of the Revolution too, but for 20th-century folkie folk, they were mainly channeled through progressivism and Marxism (although often these were channeled through Christianity once more).

Joan herself came from a family that had converted to Quakerism, and prior to that, her grandfather had converted from Catholicism to become a Methodist minister. She is from a priestly line, then. More broadly, it is striking how many Christian-esque aspects one finds in folk-linked 60s music, for example, in the way the guitars in folk-rock go for a chiming kind of sound, in the choir-boy voices of Simon and Garfunkle, or in the way the name given Peter, Paul, and Mary, or the lyrics utilized in many songs, woo the audience with Biblical references. That is linked, I say, to a final flowering of the Social Gospel that occurred in those days. Before beginning its long dwindling of membership, Emerson-influenced Christianity—I have Harry Emerson Fosdick of The Riverside Church in mind here as much as I do old Ralph Waldo—had a last surge of vitality, that among other things, helped King kill segregation. Without knowing that it’s justified to do so, I’ll lump the Sister Corita side of Catholicism in with that. She seems an apt visual complement to musical moment I’m seeking to capture:

But enough Zeitgeist Influence Analysis. What I really quote Naipaul here for is his ability to describe the universal feelings of longing elicited by Joan’s music, ones (whatever their relation to Christian hopes) that were like those stirred by the greatest Indian singers of old. All that, Naipaul seems to exclaim, even though this music came right out of the bosom of comfort!  But there it nonetheless was.

That voice was the promise of a flowering for everyone who listened.

Exactly. Do listen to it again.  The romance of the 60s properly begins with such moments, and such promises.