Here’s a song that knows what it is to feel loneliness midst the Summer of Love:

Yeah, I heard a funny thing:

somebody said to me,

that I could be in love, with almost everyone.

I think that people are, the greatest fun…

and I will be alone, again tonight, my dear.

With “Alone Again Or”, the rock band named Love explored a basic problem with what their fellow hippies were saying about Love.  It was fine to seek to love everyone, say, to get a charge from the reciprocal vibe of brotherly love at the Happening, but this would never quite feel like falling in love, and having that love returned. That love, eros, spoke to a more primary need.  And without the need tended to, the practice of brotherly love could still leave one feeling alone.  Yet again.

In a number of recent Songbook posts, I’ve explained how the hippie tendency was to combine and conflate three different sorts of love:  1) a brotherly love for all mankind, 2) eros, the sort of love that makes you fall for a particular man or woman, and 3) free-love.

It’s fairly obvious how, midst this conflation, some might think that 1) was more easily realized if one engaged in 3). Next time, when I consider the film Taking Woodstock, I’ll say more about that aspect of the conflation. And of course, everyone knows that the line separating 2) from the broader “lust” that fuels 3) is anything but a neat one—arguably, the hippies attempted nothing terribly new by trying to more thoroughly blend those.

But these combinations are less interesting than that of 1) and 2), the one explored by “Alone Again Or.”  The narrator is initially open to the idea touted in a song like Jefferson Airplane’s “Let’s Get Together” of trying to love everyone, but finds that it fails in practice.  He says, “No, that’s not doing it for me. And no, that’s not really what I mean by love. What I want is you. Your love and your presence.”

The first stanza sets up the divide between the song’s lover and his beloved:

all the times I’ve waited patiently for you,

as you do, just what, you choose to do…

and I will be alone, again tonight, my dear.

This beloved apparently expects her lover to accept her free-choosing not-tied-down ways, to say about them yeah, …it’s alright. Now these could be any sort of selfish ways that leave the narrator waiting for her and spending a number of nights alone, but here’s a further interpretation: just as he initially seems to affirm the touted hippie embrace of fraternal love with the second stanza’s yeah, he initially seems to affirm the expected hippie acceptance of open-relationships with the first stanza’s yeah. The repeated pattern asks us to connect the two apparent affirmations.  Such connection makes more sense if what the first stanza suggests is not simply that his beloved expects him to accept her freedom on her own terms, but that she further does so in the name of the new free-love. Isn’t her lover hip?

Whatever he might say, the narrator is unhappy about her treatment of him. It’s actually not alright.  Songbook readers might recall certain lines from that other song on Jefferson Airplane’s first LP, “And I Like It,” where the singer says, This is my life, I’m satisfied. So watch it babe, don’t try to keep me tied.  In the first stanza of “Alone Again Or,” if my interpretation is correct, we’re given what the other side of that feels like, particularly if the other side is really in love.

Now a bit about the band for those who haven’t heard of them. Nearly every connoisseur of 60s rock loves Love. While they did not seek or win much popularity beyond their LA base, they produced one fine folk-rock/gargage LP, Love, and two LPs that easily stand among very best of the era, Da Capo and Forever Changes. The latter is particularly praised, both for one of the best uses of orchestral strings in rock and its lyrical sophistication. That praise is deserved, but for me it’s Da Capo that is the real knock-out, as a briefly described in Songbook # 44.

Their name always had an ironic aspect to it. Yes, “love” was the watchword of the folk-rock songs, and sure, Love were right there with what was hip and au courant, penning their share of love-celebrating songs, and saying, in the pantheistic blather of the times, that they wanted their music to “engulf the listener as love engulfs the world.” But Love evinced a tough side also, recording a number of remarkably angry songs:  the garage-punk classic “My Flash on You,” one the fastest versions of “Hey Joe,” a cover of “My Little Red Book” that ditches the lost-love vibe of the original, and finally “7 and 7 Is,” a breath-taking hardcore punk prototype from early ’67, complete with a nuclear explosion finale and lyrics about throwing one’s Bible in the fireplace.

By late 1967’s Forever Changes, this more aggressive musical side had melted away, and the gently sad Spanish-y drama of “Alone Again Or” shows just how potent their artistry was in its more pensive mode. Still, a certain tension between their cynical side and their wistful one remained, sometimes embodied in the different lyrical approaches of leader Arthur Lee, and of Bryan Maclean, the writer of this song.  Both contributed to the general feeling of The Search that pervades Forever Changes, culminating in one of the most honestly philosophical of rock songs, “You Set the Scene.”  The original line-up was fired by Lee 1968, and despite all his musical genius, he was not able to assemble another group worthy of the name. 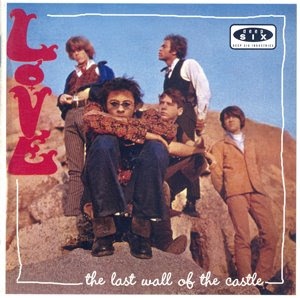 Now if I could just understand why Maclean put the word “Or” in the title of this song. Any ideas?