It’s George Washington’s birthday, and the problem a lot of us have is that he comes across too stiffly for us to really appreciate. What we need are the best books and, essays, as well as the best film depictions and art-works, that bring the actually quite passionate man to life. Here I’ll offer a beginning draft for that list, and let FT readers fill it out as they see fit in the comments. 1.) Chapter 2 of Gordon Wood, Revolutionary Characters:  What Made the Founders Different

So you don’t have time for one of those big bios of Washington? This book of biographical sketches might fit the bill. Wood makes the eighteenth-century ideal of the enlightenment gentleman key to understanding Washington, which works pretty well.  It explains how he deliberately put on a character for the sake of serving his country, and took great pains to live up to it. This does a lot, I think, to explain the way can he seem too artificially proper to us today.  The rest of the book is also great, with deft sketches of Franklin, Jefferson, Hamilton, and Burr. Wood is in certain aspects less successful with Madison and Adams, but the whole thing’s a treat. An excellent audio version exists.

Morse is able to convey a sense of the man’s intensity and ambition constantly kept restrained by a cultivated sense of propriety, concern for others, and humility. A sense of his magnetism is kept. There are so many things to praise about this series in general, but its casting, which also resulted in an unforgettable portrayal Jefferson, was perhaps its greatest triumph. 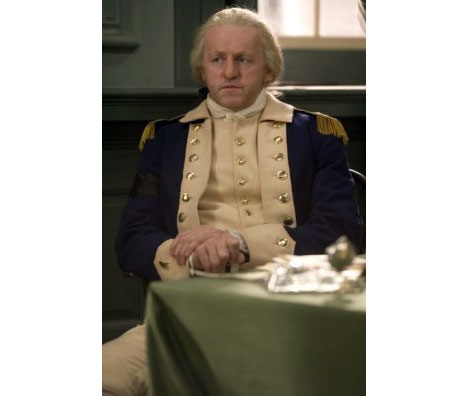 I haven’t read it yet, but simply based on Dr. Bobb’s talk about it, which it was my pleasure to hear yesterday at Christopher Newport University, I know it’s not to be missed.

Flexner’s single-volume biography, condensed from his four-volume biography. It reads well, and feels quite comprehensive. The main argument is right there in the title.

Another one I haven’t read yet, but based on the excellence demonstrated by his short-form biographies of Hamilton and Madison, both of which I enjoyed quite a bit, I’d say it’s a must.  Probably could say the same about Ron Chernow’s more-standard long bio, but again, the thing about Brookhiser is that he draws you into to key aspects of a man’s life, and you never get that 700-pages to go moment of discouragement.

6.) If you’re interested in the debate over Washington’s belief in God, i.e., about whether he was a) a deist or just b) a particularly reticent Episcopalian, I’d refer you to two books. The Political Philosophy of George Washington by Jeffry Morrison, which contains a section that makes an educated guess in favor of the first proposition, and Washington’s God by Jana and Michael Novak, which is an entire book arguing for the second. I think the evidence sides more with Morrison, but he makes it clear that it was impossible that Washington’s deism was of the stereotyped “clock-maker” kind:  rather, and a bit like Alexis de Tocqueville, Washington believed in a God that was very much active in the world, and he may have believed in an afterlife, but he seems not have believed in the divinity of Christ. No-one can know another’s heart, but Morrison has convinced me that the evidence leads to favoring that hypothesis.

I’ll leave it there for now—Thomas Kidd supplied a a much more expert list over at Patheos last year, and again, I’m counting on FT readers to provide their own recommendations, especially of the article-length or chapter-length variety.

Anyhow, a happy George Washington’s birthday to one and all!