On previous Chelsea gallery walks featured in this forum , I have played the role of naysayer. Just as Nietzsche could not forgive Christianity for what it did to Pascal, I had difficulty forgiving the art world for what it did to friends who might have been wonderful painters. Saddled by a (not untrue) narrative of art historical expiration, I chose to remain perpetually unimpressed by Manhattan art offerings, and the galleries for the most part cooperated with this attitude. Repeat visits to Chelsea, however, have worn down my internal polemics. On a recent visit, I took the inductive path, relaxing my theories and looking more closely instead. It helped that my companions were less overwrought than me by the easily identified postmodern excesses of contemporary art. Permitting the galleries to carry me along made for a pleasant afternoon.

But it wasn’t just my attitude that changed; the exhibits have as well. The economic downturn may have been good for the art world, at least as that world is represented by the cluster of Chelsea galleries on the West Side of Manhattan between 10th and 11th Avenues. Less of an art market means less opportunity for risk”less mangled Madonnas and contorted crucifixes, less galleries willing to give over their expensive real estate to art that shocks before it sells. In addition, whereas Republicans in power had galvanized the art world’s Democratic bloc, there is now less of a mandate for protest art. The painter who might have previously gotten away with “We Live in a Police State” spray-painted on plywood might now have to up his or her aesthetic game. 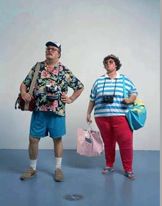 This time, there was an unusually high amount of what Etienne Gilson would call “arts of the beautiful,” as opposed to arts that serve didactic or politicized ends. Several shows contained works that passed the living room test, that is, pieces one would actually want hanging in one’s living room. On previous walks, canvasses that a person with reasonably sized walls might actually consider purchasing amounted to maybe twenty percent of what was on offer. As of May 2009, that percentage seems to have jumped to nearly half.

This is not to say the standard épater le bourgeois fare was absent. The first gallery our group entered was a mockery of fat America. Duane Hanson’s painstakingly crafted trompe l’oueil mannequins of life-sized overweight American tourists stood in blank white rooms, complete with floral pattern shirts, dangling cameras and uneven patches of sunburn. The exhibit served as a sort of art world threshold, marking a border between profane and sacred as clear as any Byzantine iconastasis. The sculptures seemed to suggest that by strolling the Manhattan gallery scene, you”art lover”are leaving such uncultured creatures behind. 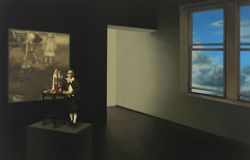 But soon the beautiful began. Andrew Sendor’s show at Caren Golden Fine Art, Based on a True Story , was a delight. Previously, mere mortals such as myself might have been brushed aside as gallery owners bee-lined for AmEx Centurion cardholders, but in this market, everyone gets the tycoon treatment. Not only did the gallery owner eagerly describe the paintings to our group, he introduced us to the painter as well. This was no Kafka hunger artist staring emaciated from behind the bars of his display cage, but a courteous presence who was genuinely eager to share the inspiration of his work. Sendor’s chronological collages mixed nineteenth century Victorians figures into contemporary museumscapes to create “uncanny hypothetical scenarios.” In one painting , the artist chose to depict Our Lady of Mount Carmel, and was happy to learn from one in our group the background of the imagery he had innocently, not ironically, employed. While unmolested Marian imagery came as a welcome discovery, on further thought, it is disconcerting that Christian imagery serves as just another trope among many”no longer evoking either piety or anti-piety. Beyond mangled Madonnas: Indifference, or a first step towards genuine recovery?

The show’s press release explains that Sendor’s paintings are intended to depict a taboo violation, asking “What would happen if taxidermied humans were put on display as art?” But Sendor is too late. Several times that day already we had seen bus ads for the Bodies exhibit that does just that. Consequently the taboo talk seemed half-hearted. Once in art history, violations of social protocol had to fly under the cover of visual appeal. Now, visual appeal has to fly under the cover of art that dutifully promises to “break taboos.” And so, I’ll call Sendor’s bluff. He may have slapped a thin veneer of post-humanist radicalism onto his work, but underneath they are beautiful paintings that pass the living room test, and can be appreciated as such.

Next came Paul Waldman’s eerie diptychs”landscapes punctuated with tiny nude figures hovering in the sky. The suspended destinies of these nudes prompted eschatological questions”were they going up or down? Taking advantage of the interpretive liberty that few would dare proscribe, Waldman’s work can be named a distant cousin of Signorelli’s famous Resurrection of the Flesh , and is better for the relation.

After politely excusing ourselves from some performance art, our next stop was the spacious Axelle Fine Arts where another owner pleasantly greeted us and offered to exegete the paintings. Axelle was packed with average to excellent quality portraits along with land and cityscapes. I took a moment to enjoy a simple Parisian miniature of the Seine. In 1968, bands of students stormed the École des Beaux Arts , demanding an end to bourgeois painting and sculpture and, legend has it, hurling plaster casts into the Seine in an effort to erase the artistic past. Looking at that skillfully painted Parisian miniature was enough to forget the revolution ever occurred.

Even the horrific had its own beauty that day. The Iraqi-American artist Ahmed Alsoudani produced neo-Guernican meditations on the cruelty of war. Back in 2007, I recall protest art that featured videos of naked people shooting off machine guns and rolling in fake blood. Things have changed. Alsoudani’s work contains an equally disturbing message, but his paintings were executed responsibly enough for that message to actually be received. 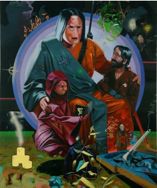 Scott Anderson’s show, Join or Die , afforded neon-splashed scenes of apocalyptic barbarity, intriguing commentaries on the book of Revelation. These skillfully executed neo-surrealist nightmares left an abiding impression”they were lamenting, not endorsing, metaphysical confusion. American ideals are here referenced, as in Declaration , but not celebrated. Such ideals have instead been marshaled to the service of a menacing, neo-pagan dogma that demands conformity. It would have been simple, even logical, for Anderson to make Christianity the culprit faith, but he intentionally invented new religious symbols to suggest a sort of unforeseen oppression that might lie on the horizon as Judeo-Christian faith recedes. Join or Die is an apt title, but the exhibition might just as easily have been called Dictatorship of Relativism . All this is communicable only because Anderson paints very well. In his own words:

One often hears of the “death of painting” or the “end of history.” I have acknowledged those facts, and see in them an opportunity to rebuild from . . . the rubble.

So has the Seine burped up its casts? While one particularly good day in Chelsea is no cause to declare the resurrection of painting, there is reason to think that groundswell efforts at artistic renewal”from the New York Academy to the Studio School to Jacob Collins and company”have paid off. The art world is notoriously fickle, but I’ll venture a current diagnosis: Painting is not dead; it was only sleeping, and an economic crisis may have nudged it awake.

Matthew J. Milliner is a Ph.D. candidate in art history at Princeton University. He blogs at millinerd.com .