Augustus Saint-Gaudens was the Walt Whitman of American sculpture.

Born in Dublin in 1848 to a French father and Irish mother and soon brought to the New York as an infant, Saint-Gaudens embodied the emerging fresh vitality of a country then entering a period of explosive industrial growth. Too young to serve in the Civil War, Saint-Gaudens came of age in the warm glow of Union victory and the ascendant sense that America was a nation destined to serve the noble purposes of humanity. Both dimensions”the vitality and sense of purpose”are vividly present in his art.

A special exhibit at the Metropolitan Museum of Art (open through November 15) offers a splendid opportunity to engage the work of Saint-Gaudens. But there is more on view than the artist and his work. Saint-Gaudens was first and foremost a public artist, famous for his memorials honoring the Union leaders of the Civil War. His sculpture gave solid and enduring form to a heroic vision of American identity, a vision very much in the ascendancy in the late nineteenth century.

But first to the artist himself. At age thirteen, Saint-Gaudens began his artistic training as an apprentice to a cameo-maker in New York. Popular during the Victorian era, cameos are carved reliefs, often portraits of individuals, made out of semi-precious gems or shells. In addition to the training that this fine work provided for his hands, Saint-Gaudens also took art courses at the Cooper Union and the National Academy of Design. By age nineteen, this talented young man was off to Paris to study the École des Beaux-Arts, and then on to Rome, where he cultivated the classical style.

In Rome, Saint-Gaudens sculpted portrait busts, and he became popular among wealthy Americans who wished to memorialize themselves in the style of Cicero or Caesar Augustus. The exhibition includes some examples, and one can see that the young artist was quite capable of making a modern businessman or diplomat look like a Man of the Ages, and a woman a virtuous Roman matron.

Yet Saint-Gaudens was not merely a fine neo-classical sculptor. His marble statue of Hiawatha (on view in with other American sculpture in the main atrium of the American wing of the Met) is romantic and sentimental, and in some of his portrait reliefs, Saint-Gaudens provides leafy backgrounds after the style of William Morris that evoke a warm, natural, and intimate atmosphere rather than the cold eternity of antiquity. 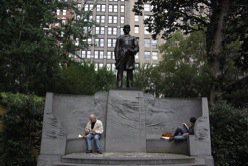 Saint-Gaudens’s mature work did not, however, go in the direction of either sentimentality or intimacy. Instead, he mobilized and energized the classical evocation of timelessness by infusing an atmosphere of determination and energetic purpose into his sculpture. The result was a perfect combination for an America eager to give monumental expression to her emerging historical confidence.

Saint-Gaudens sealed his reputation with his statute of Admiral David Farragut, installed in Madison Square Park in 1880. The windblown coat puts the Admiral on the bridge of his frigate. The stern look in the bronze face brings to mind Farragut’s famous words during the Battle of Mobile: “Damn the torpedoes, full speed ahead!” The overall effect: a memorial that proclaims a gritty and realistic America that is willing to fight for her ideals. 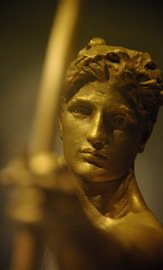 The statue of General William Tecumseh Sherman on the southeastern corner of Central Park conveys an even more potent atmosphere of worldly vigor. The wind blows the erect general’s cape as Lady Victory leads the way. The genius of the memorial is found in the forward movement of the statue. Great and heroic deeds have been done”and more are to be done in the future, if only America will lean into the winds of destiny to make the world anew.

Saint-Gaudens made of number of statutes for memorials commemorating that secular saint of the Civil War era, Abraham Lincoln. However, his greatest commemoration of the Civil War”and the most perfect expression of his artistic genius that combined classical immortality with a distinctively American sense of urgency”is the Shaw Memorial in Boston, a project he worked on for over sixteen years.

Colonel Robert Gould Shaw was a figure widely celebrated by abolitionist Boston. He volunteered to command the first all-black regiment of soldiers in the Civil War, the Massachusetts 54th. He led his soldiers in a futile assault on Fort Wagner on July 18, 1863, where he and many of his men died. Although the bodies of white soldiers were returned for burial, the victorious Confederates placed the black soldiers in a mass grave, and Colonel Shaw with them. 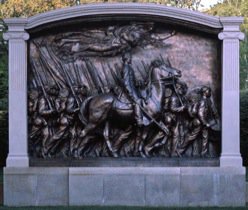 In Saint-Gauden’s sculpture, the soldiers lean forward, ready to break into a run. Their shouldered rifles reach above their heads, creating surging waves of martial ardor around their commanding officer. The overall effect is both urgent and egalitarian. The black soldiers carry as much of the action forward as the mounted Colonel Shaw, and an angel above bestows a timeless, mythic significance to the intense flesh-and-blood realism of the bronze figures.

After hearing of his death and anonymous burial in a mass grave with his soldiers, Frank Shaw, Robert Shaw’s father, wrote to a surviving Union officer, “We would not have his body removed from where it lies surrounded by his brave and devoted soldiers . . . . We can imagine no holier place than that in which he lies, among his brave and devoted followers, nor wish for him better company”what a body-guard he has.” Saint-Gaudens captures this sentiment perfectly, and one is not surprised to learn that, when unveiled in 1897, the monument was wildly popular.

Needless to say, the Met could not transport Colonel Shaw and his men from the Boston Common to New York City. There are, however, pictures as well as bronze studies of the heads of the black soldiers, whose faces feature the look of iron-willed determination characteristic so many of Saint-Gaudens’s figures. It was more than enough to evoke for me memories of Robert Lowell’s “For the Union Dead,” a poem that articulates a great deal of what I felt while viewing the Saint-Gaudens exhibit.

Lowell’s recalls the heroic memory of Colonel Shaw and the heroic sacrifice of the Massachusetts 54th: “Two months after marching through Boston,/ half the regiment was dead.” But the deaths were not futile. Lowell evokes the urgent voices of the past: “at the dedication,/ William James could almost hear the bronze Negroes breathe.” 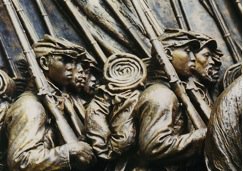 But do we now hear? Can our age live on a diet of heroic memories that claim our imaginations? Lowell thinks not, and he writes of their present state: “Their monument sticks like a fishbone/ in the city’s throat.” Of Shaw Lowell continues, “He is out of bounds now. He rejoices in man’s lovely,/ peculiar power to choose life and die.” Perhaps we hear his voice and the martial clatter of his men’s boots, but we no longer respond with inward affirmation. As the poem continues, Lowell leaves the Shaw Memorial behind and reminds his readers of the countless cold grey granite monuments on the many small New England town greens. I’ve been to many myself, often remarking inwardly that so many young men with the same last names died, brothers in the same ill-fated regiment. These small-town memorials lack the artistic genius of the Shaw Memorial. Nonetheless, the simple stone obelisks bespeak a grief intertwined with pride, a combination that Lowell rightly recognizes as increasingly inaccessible.

First published in 1960, Lowell wrote “For the Union Dead,” at least in part as a reply to Alan Tate’s “Ode to the Confederate Dead.” He wanted to claim for New England a piety and tradition of honor equal to its Southern counterpart”indeed superior because morally just and unsentimental. Yet the poem ends on a sour note. Lowell recognizes that no monuments are now being raised “for the last war.” He evokes American atrocities rather than victories (“Hiroshima boiling”), the shame of racial discrimination (“the drained faces of Negro school-children), and the anodyne crudities of consumer culture (“giant finned cars”). Indeed, perhaps there should be no monuments. 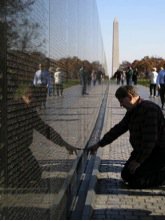 After all”and here Lowell is turning toward the spirit of the 1960s, speaking as the voice of liberal elite culture”why build monuments when America (Or is that spelled Amerika?) has nothing to be proud of.

Lowell was prophetic. By and large, our contemporary liberal elites are profoundly uncomfortable with heroic images of America. The Vietnam War Memorial designed by Maya Ying Lin encourages an intimate contemplation of the human costs of war. To find a name on the wall brings one, for a moment, into an intense personal communion with the singular reality of a life sacrificed on the battlefield. It is a possibility that thankfully puts the bitter political and ideological conflicts of the 1960s into the very distant background, which is why the monument has been rightfully celebrated.

Yet the loss of a public dimension is telling. The American ideals so vividly present in the public art produced by Saint-Gaudens (and so many others in the late nineteenth and early twentieth centuries) are entirely absent. True enough, the World War II Monument tries to recapture American confidence. But the spirit of critique and the general drift toward irony in recent decades cuts against classical columns, bronze eagles, and Lady Victory crowned with laurel.

Today, I sincerely doubt that the City of New York could raise a monument to General Sherman. Protestors would gather to denounce him as war criminal. Christopher Columbus? An agent of imperialism and genocide. Thomas Jefferson? A hypocritical slaveholder. Can anyone imagine a monument that tries to capture the single most important American achievement of the last fifty years”our Cold War victory? Impossible.

Well, maybe not impossible. Saint-Gaudens was an immigrant. He was part of the surging flood of humanity that continues to irrigate and renew American culture. Perhaps it is not unrealistic to hope that our present, deracinated elites will be eclipsed by men and women who have not become gouty with complacent disdain for patriotic pride.

No, not unrealistic at all. Someday, a young man named Gonzalez or Rodriguez or Chou, the Colonel Shaw of our future, will be buried in Arlington cemetery, and his father will both weep tears of loss and at the same time think, in his own way and in his own words, what Walt Whitman once wrote America:

In many small ways, I’m sure that this renewal of the heroic American imagination is happening even now.

R.R. Reno is professor of theology at Creighton University .