There could be no starker”or more revealing”contrast than the exhibitions at London’s major museums this winter: “Pop Life: Art in a Material World” at Tate Britain and “The Sacred Made Real: Spanish Painting and Sculpture 1600-1700” at the National Gallery. The works they show come not merely from separate times and places but also from separate minds. These are not art shows so much as windows into two entirely different ways of understanding reality.

“Pop Life” presents the argument that reality is at root material and it is up to us to make the most of it. “The Sacred Made Real” portrays a world in which the material is a stepping stone or a promise of something beyond what we see. In one, we are the measure of all things. In the other, we are part of something much larger than ourselves.

The sociologist James Davison Hunter has argued that”from entertainment, sports, and literature to family customs, fashion, and architecture”we live in an increasingly thin culture. I think of a film of ice on a lake so fragile that it breaks at the slightest touch. What can sustain us through suffering, loss, aging, and death? There is nothing to catch us when we fall. Thick culture is, instead, like the ice you see in a Dutch Master’s painting of canals in winter. Skaters fly across ice formed by freezing temperatures, adding first one layer, then another and another. Sliced, it would be feet deep. It won’t break when we fall.

A thick culture, in other words, provides a foundation for the challenges of our lives: for building friendships, marriages, and commitments, for facing loss, suffering, and even death. The art on display at these two London museums shows clearly the different worlds created by thin and thick cultures.

“Pop Life” is a retrospective on Pop Art, the forms and ideas most often associated with Andy Warhol, whose work opens the exhibition. The thesis of the exhibition is that younger artists, many of whom knew Warhol, took the cue for their work from his quip that “good business is the best art.” The show examines graffiti artist Keith Haring’s Pop Shop, which opened in New York in 1986 and closed 2005. It includes Tracey Emin and Sarah Lucas’ The Shop of 1988, and Cosey Fanni Tutti’s art life in prostitution, and Andrea Fraser’s 2003 work “Untitled” in which she has sex with a collector for $20,000. Originally, it had Richard Prince’s photo of a 1975 Gary Gross photo of ten-year-old Brooke Shields naked but with her face made up like an adult, but the London police removed it as pornographic.

Along the way, the show adds Damien Hirst’s September 2008 Sotheby’s Auction “Beautiful Inside My Head Forever,” which gleaned him 11.5 million Pounds, together with Takashi Murakami’s giant “superflat” sculptures of anime heroines and his made-for-the-show video of Kirsten Dunst as a Japanese otaku princess. 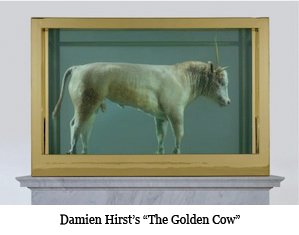 The images eventually grew into their own show, which opened at the Sonnabend Gallery in New York in the fall of 1991. It was not much of a hit (and the idea of a film never came to anything), but the news reports did catapult Koons into even greater art stardom. “Made in Heaven,” which has its own room in the Tate’s “Pop Life” exhibition, includes paintings of Koons and Cicciolina having sex in a variety of ways and places, polychrome (colored) sculptures of the pair, a glass sculpture that parodies the pieta, a white marble sculpture of the two looking longingly into each other’s eyes, and images of lush flowers speaking of fertility.

Koons has insisted in interviews that his work is an exercise in self-acceptance both for himself and for his audiences. The guide to the Los Angeles Museum of Contemporary Art’s 2008 show about his work, for example, quotes the artist saying that when he saw Masaccio’s “Expulsion from Paradise” in the Brancacci Chapel in Florence, he was “moved” by the shame and guilt on their faces. Koons responded by wanting to do “a body of work that is kind of about after the fall, but all of this guilt and shame is removed.” Elsewhere the guide says that because the couple is not ashamed of their sexuality they have declared themselves “heavenly.” Sex has, in its way, become religion. Koons himself is quoted: “ To be able to find more meaning in life is to be able to accept one’s own sexuality. When I speak about sexuality, it’s really at the core of one’s self-acceptance.”

In 1986 he told Klaus Ottman of the Journal of Contemporary Art that he wanted to “help the underdog” by “showing concern and making psychological and philosophical statements” for them. Interviewed by Artinfo ’s Robert Ayers in April 2008, he said: “For me art has been about living to my full potential and about having viewers increase theirs.”

The artists of seventeenth-century Spain would hardly know what he was talking about. The notion that the role of the artist had anything to do with the artist’s own fulfillment or the self-acceptance of his viewers would have been unintelligible to them. Artists, they thought, were skilled craftsmen, who, unlike Koons, dirtied their hands making their works. Their goal was to communicate something, unlike Koons, beyond themselves. In a biography of the sculptor Juan Martínez Montañés”known in his time as el dios de la Madura : the god of wood”the eighteenth-century commentator Antonio Palomino tells how Montañés, upon seeing one of his works in a sacred procession in Seville, said it was “impossible” that he could have created such a marvel. Elsewhere Palomino explains that Vallodolid sculptor Gregorio Fernández prayed, fasted, performed penance, and took Communion before beginning a sculpture of either Christ or his Mother “so that God could confer his grace on him and make him succeed.” Success was self-transformation, not self-acceptance.

Visitors to “The Sacred Made Real” at the National Gallery step into rooms filled with paintings and sculpture of high realism, so graphic you think they are often about to speak or that you have somehow walked into private moments of contemplation or pain. But the realism is not in service of the self; it is in the service of bringing the viewer closer to the divine. In the wake of the Reformation, such Catholics as Teresa of Avila and her protégé John of the Cross advocated a new piety based on contemplation. In 1563 the Council of Trent affirmed the use of sculptural images, and John of the Cross wrote that this was done so that “we may reverence the saints . . . and that the will may be moved and devotion to the saints awakened by them.” Or, as reviewer Brian Sewell put it in the Evening Standard , “These were not artists engaged in intellectual enquiry . . . . Instead with startling realism, they sought to convince the Spaniard of his faith.”

Viewers of the National Gallery show are greeted first by the severed head of John the Baptist, bleeding esophagus on full view. Francisco de Zurbarán’s “Christ on the Cross,” mistaken for a sculpture when it was first viewed in a monastery, parallels Montañés’ “Crucifixion.” At the time the relation between painter and sculptor was tightly controlled: Only members of the carpenters’ guild could carve; only members of the painters’ guild could polychrome (color) the works. Diego Velázquez himself trained in the workshop of Montañés’ partner, Francisco Pacheco, who also became the younger man’s father-in-law. In both the “Crucifixion,” done with an unknown polychromer, and in Fernández’s “Ecce Homo” and “Dead Christ,” the suffering is potent. Blood oozes out of cuts, skin is torn open, limbs are blue with death.

But such gore is not the only theme here. Contemplation demands realism as well, whether it’s Pedro de Mena’s “Virgin of Sorrows,” tearful over her son’s death, or his ecstatic Francis of Assisi. Based on the story that in 1449 Pope Nicholas V opened the tomb of the saint, dead two hundred years, and found his body in perfect condition with a look of delight on his face, this work appears here outside its home in Toledo’s cathedral for the first time. Near the end of the show Mena offers one last surprise”Mary Magdalen, dressed in rushes, her broken-hearted gaze fixed on the Cross. Writing in the Guardian , the reviewer Adrian Searle said: “I have witnessed a woman consumed by grief, and she looked like this.”

Koons’ close-ups of his and Ciccolina’s various body parts”and those parts in various, if hardly inventive, positions”did not seem to inspire the Tate’s viewers to reflect on the transcendence or ecstasy of erotic love. Most, once they got past the warning sign that there were images you might not want your small children to see, looked quickly and went on to the next room. Either their self-acceptance wasn’t much enhanced by the images or they didn’t find much to contemplate. Reviewers called the show “buzzy,” “theatrical,” “more of a blast than expected,” “fast art, nothing to detain you for long.” Trying to turn sex sacred isn’t exactly new, and it ends up making sex nothing”done in high realism, in every possible medium, even the material comes to seem unreal. In “Made in Heaven,” you don’t even get what you see.

But the artists on display in “The Sacred Made Real” bring the sacred into our world. The grief-stricken Magdalen contemplating the Cross, the Christ of the “Ecce Homo,” and the “Virgin of Sorrows” were not alone”for the display was crowded, and the visitors were in no hurry. I watched as a woman in her early forties meditated on the face of the “Virgin of Sorrows.” The woman’s gaze was not a blank stare, eyes glazed over. Something was going on inside her, something private. She was engaged. 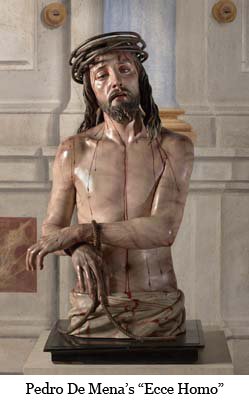 Or, take the penetrating eyes of the “Ecce Homo,” Jesus’ body bleeding, anguished in its coiled stance. One viewer was convinced the sculpture caught the moment when Christ looked into the eyes of Peter as he denied Christ for the third time. Or, consider Alonso Cano’s “Saint John of God,” a head with scruffy beard, eyes focused but not on anything visible in front of them but on something inside and simultaneously beyond.

People weren’t bored at the National Gallery’s show. They stayed to look at the art and at themselves. These works, many still objects of veneration in Spain, take viewers to a dimension beyond the immediate, the long view. As Searle wrote: “There is so much more to say and think about here, whatever one believes, or whatever belief one feels estranged from. Painted or sculpted, these are real presences. I left devastated and deeply moved.” Here you get more than what you see.

Taken together “Pop Life” and “The Sacred Made Real” raise questions about the role of art and the artist in any society at any time. But mostly they give us glimpses into the hearts of two very different cultures”a thin one, and a thick one. Perhaps that is their most lasting, if unintended, consequence.

Roberta Green Ahmanson is the chair of the board of the Museum of Biblical Art in New York and co-editor of Oxford University Press’ Blind Spot: When Journalists Don’t Get Religion. She lives with her family in Southern California. She and her husband, Howard Ahmanson, helped sponsor “The Sacred Made Real,” but they neither derive financial benefit from nor own art whose value will be increased by the show. The chance of juxtaposing the show with “Pop Life” was entirely happenstance.