The Satin Slipper , the ambitious second installment of The Paul Claudel Project by The Storm Theatre and Blackfriars Repertory Theatre, makes no pretense about being anything but epic in scope. The audience is told at the very beginning that “the scene of our play is the world,” and that comprehension of everything being played out on the stage will come slowly. The themes are complex and the poetic language is dense. The genius of Peter Dobbins’ production is that he manages to give this epic play a beautifully intimate home, allowing the audience to grapple with the spiritual content of The Satin Slipper on an accessible human plane. 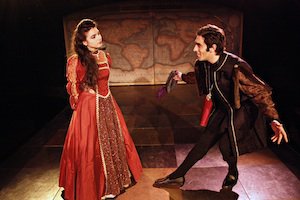 The Satin Slipper (or The Worst Is Not the Surest) was originally nine hours long, although Claudel cut it down to four hours and forty-five minutes for its world premiere in 1943. For this New York premiere, sixty-seven years later, Dobbins cut the script to a running time of just under three hours. Set in the Golden Age of Spain, and taking the audience to many different continents, the plot ultimately revolves around a young woman, Dona Prouheze (played by Meredith Napolitano), and the men who love her.

The audience is first introduced to her much older husband, Don Pelagio (Ross DeGraw), who, although seemingly resigned to the limits of his marriage, still desires faithfulness from his young wife. For Don Pelagio, marriage is about consent freely given more than it is about love. We next meet Don Camillo (Christopher Tocco), a brash young man who is refreshingly blunt about his fixation on Dona Prouheze. His interest is not diminished upon rejection. For Don Camillo, love is bold, if not appropriate, desire. Finally, the audience is introduced to Don Rodrigo (Harlan Work), who has actually won our heroine’s affections. Cannily, Claudel rarely puts his two main characters on stage together, allowing their growing anticipation of each other to palpably affect the audience as well. Rodrigo speaks of Prouheze’s perfect “essence” after the audience has already been allowed to see her flaws. Their mutual longing for their absent soulmate enables the audience to see their love as a partial illusion, a dream of what might actually be real.

This complex love story is laid out amongst political intrigue and the worldly dreams of conquering new territory, which keeps it tethered to the ground; but it also lives within the spiritual framework of the Catholic faith. Through Dona Prouheze’s appeal to the Virgin Mary to stop her from giving into temptation, and appearances by characters such at St. Teresa of Avila, St. James, and Prouheze’s guardian angel, the nature of the characters’ struggles are lifted up as a meditation on divine and human love. Throughout the play, the themes of the nature of freedom and joy, pleasure vs. sacrifice, the confinement of the human body, and the longing for peace thread their way into a compelling story about the trappings of human desire.

This production is The Storm Theatre’s first in its new home in The Theatre of the Church of Notre Dame, a wonderfully intimate basement space of which Dobbins takes full advantage. Staged in a runway style, with the audience facing each other on two sides of the stage, the minimalist set (designed by Ken Larson) is dominated by a map of the world, and only occasionally enhanced by set pieces to indicate a particular location. A black curtain that beautifully brightens into a starry night sky encloses the stage and the seating area, enabling the audience to feel a part of the same universe that the actors inhabit. The gorgeous period costumes (designed by Laura Taber Bacon) add to the visual beauty of the production, and the lighting and sound designs (created by Michael Abrams and Amy Alta Donna respectively) help elevate the production onto a more ethereal plane. 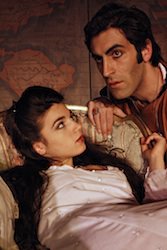 On the whole, the acting is solid, and most of the cast makes full use of Claudel’s poetry and rich imagery. Erin Beirnard, a veteran of The Paul Claudel Project having recently appeared in The Tidings Brought to Mary , navigates her way through multiple roles as Dona Musica, The Moon and The Gleaner Nun with appealing sincerity and ease. Dinh Q. Doan provides some much needed comic relief as Isadore and The First Soldier, and Cheryl Burek, as St. Teresa of Avila, frames the production beautifully with her haunting voice and serene presence. Harlan Work is very compelling as the tortured Don Rodrigo, bringing the audience along for the ride of his struggle for love and, ultimately, redemption. But the cast’s real find is Christopher Tocco, whose comfort with the density of the language is remarkable. His intensity and conviction as Don Camillo infuse the play with an arrogant energy that is able to plumb the nuances of each scene in a manner that addresses both his character’s profound humanity and his reluctant pull toward something greater.

The Satin Slipper is not an easy play. It is long (even with the liberal editing), unabashedly religious in its themes, and does not offer any easy answers. But Peter Dobbins, The Storm Theatre and Blackfriars Repertory Theatre have nonetheless created an incredibly compelling piece of theatre, with an artistry that does justice to the play’s lofty themes. There is a stunningly beautiful moment in the second half of the play, in which Dona Prouheze kneels on the ground, having been allowed a glimpse of her beloved Rodrigo, who is actually a half a world away. Her guardian angel stands behind her, while the object of her desire appears in front of her, and the light hits her in such a way that two shadows of her kneeling form appear on either side. The duality of mankind is captured in this moment, with the spiritual and the earthly pulling Dona Prouheze in two directions. It is to the credit of both Claudel and Dobbins that both angles are allowed room to breathe and make their argument within the production. Just as the audience is warned from the very beginning, understanding of the play will not come right away, but Dobbins and his talented cast and crew make sure that coming to that understanding will be well worth the effort.

The Satin Slipper is playing at The Theatre of the Church of Notre Dame through February 6, 2010. Performances are Thursdays through Saturdays at 7:30 p.m. and Saturdays at 2 p.m.