Life is full of delicious”and sometimes not so delicious”irony. If there is a “white” man in this country who could have been expected to vote for President Barack Obama more than the “white” man who is writing this, it is difficult for me to imagine such.

For more than forty years, now”ever since, as a barely-wet-behind-the-ears high school teacher, I went south, in the summer of 1969, to North Carolina Central University for an National Defense Education Act (NDEA) teachers’ institute on African-American history and literature”I have been involved in teaching, researching, writing, and speaking about, in a host of public program venues, the journeying into the African-American ancestor world that I take my college students on each semester. Our nation has set out, in special ways, on this ancestor journey every February since the “Father of Black History in the Twentieth Century,” Dr. Carter G. Woodson, decided”in the 1920s, during the bleakest of times for black Americans”that there should be a national week devoted to such ancestor journeying, and that it should be placed between the birth dates of the two most consequential of our ancestor voices, Abraham Lincoln and Frederick Douglass.

February, as Black History Month, is a good time to turn to the ancestors for a wisdom hard bought and of inestimable value.

All this journeying to, studying about, teaching, observing, listening to, learning from, writing, and speaking about our nation’s black ancestors pushed me, in urgent ways, toward being a voting contributor to and celebrator of the special Barack Obama moment that has made him the first African American to hold our nation’s highest office. By email early on the morning after our historic election, I received a beautiful note from a beautiful former student. It included these words: “I never dreamed in my lifetime that this could have happened . . . . All the pioneers who sacrificed for our cause are no doubt rejoicing tonight . . . . I wish I could be in your class to see if your students realize just what occurred tonight. Realizing what a giant step we made as a nation tonight. Now we must pray that Obama will be able to do some of the things that he has promised. That this trust and belief that we have given to him, he will not let us down.”

The problem, for me, is that my education included something that, apparently, my students’ doesn’t. I appear to have been taught something, in the deepest of ways, that seems no longer operative in our political life, where we cut and trim and compromise and rationalize in what we think are our own best interests, and that seems increasingly less operative in the education we give to our children. I was told, in so many ways across my bringing-up years, that under all circumstances I should hold human life to be a sacred gift from God”that our bodies are (how quaint and odd a thing to say today) the “Temples of the Holy Ghost.” Respect for human life is the fundamental law that brooks no compromise. It is the line never to cross.

Looking back at when the joy and sureness of youth protected me from worrisome musings, I was less sure, in specific terms, than I am today about what that “fundamental, no crossing the line” respect for human life might mean. As I measure things now, in the approaching twilight of my years, I have come to see in those youthful lessons that the teaching that life is a sacred gift from God is where my love of life today”in all of its wonder and craziness and, yes, even awfulness”has it base, its roots, its grounding.

“Treasure life!” is what I hear and feel from deep down inside of me. Celebrate life in birthdays, in dazzling sunsets and sunrises, in the beautiful colors of fall”and in the hugs and kisses with the lady I love, the children we have reared together, and the grand grands those children have given us. Oh, yes”and in good conversations, and talk about baseball and history, and long, wonderful, hazy, crazy days of summer on the beach”and in the wonderfulness of walking a golf course with good friends.

All that affirmation”and so much more”will always be there because its roots go deep into a childhood and a “good” education that warns me, if I dare consider thinking otherwise, that I can never be a part of denying that love and that life-affirming possibility to anyone else, no matter how hard I (or you, or anyone) might think that person will have it”or how hard you might think that person’s addition to the “Temple of the Holy Ghost” ranks might make it for you.

A persistent voice sounds a warning that demands to be heeded: Never side with those who do cross the line. That “never side” warning was deepened as I studied and read and taught and wrote about so many places in history where an awful price was paid by those who were categorized and denied”and by those who did the categorizing and denying.

Newsweek editor Jon Meacham, to candidate Barack Obama, at the Democratic Candidates Compassion Forum, April 13, 2008 : “Senator, do you personally believe that life begins at conception? And if not, when does it begin?”

Senator Obama : “This is something that I have not, I think, come to a firm resolution on. I think it’s very hard to know what that means, when life begins. Is it when a cell separates? Is it when the soul stirs? So I don’t presume to know the answer to that question. What I know, as I’ve said before, is that there is something extraordinarily powerful about potential life and that that has a moral weight to it that we take into consideration when we’re having these debates.”

But, Mr. President, your “potential” is our “real.” And wasn’t that “real” true on the most personal levels for you, too? Were you only “potential” in your mother’s womb, becoming “real” only after your ninth month, outside the womb, when you were as dependent on the support of your mother as you were through your first nine months of life inside her womb? If your potential could be aborted inside the womb, why not outside as well?

All I could do at the moment when it became clear who had won the presidency, and all I can do now, in this month of listening to ancestors, is to shake my head and wonder over the surprises life holds for us and pray that our president will not be able to do all the things he has promised”that, instead, what his model of a president, Abraham Lincoln, referred to as “the better angels” of our shared, flawed, and limited human nature will prevail. 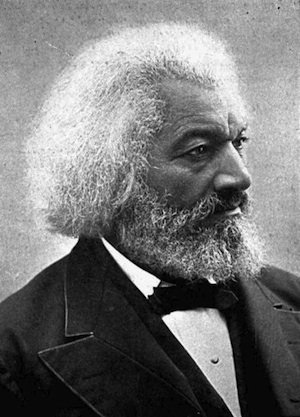 Among those better angels are our Black History Month ancestors, “all the pioneers who have sacrificed for our cause.” And so, like my beautiful student, I, too, now turn to her ancestors, who are our president’s, too”and who I think I have the right to say are mine, as well”to find the sustenance I need in what, for me, are troubled waters.

In May of 1857”in the aftermath of the awful Dred Scott decision that distorted the Constitution by finding legal justification for the institution of slavery”one of the most notable and revered of the ancestors took to the public platform to take issue with the recent Supreme Court decision. In a powerful philippic, Frederick Douglass asserted that “not what Moses allowed for the hardness of heart, but what God requires, ought to be the rule.” The Constitution, he went on to say, “knows all the human inhabitants of this country as ‘the people.’ It makes . . . no discrimination in favor of, or against, any class of the people, but is fitted to protect and preserve the rights of all, without reference to color, size, or any physical peculiarities [emphasis added] . . . . When this is done, . . . liberty, the glorious birthright of our common humanity, will become the inheritance of all the inhabitants [emphasis added] of this highly favored country.” 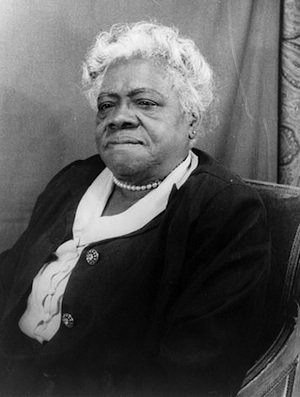 A half-century and a bit more after Frederick Douglass’ demanding words were realized in the highest law of the land, in the constitutional revolution of the Thirteenth, Fourteenth, and Fifteenth amendments to our governing document, another strong ancestor voice told us that she was her “mother’s daughter, and the drums of Africa still beat in my heart. They will not let me rest while there is a single Negro boy or girl without a chance to prove his worth.” The great educator Mary McLeod Bethune did her best, through a long lifetime of providing opportunity to her boys and girls, to make that statement a reality in far more ways than anyone could have imagined when she issued it as a sacred promise.

So what are we are left with as we watch our president take us into uncharted waters, steering the ship of state in directions that some of us can only recoil at? Ours is a faith tradition that says, “Argue against the wrong act itself, especially so deep a wrong as happens when one champions the abortion option”a wounding wrong for the baby killed, and a wounding wrong for the mother who chooses death rather than life.” This is the kind of “religious” thinking that once was labeled as the “opiate of the masses.” Today it has been replaced by an opiate that says, “Do whatever you think you need to do for yourself and for the little one you carry in your womb, even if it means killing that little one whom you couldn’t possibly support in the way you should support him or her. Because, you see, there is nothing more than this life, and certainly no final judgment to be made about the doing we do here. Our destination is simply a hole in the ground”or ashes scattered to the winds.”

But we are also left with the ancestors”with the great Frederick, and the indomitable “Ma” Bethune, and the angry Bishop Henry McNeil Turner, who, in 1889, a time when despair easily could have been embraced, told us “to wait and pray, and look for a better day, for God still lives and the Lord of Hosts Reigns .”

And so, finally, we can only sing”especially in this month of celebrating the struggle through bleak times to today’s promise on our nation’s racial front of “thank God Almighty, free at last””as our ancestors would have wanted us to sing and as our brother Martin and our sisters Fannie Lou and Rosa told us to sing. We can only sing that deep in our hearts, we do believe; and that we all”those who stand where we stand on what, for us, is the central civil rights issue of our day, and those, as well, whom we dearly love but who stand someplace else”that we all, someday, in spite of all our differences, will stand together where our common destination lies, and where love, indeed, will prevail. On that day, pray God, we, all together, shall have overcome and finally shall be “Free at last! Free at last! Thank God Almighty, . . . free at last.”

Dr. Lawrence D. Hogan is senior professor of history at Union County College, Cranford, New Jersey. He is the author of A Black National News Service: Claude Barnett and the Associated Negro Press, and Shades of Glory: The Negro Leagues and the Story of African-American Baseball.