In the wake of sudden disaster, the question of God’s goodness and justice comes into sharp relief. 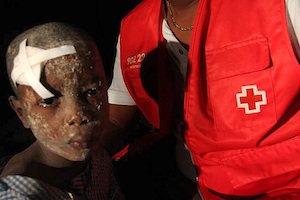 Times of intense suffering, both collective and personal, cause the problem of evil to resurface. Amid the smoke and ashes, the perennial questions of theodicy ascend with theological and existential urgency: “Why does God allow evil”? “Where is God”? “Has he abandoned us”? “Does God see the ruin?” “Does he hear our cries of despair?” These moments of crisis call for theological agility and sensitivity. Sadly, however, Christian leaders and theologians often stumble and fall short in the aftermath of tragedy. We fumble and we freeze, baffled by the spectacle of evil and paralyzed by its theological recalcitrance. Instead of responding with sound and sophisticated reflections, we dart hasty and ill-conceived platitudes at best and hurtful and offensive remarks at worst. Theology”and theologians”must find ways to speak constructively and helpfully in these moments of doubt and despair, even when we know that words fall short.

On Tuesday, January 12, 2010, Haiti was devastated by a 7.0 magnitude earthquake that leveled buildings and killed hundreds of thousands of people. In the coming months, as the death toll continues to rise from disease, violence, and deprivation, the people of Haiti and the watching world will continue to ask, “Why?” As I will suggest momentarily, the more imperative question in the immediate aftermath of tragedy is not “why” but “what””that is, what can we do to alleviate the suffering? And yet, we should not dismiss the problem of the plausibility of God’s existence and character in the face of horrendous evils. Christian responses to these questions are called theodicies . Here, I define theodicy not as a solution to the problem of evil (that would be a fool’s errand) but, rather, as a theologically sound and spiritually edifying response to situations of suffering.

Theodicy, as a way of trying to make sense of the inexplicable, begins almost immediately after tragedies occur. Unfortunately, rather than illuminating the problem or providing comfort and hope, theodicy often degenerates into “blaming the victim.” On the same day as the earthquake in Haiti, Pat Robertson, a prominent American television evangelist and longtime host of The 700 Club , blamed the earthquake on the Haitians themselves, who, he claimed, swore a pact to the Devil in order to gain their independence from the French. Since then, he argued, they have been “cursed.” The reactions to Robertson’s insensitive, irresponsible, and theologically pernicious comments were immediate and widespread. Even the White House felt compelled to comment, rightly denouncing Robertson’s position as “stupid.” What do we make of Pat Robertson’s theodicy?

We must realize that because many people listen to and value Pat Robertson’s opinion, we cannot allow his theodicy to stand unchallenged. First, his factual claims are dubious, to say the least. How does he know that the Haitians made a pact with the Devil? How exactly did they consent to this diabolical agreement? Did the Devil appear among them with a contract that they collectively ratified? It is, quite simply, utter and total nonsense. Second, even if we were to concede to possible shady spiritual dealings, why should present-day Haitians suffer punishment for the sins of their ancestors? God does not punish us for the sins of our fathers, after all (see, for example, Ezekiel 18:20). Moreover, Pat Robertson’s theodicy rests on a theology of divine cruelty, wrath, and vengeance”on a God who brutally punishes scores of innocent people with indiscriminate and disproportional suffering.

A sound theodicy must meet three criteria: It must draw from the distinctive resources of its tradition; it must be intellectually, spiritually, and theologically coherent; and it must make sense in the face of real situations of suffering. Pat Robertson’s theodicy does not find persuasive biblical justification. While some biblical passages speak of divine retribution for sin, these passages do not equate natural disaster with punishment. Rather, the Bible speaks of God’s presence with those who suffer: He calls them “blessed,” not “cursed” (Matt. 5:1“12). Theologically, Pat Robertson’s theodicy fails to express the Christian view of God’s love and compassion, particularly for the poor and disenfranchised. Lastly, Robertson’s theodicy fails the practical litmus test. Does it make sense to say, to the Haitian mother whose four children lie crushed beneath rubble, that their death was the result of God’s wrath?

Theodicies take us on different theological pathways. If we follow Pat Robertson’s theodicy, we find ourselves in a world where natural evil results from moral evil, where God crushes babies for the sins of their distant relatives, and where the bodies lined up on the street exemplify divine justice. I do not want to live in that world. Conversely, if we speak about God’s solidarity with us in suffering, about the mystery of innocent suffering, about the redemptive possibilities of suffering, and about God’s ultimate defeat of evil in the afterlife, we find ourselves in a very different world indeed. It remains a world of sorrows, to be sure, but it is at least a world wherein we may begin to speak intelligibly about suffering. Although theodicy can never adequately explain why the innocent die, it can at least provide meaningful theological frameworks for our questions.

We must diligently avoid the many dangers of theodicy. Robertson’s punishment theodicy illustrates most of them. Theodicy too easily blames the victim, which Robertson does when he calls Haitians “cursed.” Theodicy often overreaches the limits of our reason and theological vision. Robertson’s comments, for example, imply that he has special access to divine reasoning. Moreover, theodicy casts Christianity into a negative light when theodicy espouses vindictive and wrathful theologies. For theology and theologians, silence is often the best option, particularly in the immediate aftermath of tragedy. Unseasonable and unnuanced musings on the reasons for suffering can cause great harm. The teacher in Ecclesiastes reminds us that there is a time and place for everything. For theodicy, there is a time to speak and a time to remain silent. More often than not, we are better to say nothing at all.

Silence, although preferable, must eventually give way to theodicy”not because theodicy solves the mysteries of evil, but because theology must say something . Christians and non-Christians alike ask for theological justifications and explanations for the horrific evils of the world, and we should be prepared to respond. For Christians, the best response, the more imperative question, is not “why?” but “what”: What can we do to help in situations of suffering? Pat Robertson, ironically, is contributing funds to help with Haitian relief. We should do the same. Only after opening our hands should we dare to open our mouths, and even then we should speak with fear and trembling. We should choose pathways in theodicy that cohere with our highest theological ideals and that, above all, make sense to those at the epicenter of tragedy. Only thus do we avoid grave Robertsonian missteps.