“Hard s-f” is a subgenre of science fiction that emphasizes scientific accuracy. Larry Niven and Jerry Pournelle are two of its most successful practitioners. In 1976 they teamed up to write Inferno , a novel that might be characterized as hard fantasy. 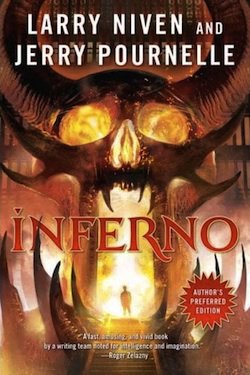 The premise was simple. Allen Carpenter falls out of an eighth-story window and wakes up in the Hell described by Dante Alighieri in The Divine Comedy . Carpenter, a modern agnostic and science-fiction writer who wrote under the name Carpentier, tries to convince himself that he has been resuscitated thousands of years in the future by advanced technology. Eventually, however, he is forced to conclude that his revival is due to the supernatural rather than super science. This sets up the main question of the novel: If Dante’s description of Hell was literal and precise, what is the purpose of Hell, and what does the existence of Hell say about a God described as compassionate and forgiving?

As Dante was guided through Hell by Virgil, so Carpenter is given his own Italian guide, a somewhat mysterious man known only as Benito. Benito informs Carpenter that there is an exit from Hell, but, just as in Dante’s telling, one first must pass through into Hell’s deepest level.

Like its model, the Niven-Pournelle Inferno is in part a cultural travelogue in which Carpenter and the reader get to meet the famous and ponder their fates. Carpenter runs into Billy the Kid, Henry VIII, and Vlad the Impaler, the real life Dracula. He witnesses the punishment of corrupt environmentalists and real estate developers. And, as in Dante’s version, we occasionally hear the sound of personal axes grinding. Kurt Vonnegut may have a tomb complete with blinking neon SO IT GOES sign because he made up false religions, but it is clear that Niven and Pournelle put him in the sixth circle for different reasons.

Why him? A science fiction writer who lied about being a science fiction writer because he got more money that way. He wrote whole novels in baby talk, with sixth-grade drawings in them, and third-grade science, and he knew better. How does he get a monument that size? . . . If you must know, I was writing better than he ever did before I left high school.

The tortures of the damned in this version are as flamboyant as they are in the original. The difference is that while Dante and Virgil could not be touched by the rains of fire or rivers of boiling blood, Carpenter and his companions have to endure them. They are able to endure because, being already dead, they cannot die again.

Throughout the journey, Carpenter constantly questions the justice of what he sees. On the one hand, even those at first apparently innocent turn out to have been guilty of serious sin. On the other hand, Carpenter finds it extremely difficult to reconcile their guilt with eternal punishment. “How could I worship a God who kept a private dungeon called Hell? That might be all right for Dante Alighieri, a Renaissance Italian! But Carpentier had higher standards than that.”

By this point in the novel, the issue is no longer a conflict between scientific skepticism and religious superstition. It is a question of temperament. When Dante and Virgil traverse the frozen ninth circle, Dante kicks the head and grabs the hair of one of those frozen in the ice. Carpenter is forever saying “Sorry,” even when stepping on the likes of Al Capone or Louis Lepke.

By the end of the book, Carpenter comes to believe he has discovered the purpose of Hell. It is God’s last attempt to get our attention, so we may change our ways and come to him.

Larry Niven conceived the idea to write a sequel to Dante’s Inferno but worried about its theological underpinnings. He felt that the “naïve Roman Catholicism of Dante Alighieri would hardly do for a twentieth-century readership.” Pournelle then suggested that they look at Dante through the eyes of C.S. Lewis. The result was unexpectedly successful. Inferno went through twenty printings and was credited with inspiring renewed interest in Dante among college students as well as providing the impetus for a new printing of the John Ciardi translation of The Divine Comedy . 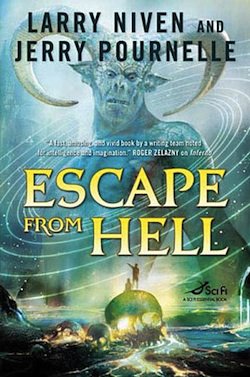 Now, more than a quarter of a century later, Niven and Pournelle have written a sequel, Escape from Hell . They explain that since the first book, “the Roman Catholic Church has made formal changes in its doctrines concerning the necessity of salvation through the Catholic Church alone, as well as a considerable expansion of the doctrine of cocreation.” In fact, the working title for the new book was “Dante meets Vatican II.” The changes provide both the impetus to reexamine Hell and several plot points for the new story.

Benito has ascended to Purgatory. Carpenter has taken his place as guide to anyone who will follow him out of Hell. Only a few take him up on his offer. Some fear being stuck on a lower, more painful level. Others are content, or at least resigned, to being where they are. Albert Camus is one of those who refuse to accompany Carpenter. “I have seen such horrors that no one can endure, yet God does not intervene. If He has the power to stop such monstrous evils and does not stop them, He is a rock! A stone idol, not fit for the worship of free men!”

Carpenter reunites with Billy the Kid. Billy has the job of keeping the violent in a river of boiling blood, a job he clearly enjoys. He insists that the torments of the damned are deserved, but he is nonetheless perplexed by how things have changed in the land of the living.

Went out and shot a bunch of people at the college he was at. Allen, it puzzles me that a man can shoot thirty-two full-grown men and women before the sheriff’s men gun him down . . . . Why didn’t someone just shoot the son of a bitch? . . . Five of ’em were teachers. They had to protect their kids. How could they not be armed? It’s as if someone has been taking away their guns.

In a joke that is almost too obvious, New Orleans lawyers have been recruited by Satan to deal with the changes brought about by Vatican II. “Many doctrines changed. They came close to abolishing the idea of heresy. Ecumenism everywhere. That is why we have to organize for new trials.”

The emotional center of the novel, however, is Carpenter’s relationship with Sylvia Plath, whom we meet first as a tree in the Grove of Suicides. Carpenter restores her human form by burning the tree. (It should be obvious by now that these books have enough physical pain for a Mel Gibson movie.) Plath comes across as a surprisingly sweet woman”able to explain Dante in detail to Carpenter, concerned about the fate of her former husband (Ted Hughes is dealt with appropriately in Hell), and shocked at the very idea of a priest sodomizing altar boys when she learns of the scandals that came to light after her death. She is for Carpenter what Virgil was for Dante: an admirable human being who may not have been ready for heaven but surely deserves something better than eternal damnation.

Any book like Inferno or Escape from Hell risks being dismissed as Dante for Dummies. Authors who set themselves up, even implicitly, to be compared to Dante or Lewis are almost certain to be told they fall short. Furthermore, readers looking for doctrinal purity should remember that Niven and Pournelle are writers of speculative fiction. There is plenty of theology to cavil at for those inclined to do so. Yet the speculation is more restrained and respectful, and vastly more entertaining, than much coming out of the theology departments of putatively Catholic universities. Like a lot of us, Niven and Pournelle are trying to make sense out of Hell. Their tentative conclusions may or may not be convincing. But if all they do is send you back to the original, or convince you to read Dante for the first time, they have performed a worthwhile service.

Robert R. Chase is chief counsel of an Army Laboratory and author of The Game of Fox and Lion and other science-fiction stories.