Just when we were told that the governments and central banks of the world had put the financial crisis behind us, the governments of Europe found it necessary to commit more than a trillion dollars to support of the financial system “ a $962 billion facility to support the weak periphery of the Eurozone, plus an unspecified volume of outright purchases of government bonds by the European Central Bank as well as Germany’s Bundesbank, not to mention an emergency swap facility by which the Federal Reserve will lend Europe all the dollars it requires.

The banking system really was about to come down. The reason is that sovereign debt is a bigger problem than subprime mortgages ever were. We know from available data that two-thirds of the US deficit, according to available numbers, has been financed by domestic as well as foreign banks during the last quarter of 2009 and the first quarter of 2010. This is clear from the Treasury’s data on international capital flows, which shows $50 to $60 billion a month worth of purchases of US Treasury securities from abroad, almost all of it from London or the Caribbean, that is, offshore banking centers. US banks meanwhile are adding Treasuries to their portfolios as fast as they shed commercial and industrial loans. Detailed data is not available on international banks’ holdings of Greek, Spanish, Portuguese or Italian bonds, but we know from anecdotal evidence that the weak sisters of southern Europe have been financed by bank treasuries just as the United States has.

It’s all been done by smoke and mirrors. The governments bailed out the banks in September 2008, and again in various increments through the Spring of 2009. The great Keynesian stimulus that was supposed to guarantee recovery left most industrial countries with government deficits in excess of 10% of GDP. How does the US finance a deficit equal to 12% of GDP with a savings rate of 2.5%? By bank leverage. The banks, once bailed out by the governments, in turn bail the governments out. And when the weaker governments threaten to go belly up, the banking system freezes up.

The cost of insurance against defaults by European banks reached an all-time record for that reason last Friday, and banks stopped lending to each other on the interbank market “ portending an imminent collapse of the financial system. That was not a drill. It was the real thing. And that is why the European governments shifted from official complacency only days ago to total mobilization mode.

The market got a peek at the man behind the curtain. It wasn’t the Wizard of Oz; it was the ghost of John Maynard Keynes. And it didn’t like what it saw.

Keynes assumed that people have a very short-term view of things. If you inflate the currency, the workingman will see the same number of shillings in his pay-packet and spend more, he wrote in the first pages of the General Theory (1936). By the same token, if the central bank reduces the interest rate to zero, investors will shift portfolios to stocks, everyone will feel richer, and consumers will spend more “ which is more or less what happened during the past two quarters of putative recovery in the United States. They won’t mind that government deficits have ballooned to 12% of GDP (or 18% of GDP in the United Kingdom, if unfunded pension liabilities are taken into account).

The fact is that Keynes was right, at least some of the time. Investors tend to focus on the next turn of the market, because professional investors are paid to follow the pack rather than work out what is a worthwhile investment and what is not. Keynes had contempt for investors; as he wrote in 1931, “A sound banker, alas, is not one who foresees danger and avoids it, but one who, when he is ruined, is ruined in a conventional way along with his fellows, so that no one can really blame him.” Every banker in the world had to short the market on Friday, and every banker in the world had to buy the shorts back this morning “ which is why European stock indices are up nearly 10% as of 8:00 a.m. Eastern Standard Time.

The trouble, though, is that the long-term sometimes peeks in. Issuing lots of government debt is a good idea if the economy can support it. The trouble with Europe is that forty years from now, there won’t be enough Europeans to pay the taxes to fund the government debt. Here is a projection of Europe’s dependency ratios from the United Nations World Population Prospects website, assuming constant fertility: 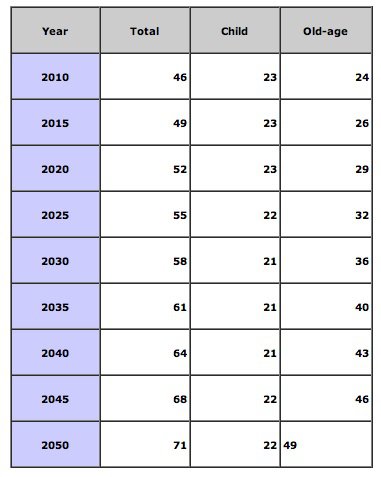 The elderly portion of Europe’s population will rise from 24% to 49% of the total, an insupportable burden. Who would want to buy 40-year European bonds?

This helps us to answer the question: why Greece? First of all, corruption pervades Greek society to the point that to purge it would destroy the social fabric: all political and social relations are premised on corruption. But it is also the case that the population profile of Greece is much worse than the European average. By 2050, the elderly dependency ratio will rise to a frightening 59%, and the Greek state will be hard pressed to meet its obligations under any foreseeable circumstances. 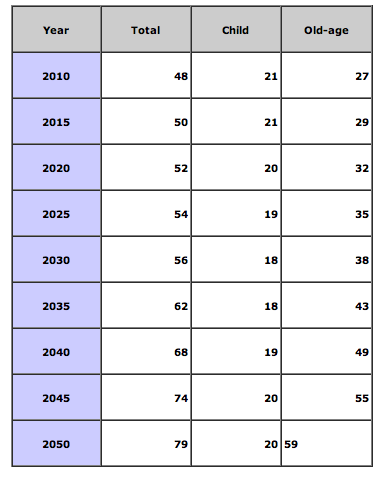 At every inflection point of the financial crash, governments stepped in and announced that they had solved the problem. The crisis began in July 2007; central banks stepped into provide liquidity in August, and the Fed cut interest rates in mid-September . The consensus then held that the crisis was over and that bank stocks were cheap. Then came the Bear, Stearns failure in March 2008, in which the remnants of the firm were sold to J.P. Morgan. Financials briefly soared, and the analyst consensus was that bank stocks were cheap”just before Lehman Brothers’ failure in August 2008. The Bush administration announced a $700 billion bank bailout in September 2008, and financials rallied, before crashing again in early 2009, amidst rumors of a general bank nationalization. More bailouts followed, and this time, an extended rally.

Each bailout requires more leverage, and puts at risk a larger and larger compass of the financial system. The central banks with their combined muscle crushed all the short positions in the market this morning. But time is against them; and now that the market has had a peek behind the curtain, things will never be the same.