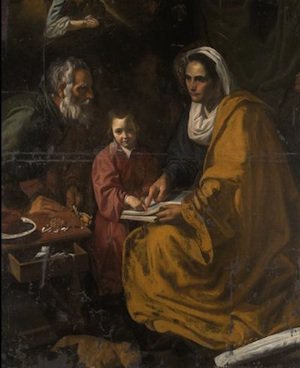 For over seventy years The Education of the Virgin languished in storage at the Yale University Art Gallery. In 2004, curator John Marciari first encountered the damaged painting. But it was not until last summer, after six years of research and scholarly consultation, that Marciari published an article in the journal Ars , introducing the painting to the world and formally proposing the attribution. The Education of the Virgin , he argued, was the work of Diego Velázquez, the great Spanish painter of the seventeenth century.

Following tradition, the painting gives us the young Virgin Mary with her parents, Saint Anne and Saint Joachim. The setting is dark and homely, with a basket of eggs, a drawer spilling its contents, and a sleeping dog. The seated Saint Anne points to a large open book in her lap; Mary also points to the book, but her attention is elsewhere; Saint Joachim approaches in full profile from the left, in the urgent, kneeling attitude of an annunciatory angel.

I found it interesting to compare The Education of the Virgin with Velázquez’ other Marian paintings and paintings of “maids”: especially the little known Adoration of the Magi , from the same early period as The Education ; and Las Meninas which Velázquez painted towards the end of his life.

The strongest objection to Velázquez’ early works is that they are “unresolved,” to use critic Jonathan Brown’s word. The artist attempts too much, piles up effects, crowds unrelated objects together, and shows off his technique. Even where the composition is simplified, individuals strike attitudes, stare into space, brood in profile.

In Adoration of the Magi , the problem begins to be corrected. Peripheral figures remain psychologically remote, but the child Jesus is dramatically present. Held up by his mother, he is entirely attentive to his royal visitors, gazing at them with the bemused solemnity of a real baby.

In The Education of the Virgin , this development accelerates. Now the child at the center of the painting turns and locks eyes with us, who are outside the frame. A whole new level of psychological interaction is achieved, in a painting that both fits and breaks the mold of Velázquez’ early work.

If The Education of the Virgin is a Velázquez, it both integrates what he had already achieved”the painting is at once a religious painting, a scene from ordinary life, and a portrait”and anticipates everything important still to come, namely his long career in portraiture and his late great masterpiece, Las Meninas (1656). Indeed, if the attribution is correct, we have been given a kind of early bookend, a reference point for thinking about Velázquez’ career as a whole. It is as if the hidden end of a long see-saw had arisen out of the past. From a little girl looking out from a painting early in Velázquez career, to a very different little girl looking out from another painting in 1656, Velázquez travelled a long way, and not entirely in a felicitous direction.

When Velázquez left Seville for Madrid in 1623, this early period of his development came to an end. He was appointed painter to King Philip IV and lived the rest of his life at court. As a priest or a religious dedicates his whole life to God, so Velázquez’ whole life from this point revolved around an earthly sovereign. He was as much courtier as artist. When his two careers were in conflict, it was the painter who gave way. As he rose in the hierarchy of the court”from Gentleman Usher to Chamberlain of the Royal household”he painted less and less, and when he painted more, it was because royal portraits were demanded of him.

It sounds melancholy to us, because it is the painter we care for. But Jonathan Brown points out that Velázquez himself had a double ambition. He wanted to be a great gentleman as well as a great painter. Ultimately, he wanted to be a knight, accepted into the ranks of the nobility. But this was an impossibility in the Spain of his time, where painting was still regarded as a manual occupation and anyone who ever painted for money was automatically excluded from the nobility.

Velázquez’ solution to this conundrum was to attach himself ever more closely to his king, his earthly patron, who alone had the power to solve the contradictions of Velázquez’ life. The strategy proved sound. The king delivered the goods in the end, overruling the nobles and appealing to the Pope”twice. Velázquez died a Knight of the Order of Santiago.

This then is the man who, at the end of his life, painted the justly famous Las Meninas : a man yearning to be accepted on an equal, familial footing in the exalted company to which he had devoted his life.

Las Meninas itself is a picture of a painter painting a picture of his king and queen, who stand, in the conceit of the painting, just outside the picture’s frame, and who are also mirrored on a far wall inside it. To say as much is to go far towards explaining the painting’s enormous appeal for modernity, but my point is simply that the tension or contradiction at the center of Velázquez’ life finds expression in this penultimate painting.

On the one hand, the courtier painted the picture to flatter his king. No one supposes that the Princess Margarita’s maids”the Infanta’s meninas ”are the real subject of the painting. Rather, they are emblematic of the posture of the court as a whole. Like servants with their eyes on the hand of their master, the court attends to its king, who, like God, is both absent from the painting and everywhere implied. He is in front of the painting and behind it. He is the air the court breathes and the reason that it exists, and he is also”as Velázquez adapts spiritual attitudes to secular ends”the object of the painter’s recollected, contemplative gaze.

On the other hand, the artist is advancing claims for himself and his art. In a painting about painting, it is the artist himself who is sovereign; it is on his brush that everything depends. In 1656, the king had still not nominated Velázquez for his knighthood”the red cross on the artist’s breast Velázquez would paint in later. In the meantime, Velázquez tacitly places himself on an equal footing with the Philip IV, proposing, in the painting, that he and the king enjoy a relationship of mutual dependency: Velázquez dependent on the king for his livelihood, and the king dependent on Velázquez for his immortality.

The composition of the painting has been called “open,” because its story extends beyond the frame. But it could as easily be called “closed,” because the place normally allotted to the viewer is usurped by the painting itself. In this sense, Las Meninas is a picture of an overweening, entitled world; a world that acknowledges no outside. Going further, we could call it a cold painting of a cold world, painted in a cold palette: silver like the mirror, blue-black and green, with a few splashes of shiny candy-red.

In Las Meninas , we see a mature artist who has psychologically regressed, straining to prove himself”as in his youth”by piling up effects. In the early paintings, the mood was one of exuberant imperfection; in Las Meninas the mood is of calculated perfectionism. The painting is brilliant and universally admired. But is it loved? The remote, preoccupied figures of the early paintings have returned under a darker aspect, and beneath the brave surface of the masterpiece, there is a subtext of insecurity and rejection.

How different is the viewer’s experience of The Education of the Virgin ! In the home of Mary there is no strain, no confusing artifice, and no mirrors. An angel watches over an apparently ordinary domestic scene: A father brings food, and a mother teaches her child from a book. What could be more ordinary? The mother points to a page, and the child points as well, as a child imitates its parent and looks around happily for approval.

Yet Velázquez, employing a method exactly opposite to his method in Las Meninas , uses this natural interaction, to convey what is supernatural. Like grace, the method of the painting builds on nature.

Presumably Saint Anne is teaching Mary from the Hebrew scriptures. Holding a page with one hand, she points to another page with her other hand. Mary, meanwhile, either because she doesn’t need to be instructed (a theological position in Seville) or because she has already learned her lesson, begins immediately to apply what she knows. She looks out at us, not for approval, but in offering. Swimming a little in her rosy gown, overshadowed by the destiny that falls like the shadow across her forehead, she looks out from the prefiguring words with a sweet, fateful gaze, acknowledging and accepting her mission, even as she seems to intuit, in advance, what it will cost.

In The Education of the Virgin , the true sovereign, the Queen of Heaven in embryo, is the maid: the handmaid of the Lord, and by extension, ours as well. If Velázquez, in Las Meninas , used the figure of a little girl to cut the ground from under our feet, in The Education , he uses a little girl to bring us into a realm of absolutes.

In every traditional painting of Mary, excepting paintings of her coronation, she looks at Jesus, either at his infant body or at his broken body on the cross. This is true in The Education of the Virgin as well. In an anticipatory Piet , Mary looks at us, Christ’s broken body. Everyone who stands in front of The Education stands in an absolute relation to Mary, the mother of God and our mother. It is a relationship that is precisely not relative, that transcends time and circumstance.

Velázquez, too, stands in this same relation to his subject. He doesn’t put himself forward, or make special claims for himself or his art. The anxiety and ambition that darkened Velázquez’ life and work in Madrid find their solution in this early, “open” painting that isn’t about merit, but about grace: the grace given to Mary, that she extends to everyone, without exception.

I like to think that at the end of his life, after years of struggling to cement his place at court, Velázquez sometimes imagined a different life than the one he had chosen, in the service of a different patron. Perhaps when he painted Las Meninas , he remembered the little girl he painted in Seville in his youth, and opened a door for himself, if only subliminally, into a realm where she reigns as Queen.

Patricia Snow is a writer in New Haven, Connecticut.

The Education of the Virgin will be on view at the Yale University Art Gallery through February 20.