If you were asked to name the technologies whose proliferation inadvertently threatens the human race, what would you include? Landmines? Assault rifles? Nuclear warheads?

Add this one to your list: the sonogram machine.

The widespread use of sonogram technology”coupled with liberal abortion laws”has made it easier than ever for women to identify the sex of their child so that those without a Y chromosome can be killed before they’re even born. In a speech before the United Nations, demographer Nicholas Eberstadt revealed the details of this frightening trend:

Over the past five years the American public has received regular updates on what we have come to call “the global war on terror”. A no-less significant global war”a war, indeed, against nature, civilization, and in fact humanity itself has also been underway in recent years. This latter war, however, has attracted much less attention and comment, despite its immense consequence. This world-wide struggle might be called” The Global War Against Baby Girls”.

The effects of this war on girls can be clearly seen in the changes in sex ratios at birth. Eberstadt explains that there is a “slight but constant and almost unvarying excess of baby boys over baby girls born in any population.” The number of baby boys born for every hundred baby girls, which is so constant that it can “qualify as a rule of nature,” falls along an extremely narrow range along the order of 103, 104, or 105. On rare occasions it even hovers around 106.

But Eberstadt finds that during the last generation, the sex ratio at birth in some parts of the world have become “completely unhinged.” Consider this graph he provides, showing the provinces in China in 2000: 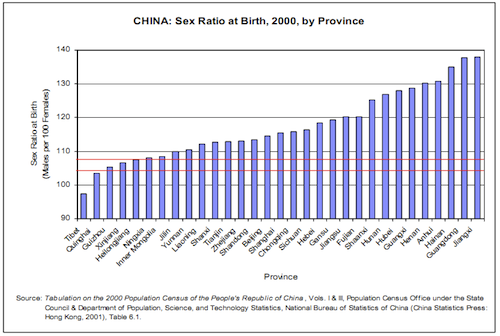 The red lines indicate where the rates should be based on what is naturally, biologically possible. Yet in a number of Chinese provinces”with populations of tens of millions of people”the reported sex ratio at birth ranges from 120 boys for every 100 girls to over 130.

Eberstadt notes that this is “a phenomenon utterly without natural precedent in human history.”

In fact, biologically impossible ratios have been found in various countries around the world, including Armenia, Azerbaijan, Cyprus, El Salvador, Egypt, Georgia, Greece, Hong Kong, Libya, Macedonia, Malaysia, Pakistan, Republic of Korea, Taiwan, Tunisia, Yugoslavia, and Venezuela. There are also numerous countries around the world where the “death rates for little girls, on an episodic or on a regular basis, are higher than those for little boys.”*

What is fueling this crisis? Eberstadt credits the “freakish” ratios to the “fateful collision” between, first, an overwhelming preference for sons, second, the use of rapidly spreading prenatal sex determination technology coupled with gender-based abortion, and, third, the low or dramatically declining fertility levels.

Even if we set aside the moral horror of a world that is killing its daughters, this oft-ignored trend of female feticide could pose a greater threat than many of the high-profile concerns that are touted by the media. Recent analysis by the Canadian Medical Association Journal confirms that in large parts of China and India, there will be a 10 to 20 percent excess of young men because of sex selection”and that this imbalance will have societal repercussions.

Imagine hordes of men, numbering in the hundreds of millions, who will never be able to have sexual contact with a woman, never be able to marry, or never leave a descendant to carry on their lineage. Think about the level of anger and frustration this will generate. Now consider the fact that the number of males fit for military service (ages 18-49) in the U.S. is currently and remains steady at 54 million.

Will we have the sense and the fortitude to act, both domestically and internationally, to avert this disaster? Or will we let our inviolable right to abort baby girls trump our very survival?

The West constantly frets about the alarming levels of global CO2 emissions. But we should be even more concerned about the imbalance in the level of global testosterone. As we will soon realize, changes in our global climate are a minor threat compared to the havoc that will result from the changes in global demographics.

Joe Carter is web editor of First Things . His previous articles for “On the Square” can be found here .

Nicholas Eberstadt, The Global War Against Baby Girls
Science News, The Impact of Sex Selection and Abortion in China, India and South Korea