We have a cardinal nesting just outside our upstairs back door. Step out on the landing and there she is in a bush, not three feet away at eye level. She built it while we were on vacation, otherwise our constant coming and going surely would have discouraged her. It is a nest composed, I note, of eclectic materials but a good part looks like a plastic grocery bag. Recycling has reached the animal kingdom.

This is not a good place to put a nest, and she is skittish. Even a brief glance out the window will send her off. We have taken to skirting the door, sort of ducking below eye-level and slipping downstairs to the walk-out exit so we don’t disturb her. Seems like a stupidly sentimental thing to do, but we like our animals.

Our mated mourning doves on the patio next to the downstairs door, by contrast, aren’t the least edgy when we’re around. Their scraggly-looking nest is also at eye-level, perched on the top shelf of a garden cabinet in the middle of our traffic pattern. This is their fourth year with us, producing three to four broods, two eggs each from March through September. We use the cabinet daily getting things, putting things back, offering a pleasantry or two as we go by. We may be enjoying supper on the patio only a few feet from their nest, and the male and the female will switch off nesting duties without paying us any notice. 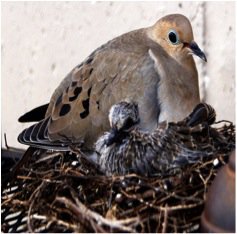 I have given myself permission to stroke their tail feathers while they brood. I would like to say they look forward to my attentions, cooing at the approach of my touch, but they find my friendly overtures unaccountably irritating. This, in fact, is how I discovered a dove will growl low and insistently some little while before lashing out with its beak. Still, they will not budge from the nest. I have never read of growling as any part of a dove’s vocal repertoire. Perhaps I have discovered something new about mourning doves, or maybe my doves are just cranky with me. The annual return of our mourning doves isn’t the thrill of swallows returning to Capistrano, but they are cheery enough for me as winter wanes.

Our other back yard inhabitants have included a red-tailed hawk that stopped by time to time, looking for doves, I feared. Last year, with the nest covered with feathers and my doves nowhere in sight, I thought the hawk had taken the season’s last brood. But I have come to question our gray squirrels. Surprisingly, if other food supplies are short, squirrels will attack nests for eggs and chicks. I have a gained a more measured respect for squirrels.

Our back yard is slightly larger than a postage stamp, covered with seven trees, located square in an urban subdivision. This little domestic forest over the years has been home to rabbit warrens, countless squirrels, fifteen bird species and, for one summer a wood rat”a very well-mannered animal that played well with squirrels at the ground feeder. A possum has ambled through time to time. Around the neighborhood itself we see mobs of crows and, once, three turkey buzzards in the middle of the street devouring a fresh road killed rabbit. I was so startled I stopped the car, backed up the street to our house, and rousted the only kid I could find at home and safaried her to watch the buzzards on the asphalt savannah. The scene wasn’t quite the spectacle of vultures gobbling down the lion’s leftover antelope, but it was nature about as raw as we like around here.

You noticed, right? I call them “mine,” “ours.” Of course they are not mine at all, but when the wild calls we do not always respond well. We want to subject it, or romanticize it, or worship it, but in some way own it so it reflects our desires.

It is a fashion these days to regard animals as downsized versions of ourselves, complete with rich emotional lives, feelings, volition, and individuality. We anthropomorphize “our” animals to tame what is wild and to an extent therefore feared, a reversion to the days when shamans painted animals on the cave wall, calling wild prey to human submission.

But as I understand the Christian view, creation is anthropocentric: The wild, with everything else, was created for Man. But for what? Being God’s creation, the wild is not ours to exploit beyond excess, but neither is it to be worshiped. We are, I would suggest, meant to observe, enjoy, describe and, likely, give an account of what we’ve done with it.

We, says Genesis 1, are to “have dominion over the fish of the sea and over the birds of the air and over every living thing that moves upon the earth,” but I’ve always thought the more affecting Biblical scene exploring the relationship between God, Man, and creation is the “second” creation story in Genesis. It has very little to do with dominion understood as domination. God brings the animals, domestic and wild, to the Man to see what he would name them. The story suggests God had no ready names. God entrusts the Man with co-creativity to discern the elements of creation and describe them.

In my sometimes whimsical take on Scripture, I can see Adam slowly, ever deliberately mulling over first this name or maybe that name and perhaps even another name, while God impatiently taps his foot with growing annoyance.

“Would you get on with it? It can’t be that hard.”

“Alright, hold your horses . . . say, how’s that name for something later?”

“Just tell me what this is.”

“Okay, okay. This is a Madagascar ring-tailed lemur.”

Point is, I guess, Genesis may have said “dominion,” but it works out more like “stewardship.” As we name creation so we equally bear the responsibility of being creation’s voice. Just as we are the only creatures on this planet with knowledge of God, so we also are the only ones who can describe the pain creation endures, the small and countless lives that live with no awareness of death but suffer it nonetheless, groaning”St. Paul’s word”in longing for redemption. As we engage creation, while yet a part of it, we may hope to portray the characteristics of that promised release from pointless entropy.

In which case, us dragging ourselves to the far exit so our female cardinal may nest in peace isn’t so silly, but I hope more like a gesture of esteem.