Based on a report in yesterday’s Bloomberg , the decision by the Obama Administration to require many religious institutions to provide contraception through existing health care plans is bearing electoral fruit: President Obama leads Mitt Romney among women by a remarkable 18-point margin. Though the HHS mandate represents an expansion of government power into the heart of many religious institutions, efforts to resist this expansion were portrayed by HHS Secretary Sebelius as a “war against women,” a label that has stuck and a narrative that the Democratic party during its Convention sought to make a dominant theme of the campaign”it would seem, with considerable success.

We should not let its electoral motivations blind us to the actual significance of the HHS mandate.

The origin of the mandate lies in an impulse that can be dated back to the beginnings of the modern era and the rise of the state. Before the latter’s ascent, memberships in various social settings were overlapping and varied, ranging from families, neighborhoods, townships, boroughs, regions, guilds, Church (parish and Catholic), nation, even empire.

No one was more influential in the definition of the modern state than Thomas Hobbes, who through the conceit of the “state of nature,” portrayed humans as naturally autonomous and individual, with a shared membership solely through one institution”the State. While unitary State sovereignty represented a limitation on our natural liberty in the abstract, in fact it promised a new kind of liberty”liberty from the myriad forms of constitutive identification and membership in non-state institutions, especially the Church.

William T. Cavanaugh describes in his excellent study of the rise of the modern state, Migrations of the Holy , how Hobbes’s new arrangement promised liberation, not oppression:

For Hobbes, the individual was not oppressed but liberated by Leviathan. In his view, the State is not enacted to realize a common good or a common telos , but rather to liberate the individual to pursue his or her own ends without fear of interference from other individuals. In the peculiar new space created by the state, the individual members do not depend on one another; rather, they are connected only through the sovereign”as spokes to the hub of a wheel.

The rise of the state hinged on the promise of liberation of the individual from the constitutive constraints (as well as rights and liberties) of non-state organizations and institutions. The state acted as liberator of an oppressed humanity; its power, concentration, and extent increased as a necessary counterweight for the control of non-state institutions. Thus, Robert Nisbet wrote in his classic work The Quest for Community , “The real conflict in modern political history has not been, as is so often stated, between State and individual, but between State and social group.”

The only liberty that could be recognized was the liberty of individuals to “pursue his or her own ends.” The ancient rights, privileges, immunities and liberties of institutions ”the Church, universities, guilds, localities”were redescribed as forms of oppression . The increased power, even intrusiveness, of the state, was justified not as a form of oppression, but rather in the name of liberation of the individual. The protections against distant, abstract, and impersonal forms of power, understood to be protections of local liberty, were dismissed as parochial limitations and antiquated restrictions. As Lord Acton accurately described in his History of Freedom ,

The modern theory, which swept away every authority except that of the State, and has made the sovereign power irresistible by multiplying those who share it . . . condemns as a State within the State every inner group and community, class or corporation, administering its own affairs; and, by proclaiming the abolition of privileges, it emancipates the subjects of every such authority in order to transfer them exclusively to its own . . . . It recognizes liberty only in the individual, because it is only in the individual that liberty can be separated from authority, and the right of conditional obedience deprived of the security of limited command.

As Hobbes’s illustration to the Leviathan so eloquently depicted, an increasingly “liberated” citizenry, resulting from the diminishment of constitutive memberships in social groups and associations, would be connected only through one bond, one relation, one connection”the state. 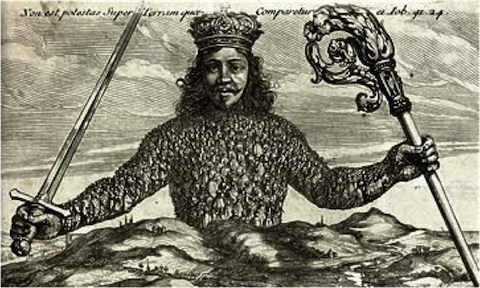 Austrian legal theorist Eugene Ehrlich perceptively observed, “After the associations into which individuals have been placed as members of society have been dissolved and destroyed, the only connecting links that remain between the individual and society are ownership, contract, and the State.”

This ambition has informed Obama’s candidacy from its first days to its recently concluded convention. The early campaign advertisement “Life of Julia” depicted its subject as a thoroughgoing dependent upon the assistance of the federal government who is otherwise bereft of human company (except, briefly, for a child named Zachary who ceases to be a presence in her life shortly after he enters public schools).

This picture of a radically individuated human being gave rise to the observation during the Democratic National Convention that “government is the only thing we all belong to” [ sic ]. In spite of the communitarian language struck at the Convention, the actual underlying theme is that the State is needed to ensure our individuated liberty”and thus, the particular emphasis upon sexual liberation for women (and, presumably, men as well). In an admirable display of philosophical consistency and logic, the Obama administration thus implicitly and effectively endorsed the Hobbesian liberal ontology that there ought exist only individuals and the state”all other competitors are to be regarded as oppressors, and require an expansive and empowered government for individual liberation.

This is just the way in which the HHS mandate has been justified. At a recent conference in which I participated at the Georgetown Law Center, a number of speakers and participants described the HHS mandate as the necessary requirement that will liberate women from the “coercion” of the Church that seeks to restrict their access to free contraception”including abortifacients”and sterilization. The expansion of state power is justified for its liberative effects, freeing women from the oppression of an antiquated institution (its irrelevance was reinforced by frequent citation of the questionable statistic that 98% of Catholic women use contraceptives).

Note the conceit: Employees at Catholic (or other similarly informed religious institutions) are “coerced” by not having free contraceptives provided as part of their health plans. The state, through the threat of punitive fines (estimated by President John Garvey of the Catholic University of America to be $62 million per year should CUA refuse to comply), acts as the liberator of these oppressed people. This narrative seems plausible to many, because we have been deeply shaped and trained to associate the word “liberty” with the freedom of individuals “to pursue their own ends””requiring, among other things, the liberation of recreational sex from any consequences”and not the rights, privileges, immunities and liberties of groups, societies, associations, even a corpus mysticum like the Church. In such a view we find Leviathan run rampant.

During the bloody twentieth century, the Church stood against the totalitarian ambitions of Fascism and Communism. A third ideology is clearly flexing its muscles today”threatening to make those victories of the last century merely Pyrrhic. The totalitarian impulse today is embedded in the very logic of liberalism, which seeks to expand its dominion into every aspect of life and against every competitor to its demand for the exclusive allegiance of individuals. We need to keep firmly in mind the picture that adorns the Leviathan , and resist our absorption as individuals into the body of the state by retaining deep, abiding, and even primary allegiance to family, locality, and Church.

Patrick J. Deneen is an Associate Professor of Political Science at the University of Notre Dame. His previous “On the Square” articles can be found here .

Bloomberg, Obama Lead Over Romney Similar to 2008 Margin Over McCain

DNC Video: “The Government Is The Only Thing We All Belong To”

Berkley Center, Contraception and Conscience: A Symposium on Religious Liberty, Women’s Health, and the HHS Rule on Provision of Birth Control Coverage for Employees (See, for example, the question posed during Panel 3, at 1:25:40)

The American Catholic, 98% of Catholic Women Use Birth Control