The art series to which this essay refers will be on display in the First Things offices beginning on November 29. For more information on this exhibition, including details about an opening night event, please click here .

From the beginning, Christians have had to decide how they want to relate to culture. Many of us make this decision subconsciously based on events, belief systems, and personal experiences that form who we are. In his well-known book Christ and Culture, H. Richard Niebuhr identified five possible ways in which Christians have chosen to view and interact with culture. While most of us will only express our ultimate decision through conversations with friends, colleagues, and family, Christians in the arts have the unique position of sharing their struggle and resolution with a greater audience. Each time they write a song, poem, novel, or paint a canvas, build a sculpture, or perform in a play, they are revealing their convictions on how Christianity and culture should relate. In the paintings currently on view at the First Things Gallery, artist Wayne Adams grapples with Christianity and the presence of God.

Over the last few years, Adams has been working on a series of paintings that feature bold chevrons running across the canvas, or diagonal lines radiating out from a triangle anchored to the bottom of the canvas. By alternating stark, solid lines with a multi-layered, colored background, Adams activates the space on the canvas creating a viewing experience filled with energy.

More recently, Adams has developed another series with an even more simplified composition consisting of a single triangle with its base resting on the bottom edge and peaking near the top of the canvas. Despite the minimal subject matter, Adams keeps the work as animated as his previous paintings by switching from stretched canvas to a stretched synthetic fur. The tactile qualities of the thick fur stand in contrast to the luminous triangle of paint that has tamed and matted down the hair.

In Rift (Lavender) the lone painted triangle is set on a canvas of stretched white synthetic fur. The shape starts out white at its peak, and gradually the paint takes on a light lavender hue as the base of the triangle slowly widens. Following the progressive change the viewer becomes drawn into the heart of painting, only to discover it is simply a void. It is this void, and similar voids found in his other works that save Adams’ paintings from being simply a well executed painting.

The void has taken on a special meaning for Adams in light of Slavoj Zizek’s The Fragile Absolute. Using Ukrainian abstract artist Kazimir Malevich’s seminal painting, Black Square, as an example, Zizek argues that the void plays a crucial role in modern art. Asserting that all innocence has been lost, Zizek claims that an object is no longer considered art “simply [on] its direct material properties, but [by] the place it occupies, the (sacred) Place of the Void of the Thing.” In other words, objects become art when they function as the place where the void can exist. Before the loss of innocence, the void had served to establish a distinction between the sublime and the mundane. But as that gap has narrowed and disappeared with the commodification of culture and our loss of a sense of the holy, art must become the void itself in order to re-establish the very idea of the sacred.

Adams takes this theory a step further by focusing not only on how his art can create and exist within the void, but also seeking how his faith relates to this new situation. By using a triangle instead of Malevich’s square, Adams evokes the Trinity and sets up the image as not only an absence of the sacred, but also of the sacred place itself where God exists. 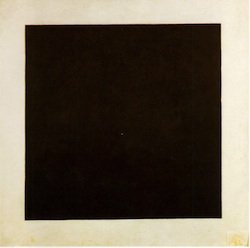 Solidifying this view of God in the Void is the appearance the triangle gives of being a slice into flesh, bringing to mind the act of atoning for sin through animal sacrifice in the Old Testament. In this way it is fitting that the fur is artificial, as the sacrifices given by the Jews, while pleasing to the Lord, were not enough to blot out the sins of humanity, but acted as shadows of the forthcoming crucifixion of Christ. More significantly, the partial foreshadowing of Christ’s oblation in animal sacrifice set up the void in which his sacrifice could exist by revealing the distance between the earlier attempts at sacrifice and their fulfillment at Calvary.

Similar elements can be found in Adams’ abstract paintings with chevrons and radiating lines. The triangle appears here as well, once again serving as a reference to the Trinity. But these works, with the more chaotic backgrounds and the superimposed order on top, appear to focus more on the struggle to reach the (sacred) place, rather than achieving it through establishing a void.

By exploring themes of philosophy and theology in his work through the formal qualities of space, line, and color, Adams engages Christ and culture in his art. Whether his engagement reflects Niebuhr’s description of Christ and culture standing in tension and paradox, or whether Adams is seeking a more active form of evangelization”Christ as transformer of culture”is harder to say.