I think we should blame President John F. Kennedy for National Geographic Channel’s Doomsday Preppers . It was his loose Cold War talk on nuclear survival that launched the doomsday survival business, I bet. He told Americans that if any of them expected to survive immediate annihilation from fire, blast, and vaporization in a thermonuclear exchange they stood a better chance of survival with a personal bomb shelter.

“The time to start [building] is now,” he told the country in a televised speech October 6, 1961. “In the coming months, I hope to let every citizen know what steps he can take without delay to protect his family in case of attack. I know you would not want to do less.” He promised shelters for everyone and Congress voted a ton of money to locate, identify, and stock fallout shelters for public use.

The year following saw the October Cuban missile crisis. During those thirteen days, Americans grabbed food off shelves and sent gas prices up. Interestingly, it was during the Kennedy Cold War years that a coincident chronic silver coin shortage developed. It wasn’t relieved until after 1964 when copper-nickel coinage replaced ninety-percent silver coinage. Americans were thinking doomsday, and some were stocking up. 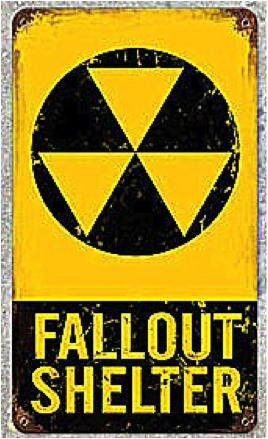 There was the influence of apocalyptic literature before the 1960s, and much since, so I guess I can’t blame Kennedy entirely. In both The Scarlet Plague (1912) and Earth Abides (1949), civilization is done-in by disease. Alas, Babylon (1959) follows Florida survivors after nuclear war. The limited nuclear exchange told by Warday (1984) sees New York City abandoned and California not. The valiant defenders of society in The Postman (1985) battle “hypersurvivalists” preying on decent folk who just really want reliable mail delivery. One Second After (2009) reduces U.S. population in successive die-offs from three hundred million to thirty million following an electromagnetic pulse assault. Yet, whatever the cause, the connecting theme is the disintegration of American society and the plucky people who survive.

I met my first survivalist (a term that has spooky-kooky connotations survivalists hate) in the seventies. He was a pastor who was the Ohio Council of Churches’ legislative lobbyist. He and his wife were both committed survivalists and otherwise entirely normal. They had a cabin far from the maddening crowd, stocked, safe, and secluded near the Ohio River. I had the impression it was bristling with weapons and freeze dried food.

It gets you thinking, you know. Being an insulin-dependent diabetic, my own survival beyond the first ninety-day die-off is unlikely, but I know how to make “survivalist insulin.” All I need is a pig and its pancreas, five c.c. of concentrated sulphuric acid and, oh, an anatomy book to show me exactly what a pancreas might in fact look like. But get me a pig, a centrifuge, electricity to run it and a gun to protect it, and I am good to go.

I would not rate very high on the “prepper score” from Doomsday Preppers . Neither do any of the preppers, for that matter. I’ve yet to see anyone score a hundred; most fare much lower. Oh, you’ve guessed. Yes, I do sometimes watch it. I feel like a gawker at a train wreck, but mostly I like figuring out the flaws in their plans before the experts weigh in. One guy decides he needs a couple more black-powder cannons, back-up for the one that always misfires. How about just one cannon that really works, if you need a cannon. It should not, I’d like to tell one lady, take two hours to bug out. Nor do I think the family rushing rubber rafts to the nearest waterway is an especially good way to escape a Virginia coastal tsunami. I can’t decide what’s scarier: the thought of social and economic collapse or the idea these might be the people to survive it.

Yet there is a core segment of folks deeply determined on exactly that: survival. The Y2K freak-out in 2000 and the threatening rattle of 9/11-style terrorism, TSA pat-downs for three-year-olds, the sour failures of FEMA, debt ceiling and national debt: All these and more nourish uneasiness about the way things are headed, and a speculative wistfulness. The task of negotiating the twenty-first century leaves us all wishing for something a little more basic, simpler.

The prospect of a world collapsing under the weight of its own folly would take care of everything, including the annoying neighbors, the idiot boss, and the federal government. Somehow the gap between what we expect and what we actually have widens to the extent that just starting over from scratch, wiping the old slate clean, seems like the only escape and the only hope.

Russell E. Saltzman is dean of the Great Plains Mission District of the North American Lutheran Church , an online homilist for the Christian Leadership Center at the University of Mary, and author of The Pastor’s Page and Other Small Essays . His previous On the Square articles can be found here .