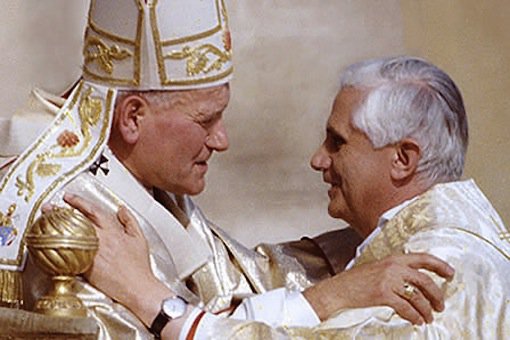 With the announcement of his resignation, Pope Benedict signals the end of the heroic generation. No longer will the Catholic Church be run by a man who was a participant at the Second Vatican Council, the three years in the life of the Church that have defined so much of the last fifty.

Joseph Ratzinger was one of the young turks at the council. A wunderkind theologian, he served as peritus for Cardinal Frings of Cologne. It was Frings who led the successful opposition to efforts by Vatican officials to turn the council into an affirmation of the status quo, often giving controversial speeches ghostwritten by Ratzinger.

Allied with Karl Rahner, Hans Küng, and others, Ratzinger wanted to give the Church a warmer, more immediate, open, and effective witness, one capable of engaging the questions and challenges facing “modern man.” This made him something of a radical. In his contribution to a commentary on the documents of the Second Vatican Council, Ratzinger went so far as to criticize Dei Verbum, The Constitution on Divine Revelation, for not saying outright that tradition is properly subordinated to Scripture.

His work at the council reflected his experience as a young seminarian and priest. After World War II, the Catholic Church in West Germany supported the Christian Democratic Union, Konrad Adenauer’s inter-confessional movement. This put an end to the Catholic Centre Party, which was a legacy of the Kulturkampf , the period of intense conflict in the late nineteenth century between the Catholic Church and the Protestant Prussian State.

German Catholicism was not only entering the political mainstream; it was undergoing a remarkable intellectual revival. Guardini, Rahner, Pieper, von Hildebrand, Adam: The Church of Ratzinger’s youth had a confident, creative, influential voice that allowed Catholicism to join with modern humanism to rebuild Europe after the horrors of Nazism and against the threat of Soviet domination.

That’s why Ratzinger’s youthful radicalism was one of confidence in the Church, not doubt. When he went to the Second Vatican Council he wasn’t thinking about how to fix a broken Church. He was part of the generation that was confident that, with the right changes, the Church’s strengths”her ability to play a central role in the public life, her intellectual vitality, her muscular sanctity”could become still more effective. Thus he has insisted on a “hermeneutic of continuity,” which means reading Vatican II as a deepening rather than a rejection of what came before.

Ratzinger fought an intellectual battle for sanity in the long decade of theological insanity that followed the council. When he was appointed as head of the Congregation for the Doctrine of the Faith by John Paul II in 1981, he was no longer a young turk but instead the pope’s “Rottweiler.” But his early experiences remained. Benedict XVI was formed with an essentially positive view of the Church’s engagement with modernity.

The next pope won’t be shaped by the successes of post-war Catholicism. A conversation I had with Christoph Cardinal Schönborn drove this home to me. I asked him about the greatest challenges he faced as a young priest. He replied by recounting painful memories of men leaving the priesthood and his beloved Dominican order suddenly giving up its traditional discipline of life. For him and men of his generation, the formative experience was quite different from Benedict’s. Their memories as young priests are of the sudden, profound, and debilitating disorder that overtook the Church in the immediate aftermath of the council. The world came apart, and the Church with it.

This difference will make a difference. We have lived through fifty years of self-inflicted wounds, some very deep. John Paul II and Benedict XVI felt these traumas, of course, and they responded effectively. John Paul II spoke forcefully about the non-negotiable objectivity of moral truth and the unity of faith and reason. Benedict XVI emphasized the renewal of the liturgy and promoted firm theological standards. They knew that the Church cannot be salt and light if she is not true to herself.

The next pope will continue along the same lines, pressing forward with the reform of dysfunctional religious orders already underway, as well as securing greater consistency in seminary training. He will no doubt remind our relativistic culture of the reality of objective moral truth. But the tone will change. He’ll know firsthand the foolishness of playing footsie with the increasingly hostile secular culture in the West.

This won’t mean a retreat from the Second Vatican Council and its wonderful confidence in the culture-shaping power of the gospel. The heroic generation will remain heroic. But a man who came of age when the Church was falling apart will know in a deep, primitive way that even sound teaching is empty and faithful proclamation ineffective when the household of faith is in disarray.

Thus my prediction: The college of cardinals will give us a pope who knows in his bones that the evangelical power of a Church rests in its ability to stand against the world with both a spirit of charity and a coherent, effective inner discipline. Only then can the world hear again the gospel and choose to stand with the Church.

R.R. Reno is Editor of First Things . He is the general editor of the Brazos Theological Commentary on the Bible and author of the volume on Genesis . His previous “On the Square” articles can be found here .