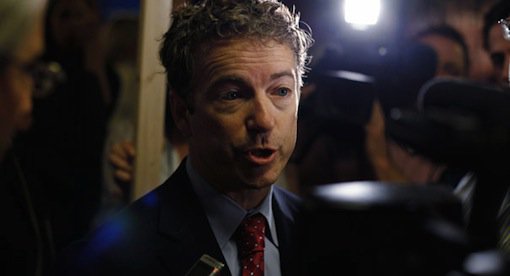 This is a frustrating moment if you believe in limited government. The statist left seems to be ascendant. We are on the path to a full government takeover of healthcare as premiums rise and Obamacare unravels the system of employer-provided health insurance. The failure to implement entitlement reform means that we are on the road to sharply higher taxes. The mayor of New York wants to ban large sodas, and the governor of New York proposes a law that would allow state regulators to shut down religious hospitals that refuse to provide abortions. It can feel like we are entering an era of statism in which whatever is not forbidden is mandatory.

The most obvious impulse is to oppose, to become the negation of the left. We will oppose big government and we will stand for freedom. No to your spending, no to your taxes, no to your regulations, and no to your everything. The opposite of Obama-Bloomberg-Pelosi-Cuomo technocracy is liberty. Leave us alone. This reactive libertarianism has the virtue of offering a clear principle to distinguish us from our opponents.

But it is not enough. It is not enough because Obama and Pelosi (whose House Democrats got more popular votes than the House Republicans) got where they are by winning elections. They won elections because they spoke to people’s concerns. Even if Obamacare is repealed, the problems of the uninsured and the anxieties of the currently insured will continue. Rising premiums will continue to erode living standards. Medicare as it’s currently structured will remain unsustainable, and yet we will continue to have a broad consensus in favor of subsidizing the catastrophic health care costs of the elderly.

There is no reason to believe that undoing the work of Obama will reconnect lower-skilled men to the job market as the decline in labor force participation for this group predates the Obama presidency. This is the hole in our center-right politics, and it cannot be filled simply by a program of spending restraint (though such restraint is necessary) and high-earner tax cuts. The politics of limited government needs to have an interest in the problems of our middle and working classes.

Let’s look at Rand Paul’s speech at CPAC. I like Rand Paul and find his awkward earnestness much more appealing than the more polished oratory of a Marco Rubio. There is a lot in Paul’s CPAC speech, but I would like to focus on the relatively boring part about domestic economic policy. There are plenty of things for conservatives to like in this speech. We should oppose “too big to fail” for banks. We should oppose subsidies to “green” energy companies.

The problem appears when Paul gets to what he supports. Paul wants to cut spending much faster than Paul Ryan does, and he wants to implement a 17 percent flat income tax. I can see why this is an exciting proposal, but the problems that predated Obama are all still there. The problems of the uninsured are still there. What is the distributional impact of going to a 17 percent flat tax? What percentage of the audience that is cheering him would see a tax increase?

Doesn’t this sound familiar? Who thinks Mitt Romney lost because people thought he would tax the rich too much and over-regulate business? At its core, the Rand Paul economic message is not a repudiation of Romney’s tactical and policy errors. Rand Paul’s economic program is an exaggeration of Romney’s errors.

At one point Rand Paul says:

We need a Republican Party that shows up on the south side of Chicago and shouts at the top of our lungs “We are the party of jobs and opportunity. The GOP is the ticket to the middle class.”

Yes we do, and I don’t doubt Paul’s sincerity. But people on the south side of Chicago and every side of lots of cities and suburbs are going to have pressing concerns that will not be satisfactorily answered by pointing to a flat tax. What happens if I get laid off, lose my employer-provided health insurance, and can only find part-time jobs that add up to forty hours a week but don’t include benefits? What about those people who are outside the insurance system and have preexisting conditions? How will Medicare be there for my parents without crushing us with new taxes? How do we make higher education more affordable? How do we make it easier for parents to support their children by working?

All of these issues are higher priorities than cutting taxes on high earners. Most people know enough to understand that dropping the top marginal income tax rate from 40 percent down to 17 percent will do little or nothing to deal with these problems. Even if Rand Paul has the right policy with his flat tax proposal (and I strongly suspect he doesn’t), his emphasis is still all wrong. If the average American sees a constrained choice between big government liberalism and what sounds like an on-your-own conservative politics, big government will win.